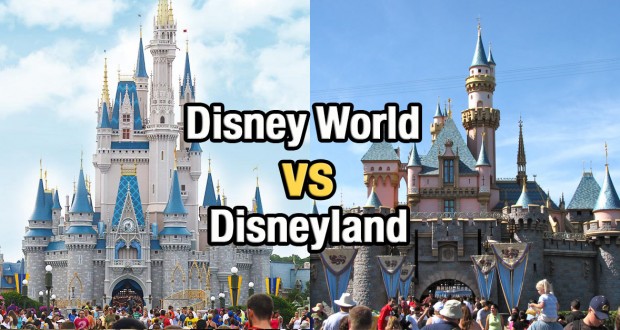 Disneyland and Disney World may be related by name, but there are some glaring differences between the two parks. They may be separated by three time zones and two thousand miles of land, but they both stay true to the core Disney values. We’ll take a look at what makes these parks so different, while also remaining alike.

It is hard to forget the first time you approach the entrance to Walt Disney World while heading down World Drive. You are greeted by a massive archway that stretches over five lanes wide welcoming you to Walt Disney World. Children and adults alike get a bit giddy knowing you really are entering the place “where dreams come true.” It is a bit off the beaten path, and visitors new and old begin to get immersed into the magic that is Walt Disney World. Unfortunately, it is completely the opposite at Disneyland. Walt Disney’s maiden theme park is thrown right in the middle of downtown Anaheim. Second rate motels, busy streets, and chain restaurants sit right outside the park’s walls. It is very hard to go to Disneyland for the first time after you’ve been spoiled in Florida. Guests are shuttled across busy streets in Toy Story themed buses while fighting the hustle and bustle of Anaheim. When you get inside the park, the city feeling subsides, but it still is no comparison to being down in central Florida.

4) Where It All Began

The vintage and nostalgia that permeates through Disneyland is second to none. This was the beginning of Walt’s vision and you can see that with the tributes to him and his family throughout the park. After watching Saving Mr. Banks, I made sure to look for all of the subtle hints and gestures Tom Hanks gave throughout the park while reprising the role of Walt Disney. I am a bit surprised some of Walt’s favorite attractions that made it into Walt Disney World weren’t in Disneyland, especially The Carousel of Progress. If you are a Disney history buff and appreciate the intricacies of Walt Disney, Disneyland is the epicenter of Disney culture.

It could have been that I hadn’t been on an attraction in a while but I felt like the thrill rides at Disneyland and California Adventure, were MUCH faster than their siblings in Orlando. Rides like Space Mountain and Thunder Mountain felt almost double the speed than what I was used to feeling in the Magic Kingdom. Even the drop of Splash Mountain seemed much steeper and faster than the one at Walt Disney World. California Screamin’ wasn’t as fast as something like Aerosmith, but still gave the riders a good charge.

Do you ever ride an attraction that you felt like it was over before it started? That is one feeling I didn’t get at Disneyland. The attractions seemed much longer than those in Walt Disney World, especially the thrill rides. Not only were they faster as I mentioned above, they seemed to last longer than typical ride times. Space Mountain, Indiana Jones, Buzz Lightyear, and Thunder Mountain all were noticeably longer than their Florida counterparts. This could be due to crowd control and trying to get more people on the rides due to longer wait times in Orlando. Your wait times are nearly as long as you see in Florida either. The longest I waited in line was fifteen minutes, it was also on a weekend as well.

This should come as no surprise to anyone that this is the number one differentiator. The size of Walt Disney World in Orlando completely trumps what the original park is in Anaheim. I’d be willing to bet the parking lot of any of the Florida parks would equate to the size of all of Disneyland. Your first view of Sleeping Beauty castle really tells you all that you need to know. It is a microcosm of the Cinderella Castle. Both parks in Anaheim are doable for the average park goer in a single day. You could compare the time to do both parks to doing Animal Kingdom or Hollywood Studios.

If you are a fan of Walt Disney and everything that Disney stands for, visiting Disneyland is a must. You’ll be in for a shock when you see some of the glaring differences that were discussed above, but you’ll be pleasantly surprised as to how they remained true to the core Disney values. To visit the place where Walt Disney’s vision and dream became a reality is as good as it gets for any Disney fanatic. The best advice I can give is to manage your expectations going into it and really take in the history and nostalgia that Disney created in his original project.

BONUS TIP: Whether you visit Disney World or Disneyland, consider planning and booking your next magical vacation through an Authorized Disney Vacation Planner like Mickey Travels. They’ll help you get the best price for your vacation, share expert advice and their services are totally FREE! It’s genius!