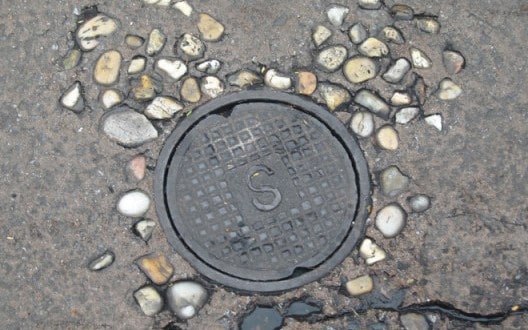 Hidden Mickeys are yet another little touch of Disney magic that really exemplify the wonderful attention to detail that Disney are good at. Whilst Hidden Mickeys have never actually been properly acknowledged by Disney themselves, this unofficial scavanger hunt is beloved by guests, cast members and imagineers alike. Read on for ten things which make the Hidden Mickey hunt so great.

8. What is a Hidden Mickey?

The term ‘Hidden Mickey’ is so often thrown around by fans, with guides to finding them even being sold in many gift shops across the parks, but what exactly constitutes a Hidden Mickey? ‘True’ Hidden Mickeys must be hidden and they must be intentional. Mostly they’re found in the classic Mickey silhouette with one circle for the head and two, slightly smaller circles for ears – these ears must be in contact with the head, must not touch each other and must be correctly proportioned, not with one ear bigger than the other or something like that!

7. Where did Hidden Mickeys come from?

Hidden Mickeys are thought to have come about during the development of Epcot, which was originally developed as a more ‘adult’ park which would be selling alcohol. Because of this, the original intention was that no Disney characters would be included in the park. Some Imagineers took this as a challenge and began to hide Mickey profiles in their designs for the park. Whilst the ‘no Disney characters’ attitude to Epcot soon changed after the park’s opening, the tradition of the Hidden Mickey had been born.

Not all Mickeys are hidden, some are deliberately and obviously placed as part of the decoration of the park, such as Mickey ears on the tops of lampposts, or the iconic ‘Earful Tower’. These aren’t officially counted amongst the Hidden Mickeys, due to their lack of being hidden, however they’re still fun to keep an eye out for and really add that extra touch of magic to the parks.

The story goes that during the creation of Animal Kingdom’s Expedition Everest, the lead Imagineer didn’t want to include an Hidden Mickeys in the attraction – but this didn’t stop his team! Expedition Everest is home to two of the most impressive (if a little questionable) Hidden Mickeys in the parks. The first one can only be seen from above, with the ride itself being a Hidden Mickey! The second can only be seen at night from the right viewpoint, as the lights cast a side profile shadow of Mickey onto the side of the mountain.

It’s not just Mickey who has been hidden around the parks by Imagineers over the years. Many other beloved Disney characters have also received this treatment, with one notable example being found in the Pangani Forest Exploration Trail in Animal Kingdom. Here, as you watch the gorillas from the suspension bridge, a large rock in the form of a Hidden Jafar watches you leave! Many people miss this one, which is astounding considering quite how big it is!

Another fabulous hidden character can also be found in Animal Kingdom. This cutie is easy to overlook and sometimes even covered up by a curtain – a patch of concrete on the wall in the small seating area behind Tamu Tamu Refreshments shaped like a side profile of Baloo (the bear from Jungle Book).

1. The biggest Mickey of them all.

From one extreme to the other – millions of guests have been walking over one of the biggest Hidden Mickeys in existence for decades with probably only a fraction of them realising just what they were stood in the middle of. Disney’s Hollywood Studios plays host to a Hidden Mickey on an impressive scale, with the entire hub of the park creating not just a silhouette but a full on Mickey face. Changes over the years have begun to obscure this feat, but in essence it’s still there and even visible on the park maps once you know where to look, with the Chinese Theatre being the base of the face, where the Sorcerer’s Hat stood the nose and Echo Lake being his right ear. Though partly obscured by trees, different coloured paving also created his eyes, smile and the edge of his face, whilst the roof of the buildings opposite Echo Lake were once painted to show his left ear. Despite being partially obscured, this remains one of the biggest and most elaborate Hidden Mickeys out there.

The search for Hidden Mickeys has delighted Disney fans of all ages since the opening of Epcot and has spread out beyond the parks and across the entirety of Disney’s output – have you caught the bug yet?