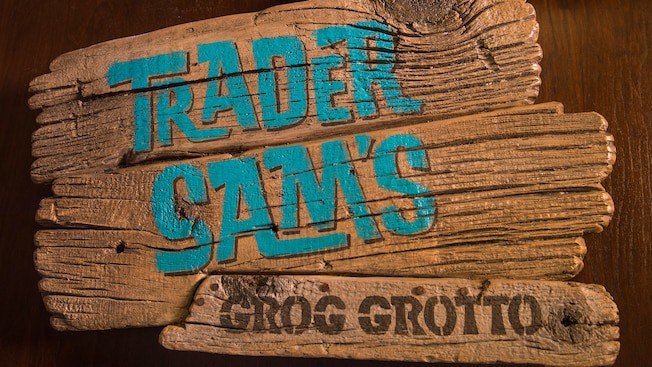 Trader Sam's Grog Grotto is the Walt Disney World counterpart to Trader Sam's Enchanted Tiki Bar, located all the way over in Disneyland. As such, it sports a lot of the same kinds of decor inspired by things like the Jungle Cruise Ride, tiki culture, and other Adventureland staples. Behind its unassuming entrance door you'll find plenty of Sam's shrunken heads, amusingly kitschy toys and other novelty items everywhere, and a great view of a volcano outside the "window".

However, it does also include a bit more nautical theming in its design compared to its west coast cousin, in a nod to the 20,000 Leagues Under the Sea: Submarine Voyage attraction that used to exist in the place where you'll find Seven Dwarfs Mine Train today.

Not only is the decor worth checking out, so are the various special effects that come into play while you're there, typically in response to certain drinks being ordered by your fellow patrons. Depending on what gets ordered, you might find that the volcano out the window starts to erupt, or that the vengeful Tiki goddess Uh Oa awakens from above, casting a menacing glare over the room.

It almost feels more like being inside an immersive Disney World attraction than a Polynesian-themed speakeasy.

Not only do the special effects make your time in Trader Sam's Grog Grotto a more engaging one, the bartenders there also lend a lot of fun to the experience. They like to play along with the lounge's various special effects, whooping and hollering and even blowing bubbles all as they continue serving drinks to guests.

If you thought the drink effects in Grog Grotto were awesome, wait 'til you see the cups they come in that you get to take home with you:

5. A Taste of Island Lifestyle

The drinks aren't all you'll want to order at this lovely establishment. You'll also want to dig into one of their shareable appetizer plates, like their kálua pork tacos or their pan-fried dumplings. If you've got a much bigger appetite to sate, we recommend heading over to 'Ohana instead to feast on their buffet of offerings.

See what I did there? “To a point”? As in Trader Sa...you know what, never mind.

Anyway, one thing that's nice about Grog Grotto is that it's perfectly family-friendly for a few hours following its afternoon opening time. Parents can feel free to bring their children and share some small plates and non-alcoholic beverages like the Skipper Sipper, Polynesian Punch, or the Schweitzer Falls.

While we adore the indoor lounge above all else, there's something to be said about the outdoor open-air portion of this location, known as Trader Sam's Tiki Terrace. They serve the same menu found inside, but with lots more seating and the Florida sky above. There's often live music being played out here, and the overall vibe is much more calm and relaxed than the zany antics taking place inside.

We could go on and on about this place, but suffice it to say that you should just go there and try it for yourself! No amount of words we write will capture the charming wackiness you'll experience when you visit Trader Sam's Grog Grotto. Just don't say we didn't warn you.

Left 4 of 4 right
Next: Reasons You Will Love Teppan Edo Japan In Epcot