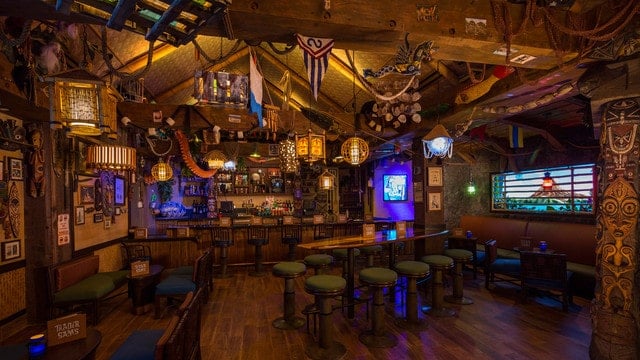 Whether or not you're able to pass up such a tempting deal, did you also know that Trader Sam's has his own casual dining experience at Disney's Polynesian Village Resort? It's called Trader Sam's Grog Grotto, and you're gonna love giving it a try—and don't worry, your head is in no danger there! Disney Fanatics who have ridden Jungle Cruise in Magic Kingdom a hundred times have already heard many variations of the Trader Sam joke:

“Here's old Trader Sam, head salesman of the jungle. Business has been shrinking lately, so this week only, Sam's offering a two-for-one special: two of his for one of yours! Either way you slice it, you'll always come out a-head!”

Trader Sam's Grog Grotto is the Walt Disney World counterpart to Trader Sam's Enchanted Tiki Bar, located all the way over in Disneyland. As such, it sports a lot of the same kinds of decor inspired by things like the Jungle Cruise Ride, tiki culture, and other Adventureland staples. Behind its unassuming entrance door you'll find plenty of Sam's shrunken heads, amusingly kitschy toys and other novelty items everywhere, and a great view of a volcano outside the "window". However, it does also include a bit more nautical theming in its design compared to its west coast cousin, in a nod to the 20,000 Leagues Under the Sea: Submarine Voyage attraction that used to exist in the place where you'll find Seven Dwarfs Mine Train today.