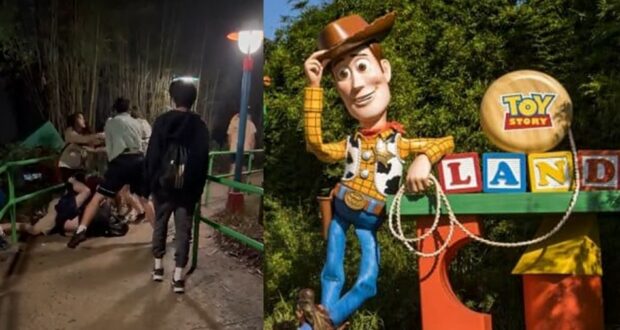 VIDEO: Another Fight Breaks Out, This Time in Disney’s Toy Story Land

Unfortunately, we have some not-so-positive news to report. It seems like despite the Disney bubble, known as “the most magical place on earth”, anger still erupts, and fights happen. We are learning of a fight that broke out in what appears to be Disney’s Hollywood Studios at Toy Story Land.

It doesn’t seem like it was too ago that we celebrated the grand opening of Toy Story Land at Disney’s Hollywood Studios in 2018. The land consists of three attractions including the popular roller coaster attraction, Slinky Dog Dash, Alien Swirling Saucers, and the original attraction, Toy Story Mania. You’ll also find the massive statues of beloved Toy Story characters such as Sheriff Woody and Buzz Lightyear.

While Toy Story Land is the focus of this fight, it was just recently that we saw a fight break out at Walt Disney World Resort’s EPCOT at Disney’s “Living With the Land” attraction as previously shared here.

The group in this fight however look like they are in the queue for the popular Toy Story Land attraction Toy Story Mania. @itsDrewDavid posted the video to Twitter with, “Disney is so ghetto raise ur annual pass prices lmfao”.

Here’s the video of the fight below:

It seems like a Disney Cast Member hurries off, hopefully, to call for security to help with the situation. @itsDrewDavid goes on to comment with, “they lost toy story mania so they fought it out in the exit smh. no idea why they fought”:

What we do know is the crowd around the Toy Story Land fight is yelling for the fight to “STOP” as you hear again and again in the video. The video comments on the post are those such as “I hope they get banned” and “so sad”. We personally know it’s extremely disappointing to see such a fight evolve despite being located in the queue for such a child-friendly attraction as Toy Story Mania.