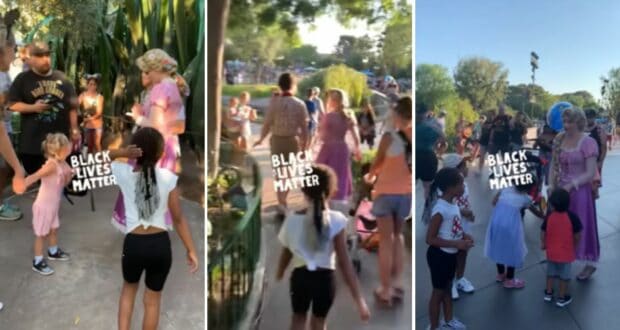 It wasn’t too long ago that a video from Sesame Place, a theme park in Pennsylvania, shows a character seemingly greeting white kids but ignoring black kids during a parade, as shown in the video below. The incident has sparked racism backlash for Seasame Place:

Now, a new video posted to social media on July 29, 2022, has been posted by a parent of two young black children which seemingly shows the children being ignored by Princess Rapunzel at Disneyland.

@lo.ondabluff took to Instagram to share the video, noting, “Please repost this racist a** sh** kids shouldn’t have to go thru this in 2022 our money spends kust like there’s just for them to treat our kids like they don’t belong.” Here’s the video below:

The video shows the family approaching Rapunzel. As the black girls rush ahead to meet Rapunzel, the parent tells them that they need to get in line. The parent asks the Cast Member with Rapunzel about the line, but you can hear in the video they state there isn’t a line. The character is just walking around.

Rapunzel takes one more photo, but when it looks like it’s time for the children’s moment with Rapunzel, the Disney Princess turns around and begins walking away. The kids shout, “what about us?”

The parent mentions in the video that this is “just like Elmo” – referring to the Seasame character incident. The parent shouts, “Excuse me, ma’am, you waved at everyone except for them.”

Rapunzel stops again to greet other Guests. The video ends the moment it looks like Rapunzel turns to acknowledge the two children.

Currently, no further updates have been shared regarding the incident. We will be sure to share further details as they are received.