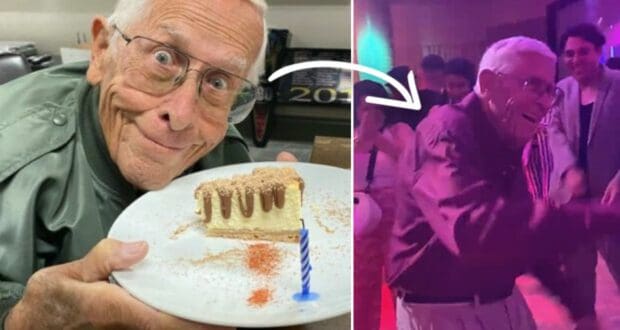 Disney Legend Bob Gurr, is well known among Disney fans as his long list of tremendous works with The Walt Disney Company are some of the most iconic Disney experiences today. Now, at the young age of 90, Gurr took his weekend to the next level by tearing up the dance floor!

Recruited by Walt E. Disney himself, Gurr took his Imagineer achievements to the next level with Walt Disney World Resort and Disneyland Resort involvement in Disney Park attractions and experiences such as Matterhorn Roller Coaster, the Disney Monorail systems, Autopia Cars, and the iconic Haunted Mansion. He landed the title “Disney Legend” when he was inducted in 2004.

Just this year, Gurr shared that he finally got his first ever tattoo of a “1959 Disneyland Monorail MkI” at the age of 90. And Gurr’s youthful spirit isn’t stopping there!

On the weekend of July 29 – 31, 2022, the Legendary Imagineer attended the Midsummer Scream Halloween and Horror Convention in Long Beach, California. He was featured at the Haunted OC booth for his “Doom Buggy” creation for the Haunted Mansion attraction.

As the convention came to a close, Bob Gurr took to the dance floor!

A social media video posted by @spiritedwords tweeted, “Blessing your timeline with Imagineer Bob Gurr absolutely tearing up the dance floor at @MidsummerScream. Until the morning.” Check out the video below:

We can’t help but smile along! Way to go, Bob!

Not only is Bob Gurr known for being active at the age of 90, but Disney Legend and Mary Poppins (1964) star Dick Van Dyke keeps up with his dance moves at the age of 96 with a recent music video he shared with his wife.

We can only hope that when we are in our 90s, we are in this shape to bring similar joy to those around us!