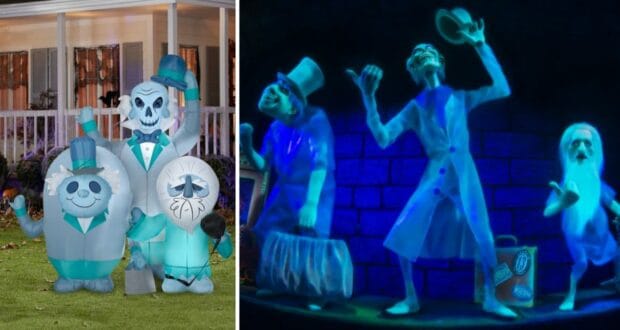 Grim grinning ghosts are coming out to socialize at Target! Yep, you read that right, Target has added a Haunted Mansion Hitchhiking Ghosts inflatable that is definitely going up in our yard this year.

Target is on a Disney inflatable roll! We previously shared the enticing 6-foot-tall inflatable Ursula is currently for sale. But now Target is featuring an inflatable that is sure to produce a few happy haunts that we can’t pass up.

The Haunted Mansion at Walt Disney World Resort and Disneyland Resort has been an iconic attraction since it first opened. The frightfully-fun ride features a doom buggy that takes Guests through the mansion with special visitors from Ghost friends along the way. The has three friendly ghosts known as the “Hitchhiking Ghosts.”

We’ve seen this Disney Hitchhiking Ghosts inflatable before, and it tends to sell out fast, so don’t wait. Visit Target to snag yours to add to your Halloween decoration display this year. Happy shopping, Disney fans!