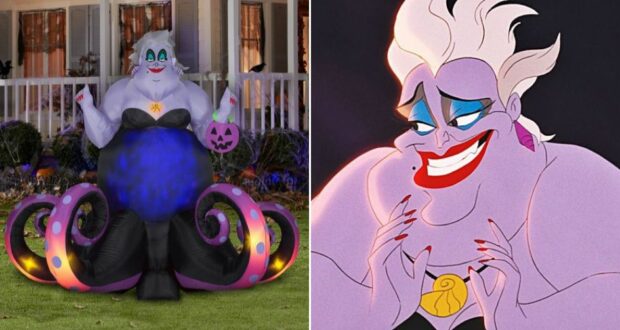 Target Is Selling a 6-Foot Inflatable Ursula, and We Want One!

“Life’s full of tough choices, isn’t it?” Well, typically yes – but when it comes to this Ursula inflatable… no choices need to be made… we want one!

Disney’s animated film, The Little Mermaid (1989), is one many Disney fans grew up with. And while we love all things, Ariel, there is just something about the villainous Sea Witch that entices us with her evil energy.

With Disney preparing to roll out the live-action adaptation of The Little Mermaid in 2023 with Halle Bailey playing Ariel and co-stars such as Emily Coates, it’s been one we’re eagerly awaiting the arrival of.

The full Cast has now been revealed, including Ursula being played by Melissa McCarthy. Popular singer Lizzo also apparently auditioned for the role of Ursula and took to social media to share her disappointment in not landing the role over McCarthy.

We already know the filming has wrapped, and lyricist Lin-Manuel Miranda has shared details about the music. Disney anticipates releasing the film in 2023.

But, why not get into The Little Mermaid spirit this Halloween season as your neighborhoods will be frightfully surprised to see a 6-foot Disney Villain Ursula on your lawn!

“Amaze your guests with this animated Airblown inflatable character. Ursula from Disney’s The Little Mermaid moves her tentacles and features a realistic flame effect. It self-inflates in seconds and comes with everything needed for easy outdoor setup. Just plug it in, stake it down and watch the magic unfold. Display this spooky Halloween decoration as a standalone or combine it with other Airblown® Inflatables to create a custom scene”.

YES! We’ve seen this Disney villains inflatable before, and it tends to sell out fast, so don’t wait. Visit Target to snag yours to add to your Halloween decorations this year. Happy shopping, Disney fans!