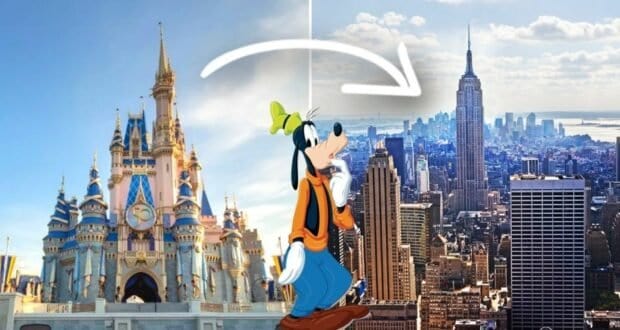 It’s an interesting time to be a Disney fan. In light of recent events, should Disney make the move to the “big apple”? Walt Disney World relocating to New York is trending on social media.

Unfortunately, while we like to keep a look at the positive pixie dust fluttering throughout the Disney Parks, The Walt Disney Company is at the center of issues that are making matters turn political.

All eyes are focused on Florida’s Governor Ron DeSantis as he has confirmed that Florida state legislators are considering terminating Walt Disney World’s district known as Reedy Creek Improvement District.

Why the recent tension? The Walt Disney Company and the state of Florida have had opposing views on the “Parental Rights in Education” bill, also known as the “Don’t Say Gay” Bill. While Disney has said they will work to repeal the bill, Gov. DeSantis has made it clear, “They do not control this state.”

As Disney deepens its involvement in Florida politics, its district which was created back in 1967 is at risk. Disney’s Reedy Creek basically acts as its own government with two cities and land in Orange and Osceola counties. The threat is for all of this to be pulled out from under Walt Disney World Resort.

Now, Disney fandom is calling out for Disney to relocate to New York as noted in several tweets below:

Of course, there are several Disney fans also responding against the Disney relocation to New York. Not only is the argument that leaving Florida doesn’t make sense financially for the Theme Park, but logistically how the massive Park giant makes the move is questionable.

Could this debate go beyond being a social media trend into something more? Realistically it seems like it would be an almost impossible and rather expensive decision for The Walt Disney Company, but we have no idea what Disney is discussing behind closed doors.

Disney has recently added a dose of Disney to New York with a new partnership with CAMP, but by no means is this equal to a Walt Disney World Park including Magic Kingdom, EPCOT, Disney’s Hollywood Studios, or Disney’s Animal Kingdom.

We’ll be sure to share further information as Disney’s relocation to New York trends on social media.