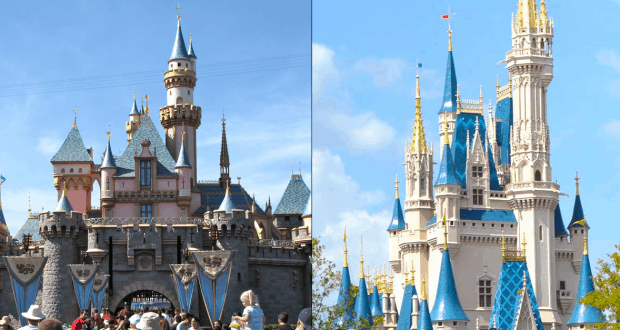 Walt Disney World vs. Disneyland Attractions: Who Does it Better?

Every Disney fan knows that the attractions at Disney theme parks are world class. Some Disney rides and attractions are so beloved that they have made their way into many of the parks worldwide. In this case, we’re going to compare some of the rides that Walt Disney World and Disneyland have in common- and which park does it better. Read on to see if your favorite ride makes the list!

Disneyland Does it Better: The Original Disney Park Wins With These Attractions!

I’m a huge fan of Big Thunder Mountain Railroad at Walt Disney World.  It might even be my favorite ride there.  However, I was immediately hooked by the extra details on the Disneyland version. The explosions in the mine shaft, for example, are something that we don’t have (yet) at Disney World.  A major refurbishment with the addition of extra effects was on the docket for Walt Disney World’s version. Sadly, many of the plans for park enhancements for the 50th Anniversary were put on the back burner when the pandemic hit.  We are unsure if we will see those changes come to fruition.  Until we see some updates, the Disneyland park attraction is the winner.

This classic Disney attraction Space Mountain is SO much fun, but the older I get, the less I want to ride this dark roller coaster at Walt Disney World.  It’s a great thrill ride, but the track is rough and I always exit the ride feeling like I’ve been beaten up.  It’s hard on my neck and back, and I’ve heard similar reports from other Space Mountain riders.   When I went to Disneyland, I had the pleasure of riding their FAR superior version of the attraction via the single rider line.  I rode it over and over, with no unpleasant side effects.  The ride at Disneyland is smooth and exciting, and the addition of a fun soundtrack in the on-ride speakers is a big bonus. I also love the Disneyland version’s side-by-side seating.

Most Disney fans will say that this choice is a no-brainer. I have a hard time with this one, though. There’s no denying that the entire exterior of the Disneyland version is far more elaborate and magical. However, I don’t actually prefer the inside of this boat ride over it’s Florida cousin. The Disneyland version has some really well-placed beloved characters in the ride, which is a cute addition. My issue is the path through the ride itself. It feels like a small flume running through a building, whereas the Walt Disney World version really feels like you are floating through the attraction, not past it on a flume.  I’m just not a fan of being able to look over the side of the flume to see the floor next to the ride. I’ll give the edge to the Disneyland attraction on this one for the impressive exterior and holiday overlay, but I do so somewhat begrudgingly.

Related: 10 Reasons Why We Love Magic Kingdom Its a Small World

Disneyland’s Pirates of the Caribbean is the sure winner here.  Extra show scenes plus the addition of a second drop make the ride longer and more fun. I would never skip this popular ride at Walt Disney World, but the original ride at Disneyland does it better. I also love the parrot in the queue, and the fact that the ride briefly sails through the Blue Bayou restaurant in Disneyland.

Buzz Lightyear’s Space Ranger Spin at Disneyland wins the park battle by a landslide. The blaster is not attached to the ride vehicle on the Disneyland ride.  The ability to lift the blaster to truly control your aim is life-changing. Forgive the slight exaggeration here, but the ride is so much more fun when you are able to really control where you shoot. I also love that there are different shaped targets to hit on the Disneyland version. It’s great to feel more in control of your score- a stark contrast from the haphazard controls you have to deal with on the Walt Disney World version.

Related: 8 Reasons Why You Need to Plan a Disneyland Trip Now

I am a big chicken and do not like the Disneyland version because of the seating.  In Disneyland, each rider has his or her own row.  A parent and child can usually sit side by side in the back row.  Since I’m inherently terrified of this ride, I like to be to be squished in nice and tight.  Splash Mountain in the Magic Kingdom is also a bit longer and has newer animatronics, too, so I give the Walt Disney World version the edge.

The Haunted Mansion is similar in both parks, but Walt Disney World’s version is longer and has more interesting elements.  Disneyland’s Haunted Mansion holiday is impressive, though, especially if you’re a Nightmare Before Christmas fan.  I love the holiday overlay, but I think that Disney World’s version is a little better, both inside and out. The mansions have different exteriors and live in different lands, so the theming may impact which one you prefer.

I’d love to give a big “no thank you” vote to both of these rides, because they scare the daylights out of me.  If I had to choose the better option, I think the Magic Kingdom park version is superior. The ride is elevated over Tomorrowland, giving you some amazing views.

This ride is basically the same in both parks, but it feels a lot more immersive at Walt Disney World simply because of how amazing Toy Story Land is. It doesn’t hurt that the indoor queue at Disney World is so much fun to explore. The vibe of Pixar Pier at Disney’s California Adventure is special, too, but nothing beats the themeing for the Orlando version.

I prefer the Adventureland area at Disneyland, but the Jungle Cruise itself is quite similar in both parks.  Disneyland’s version is missing the temple section, however, so I’ll give the slight edge to Walt Disney World. I also thing this is a case where Disney World wins out due, in part, to it’s more elaborate and fun queues.

Too Close to Call

There are still far more attractions that exist in both parks, but most of these are too similar to have a clear favorite.

The classic Fantasyland dark ride Peter Pan’s Flight is similar in both parks, but the queue is far superior at Walt Disney World.  Soarin’ at Disney’s California Adventure park s very similar at both parks. Mad Tea Party differs only in it’s exterior (covered vs. uncovered) and Dumbo the Flying Elephant is basically the same, although the play area at Walt Disney World is pretty incredible. Other similar attractions include The Little Mermaid: Ariel’s Undersea Adventure and Under the Sea: Voyage of the Little Mermaid, Autopia and Tomorrowland Speedway, the Many Adventures of Winnie the Pooh, and the virtual ride through space, Star Tours.

Related: Disneyland vs. Disney World – A Comparison of These Two Spectacular Resorts

Have you tried these attractions in both resorts? We’d love to know if you agree or disagree with our winners!