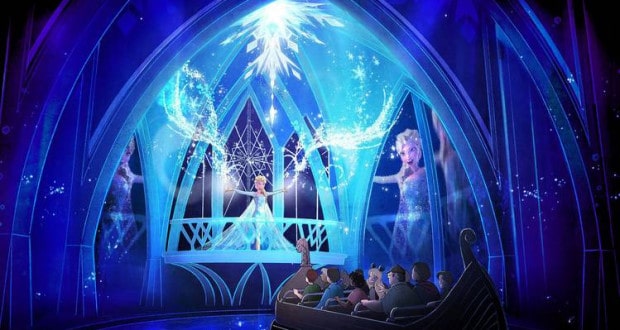 Walt Disney World’s Newest Ride Will Be … “Frozen Ever After”

As reported by mynews13.com and the Wall Street Journal

We can now get a first look at Walt Disney World’s soon to be built ride “Frozen Ever After”.

This ride will be will be located in the Norway pavilion at Epcot was published late Monday in a Wall Street Journal exclusive, revealing a snow-filled boat ride scene starring Elsa in her ice palace singing what could only be “Let It Go.” Full WSJ article: How Disney Milks Its Hits for Profits Ever After

The article’s main focus is on Disney’s current trend of backing its big-name franchises, including the Disney-owned Marvel and Star Wars properties, and of course, the smash hit “Frozen,” which quickly rose to become the highest grossing animated film of all time.

But for theme park fans and tourism leaders in Central Florida, the bigger news is the unveiling of the Frozen ride, which the Wall Street Journal reports will be named “Frozen Ever After.”

Here are some other new tidbits of information on the ride we’ve learned from Monday’s article:

An exclusive look by the Wall Street Journal blog Speakeasy revealed even more new details on the ride Tuesday morning:

The new ride is slated to open sometime in 2016. Some reports are stating an opening date of May 1st, 2016