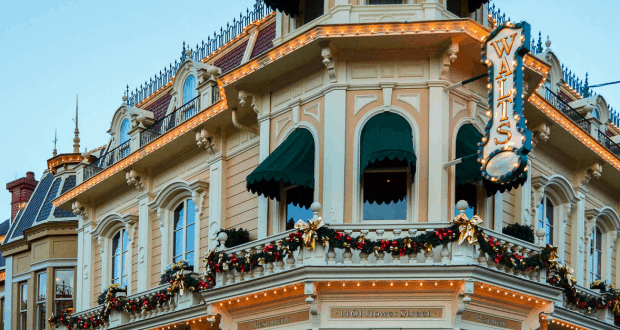 Quoting from his Blog:

“I’ve learned of a couple of new venues that are planned for the (currently) very dusty Disney Springs project. One will be a restaurant called Walt’s — not sure where they came up with that name — and another will be a bar and lounge known as the Neverland Tunnels.

Details are still a little sketchy, but both will be located near the previously announce Edison, which will be set up as a speakeasy. Neverland Tunnels will make use of the space that once sat beneath the Adventurers Club at Pleasure Island.”

The Neverland tunnels are rumored to be adult only and the Neverland Tunnels will be located below the former Adventurers Club location. It will reportedly be accessible only through The Edison and “Walt’s”

Disneyland Paris does have a restaurant called Walt’s.  According to the official Disneyland Paris site Walt’s Serves sophisticated and contemporary American cuisine, this is a Victorian-style tribute to the life and work of Walt Disney.

At Walt’s you can Dine amongst a timeless backdrop of Walt’s finest moments in rooms themed to reflect the six worlds of Disneyland® Park. Enter the grand lobby and make your way to the first floor. As you ascend the steps, framed images of Walt’s work take you on a journey from the creation of Mickey Mouse to the release of Snow White and the Seven Dwarfs. Once seated, you can tuck into delicious American meals and admire the setting of your chosen room.

In Disneyland Paris, The themed rooms of Walt’s are:

Please tell us what you think in the comments below or on Facebook.