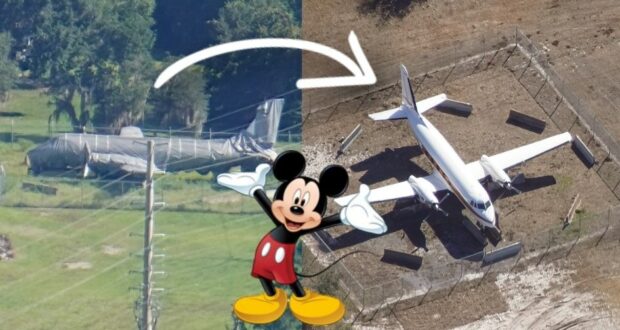 Walt’s plane is making a comeback… well, sort of! We previously shared the news that Walt Disney’s Grumman Gulfstream I airplane will be available as a new exhibit at the upcoming D23 Expo in Anaheim, California. A recent photo shows that Walt’s plane hasn’t left the Walt Disney World Resort just yet… but it looks like it has had a much-needed bath.

Of course, to be part of the massive Disney fan expo means the plane will need to leave its current location near Walt Disney World’s Animal Kingdom Theme Park, and make the trip across the country from Central Florida to California.

With the 2022 D23 Expo being held in September, Disney still has a little time to move the plane from one location to the next to complete the restoration of the plane and have it ready to be on display for this year’s D23 Expo Guests. The new exhibit will be called “Mickey Mouse One: Walt’s Plane” with the short teaser revealed below:

RELATED: Why Doesn’t Walt Disney World Build Its Own Airport?

We will say that it looks like Walt’s plane has received a nice bath and is cleaned up in preparation for the big move. @bioreconstruct shared a photo on January 30, 2022, of Walt’s plane still located at Walt Disney World Resort noted with, “Aerial photo of the plane Walt Disney flew in to survey land bought to build Walt Disney World. As seen today. In storage North of Animal Kingdom.”

RELATED: What Happened to Everything “Coming Soon” from Past D23 Events?

Looking good! Here was the before photo:

It looks like Disney is making strides to clean up Walt’s plane which is sure to be a Disney fan favorite at this year’s D23 Expo. We’ll post photos and videos of the exhibit as we attend this year’s expo!