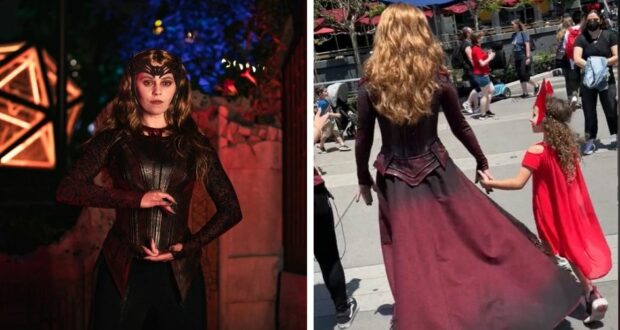 The fan-favorite Marvel character (and show-stopping character in the newest Marvel movie Doctor Strange in the Multiverse of Madness) Wanda Maximoff has been the talk of the town since she took up residence in Disneyland California Adventure. However, be careful if you’re bringing your kids to Disneyland Resort; apparently, Wanda Maximoff (aka the Scarlet Witch) might temporarily take them for herself!

The Scarlet Witch character (who is played in the Marvel Cinematic Universe by actress Elizabeth Olsen) is known for her eye-catching superhero costume (including a red wimple or headpiece) and the distinct hand movements that she adopts while casting spells. The Cast Member portraying the Scarlet Witch and Wanda Maximoff in videos from Disneyland Guests (shown below) is clearly sticking to her character’s style — but she’s also incorporating one major plot point from Wanda’s storyline!

The Marvel show WandaVision (which featured Wanda and her husband Vision, played by Paul Bettany) ended with Wanda losing both her husband and her two boys. Doctor Strange in the Multiverse of Madness, therefore, begins with a grieving Wanda who is longing for her children — so it’s not surprising to see the Scarlet Witch taking a young Disney Guest by the hand and walking away with them in the Tik Tok video above!

Many Disneyland Guests like that Marvel characters stroll around the Avengers Campus in Disney California Adventure, and we can see the Scarlet Witch on the move in an Instagram video below as well.

Apparently, you’ll want to hold onto your children if Wanda is around! Are you heading to the Avengers Campus in Disneyland Resort’s Disney California Adventure to see the Scarlet Witch and other Marvel characters, even if Wanda Maximoff (i.e. the Scarlet Witch) does have a tendency to wander away with children who aren’t hers in an attempt to replace her two lost sons?