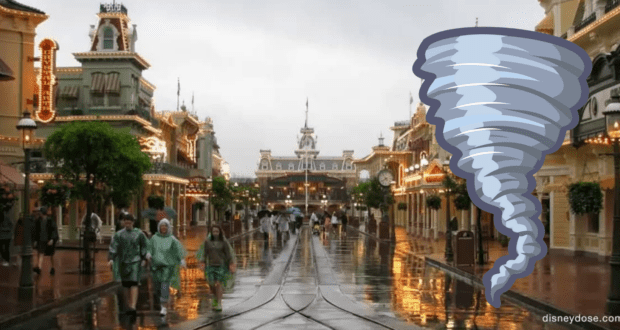 What Happens When a Tornado Hits Walt Disney World?

Extreme weather certainly is not a magical part of a Walt Disney World vacation, but if it does happen during your trip, you can breathe a sigh of relief knowing Disney has plans in place for both Guest and Cast Member safety. Tornados can be especially unsettling as they can hit suddenly and of course require a specific protocol to stay safe. Here are the steps Disney will take if a tornado is coming toward the theme parks and resorts. 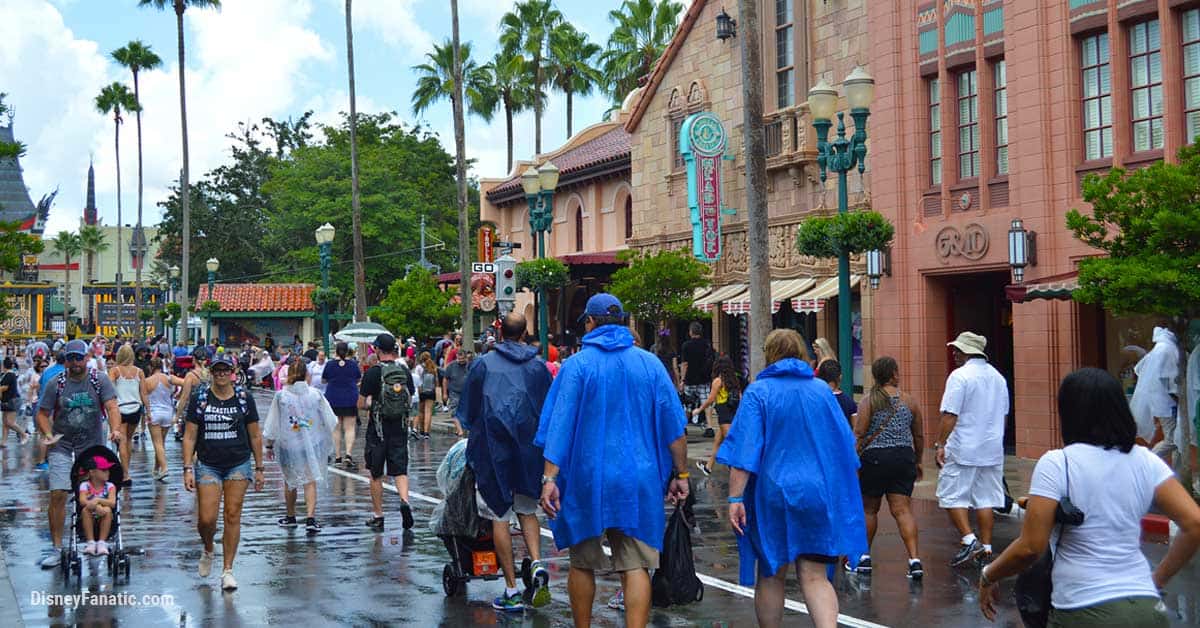 Whether a tornado watch, hurricane warning, chance of high wind or downpours, or any other kind of extreme weather, Disney is keeping an eye on the radar behind the scenes. Disney tracking the weather is not obvious to Guests, but you may spot this in action when an outdoor attraction closes seemingly before the extreme weather hits.

While many attractions would continue to operate with normal levels of rain, high winds pose an increased danger, so if high winds are coming within a certain distance to Walt Disney World on the radar, certain areas of the parks will shut down. The same protocol would take place if there is a chance of a tornado. Even if the tornado does not hit the parks themselves, if there are high enough winds, outdoor attractions will shut down and Guests could be directed to indoor areas.

Disney’s behind-the-scenes weather tracking can also give Cast Members some advance notice to start closing down outdoor shops and food kiosks, and to start getting their rain gear on! 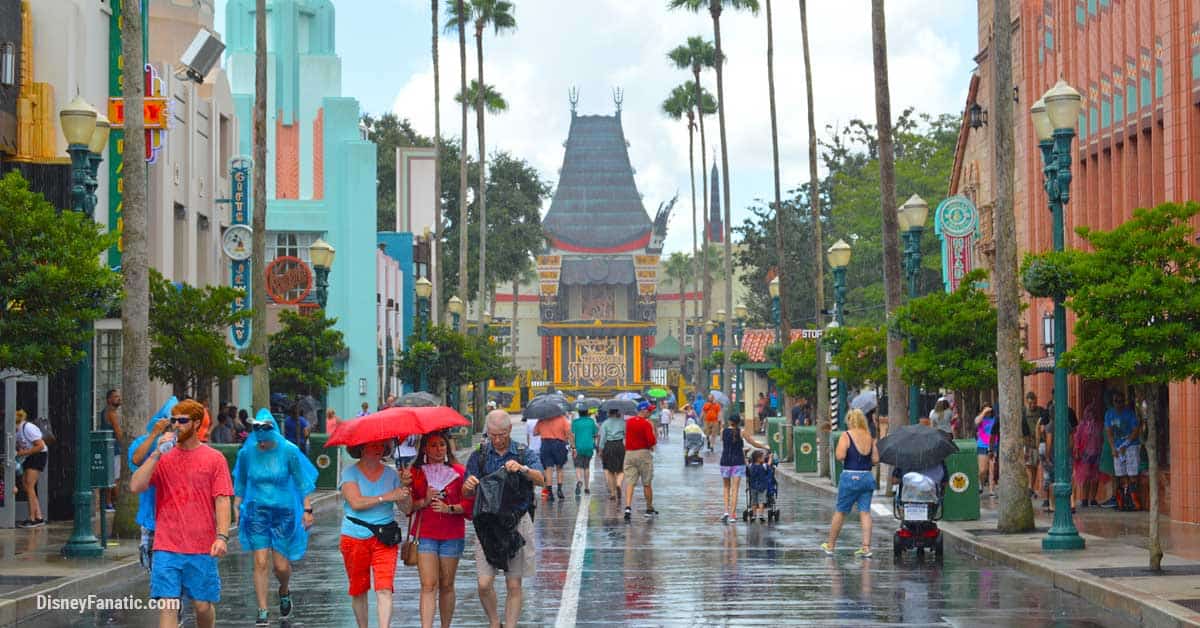 There are multiple levels to evacuation protocols in place to keep Guests safe. If you see that a tornado watch is in effect or that a hurricane is nearing Orlando and you are surprised to see that the parks are still open- Don’t worry. Disney’s tracking will help dictate when an evacuation or shelter situation is necessary and Cast Members will be on hand to help. In the case of a serious hurricane or tornado, you may see parks close in advance (the water parks will be the first to go), but if the parks are open, there are ways for you to stay safe.

If the weather will pass in a short amount of time, Guests might be instructed to take shelter. Any type of evacuation protocol around Walt Disney World varies by location, so depending on where you are, taking shelter could mean going under cover of an outdoor area to avoid heavy rainfall (as in a covered theater situation like Indiana Jones Epic Stunt Spectacular at Disney’s Hollywood Studios for instance) or if could mean heading indoors (meaning if you are in say, Fantasyland in the Magic Kingdom, you could be directed inside the queue of Mickey’s PhilharMagic or Princess Fairytale Hall.) 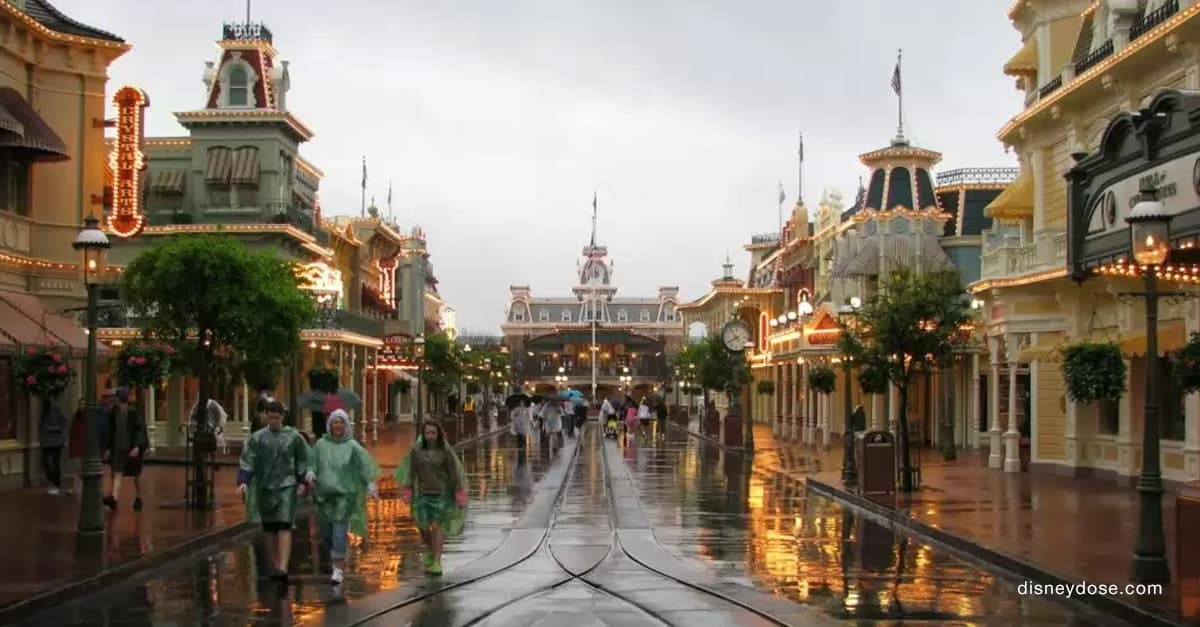 While extreme weather does hit Walt Disney World, typically in the form of high winds and heavy rains, an evacuation is very unlikely. Disney’s weather tracking would normally close off areas of the parks (or whole parks) before dangerous weather hits. Still, some extreme weather is less predictable and evacuations can happen, especially in the case of a tornado in proximity.

All evacuations from the theme parks depend on the severity and type of extreme weather. For a tornado, you are probably aware that the safest place to be is in a basement and away from windows. If you are at a Walt Disney World Resort hotel and a tornado hits, you would be instructed to the lowest level of the resort.

In the theme parks, a tornado evacuation will entirely depend on which area of the parks you are in. Disney trains Cast Members on evacuation procedures by breaking the process up into A, B, and C plans, with A being the least serious situation. Each plan varies by the area of the parks, so a Plan A evacuation could mean simply walking out of the entrance of the park, while Plan B could take Guests out via backstage areas that could help them exit an area quicker, while Plan C could move everyone backstage (into the Utilidors depending on the circumstances in the Magic Kingdom).

What do you need to know if the weather impacts your trip?

Before you go, check your travel plans for insurance or other protocols you should know for things like flight cancellations. Once at Walt Disney World, Cast Members will help keep everyone safe in the event of extreme weather. Be sure to follow all Cast Member instructions (during extreme weather situations and otherwise) as they are in place for your safety.

You may also want to pack some extra clothes, snacks, and any medications you might need while traveling in case your travels home are delayed. In the cases of hurricanes and tornados, flight cancellations are a real possibility, and if your travels home from Walt Disney World are delayed, or you end up staying longer than you planned in your hotel room, you will have everything you need!

Disney is also helpful when working with Guests who need to change their travel plans due to weather impacts, so if you are feeling unsure of traveling during extreme weather, contact Disney directly to see what alternatives are available.