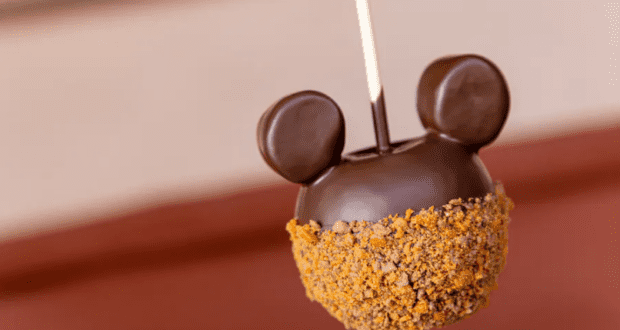 If you consider Disney World to be the apple of your eye, as far as vacationing goes, you’re not alone. And if you are particularly fond of that sweet, juicy fruit referenced by that noted saying and just happen to be at Walt Disney World Resort at the moment, then you’re right where you need to be.

Not only are you in the heart of Disney magic, but you also get to enjoy several scrumptious apple-based enticements worth sinking your teeth into. From pies to cakes, drinks to other specialties, here are 11 appealing apple treats you just have to try at Walt Disney World Resort.

These are among the most contested confections all throughout Walt Disney World Resort. You’ll find countless combinations in the way of toppings and flavors, not to mention unique theming. Throughout the various Parks, locations within Disney Springs, and even some Resort hotels offering their own exclusives, you can go crazy with the multitude of unique candy apple options.

Pickings are plentiful but some of the vast varieties awaiting you can be found at Magic Kingdom Park’s Main Street Confectionery and at two noted Disney Springs staples: Goofy’s Candy Company and Disney’s Candy Cauldron.

Here’s a refreshing concoction that adults and kiddos alike can sip with satisfaction. This signature beverage, proudly served up at Gaston’s Tavern at Magic Kingdom Park, features frozen apple juice mixed with hints of toasted marshmallow and topped off with an all-natural passion fruit-mango foam. It can be ordered as is or served up in a souvenir stein.

Related: Eight Exceptional Places at Walt Disney World Where You Can Seek Out Specialty Doughnuts

Another cool-to-the-core apple-based concoction is this sweet treat, dished up over at Geyser Point Bar & Grill on the grounds of Disney’s Wilderness Lodge. An entirely plant-based offering, this icy epitome of frozen desserts comes served up with fresh berries.

Related: Try Out This Mickey-Inspired Conchas Recipe From D23

Nothing beats the classics, unless it’s the very best version of a traditional classic. And that’s certainly the case with the Granny Smith Apple Pie being dished out over at Whispering Canyon Café, also at Disney’s Wilderness Lodge. As the name entails, granny smith apples are incorporated into the overall boastful baked presentation, which comes served up à la mode with cool, creamy ice cream.

One is the very straightforward Traditional Warm Apple Crisp, which is entirely plant-based. Then, there is the secondary option to get the aforementioned offered à la mode, with a refreshing, creamy accompaniment of ice cream.

Related: These Are the Most Entertaining Non-Character Dining Experiences to Have at Walt Disney World Resort

Because breakfast is the most important meal of the day, this may well be the most important apple starter recommendation we have for you. Proudly served up over at the Yacht Club’s well-loved Ale & Compass Restaurant, to say that this tantalizing French toast specialty is delicious would be the ultimate understatement. A more accurate description would be to call it dessert for breakfast.

That isn’t the only appealing apple pick being served up here, though. Cocktail-craving dinner Guests can find indulgence with their Big Apple Cocktail, which comes as a tangy blend of Buffalo Trace Bourbon, crisp apple purée, and Carpano Antica Sweet Vermouth.

Diners at the Magic Kingdom’s famed Liberty Tree Tavern know that they offer a bountiful feast of traditional culinary classics that scream Americana. As an alternative to their all-you-can-eat Bill of Fare family-style menu, there’s a special Plant-based Tavern Keeper’s Feast, which keeps the offerings entirely vegan.

And their featured dessert course for the latter includes their rightfully named Johnny Appleseed’s Warm Apple Cake. As the name implies, it comes served up decadent and warm, accompanied by caramel, and garnished by whipped topping.

Related: Most Mouthwatering Meat-Free Meals to Have at Walt Disney World Parks

This budding favorite can rightfully be found within the fine-dining dessert listings on the menu at the Grand Floridan’s famed Citricos restaurant. Served up warm, this decadent display flourishes with seasonal apple selections compiled with marzipan, raspberry jam, and frozen coconut milk.

Kringla Bakeri og Café, over in EPCOT’s Norway Pavilion, is known for an array of mouthwatering morsels. And keeping things especially apple is their own rendition of a Norwegian apple cake. Good to the core in traditional fashion, this “eplekake” garnishes off the delicious presentation by showcasing caramel drizzled on top.

Some of these highly hailed highlights include:

For those who have experienced Storybook Dining at Artist Point with Snow White, onsite at Disney’s Wilderness Lodge, you know that this is a one-of-a-kind elevated experience on several accounts. From being in the presence of the first-ever Disney Princess to enjoying exceptional cuisine in a serene setting, it’s the ultimate transcendence into a fairytale via mealtime.

And because our favorite heroine is such a fan of apples (albeit the poisoned variety) there’s even an exquisite apple-themed dessert here that’s simply “to die for.” Rightfully named the “Poison” Apple, this sweet treat comes as a chocolate-apple mousse with a sour center, made up to look like glistening confectionary red apples. You just won’t be able to resist!

If you still haven’t gotten your fill of these delicious apple-based picks, you should know that many others await you all throughout Walt Disney World Resort locations (and within Disney Springs) as well. Some other appetizing honorary mentions include salads featuring real apple slices, on-the-go slices or whole-fruit selections, and even available hard ciders.

So, whether you’re craving something sweet and savory or cool, crisp, and as-is, the many ways in which Disney does up apples is appealing each and every time.