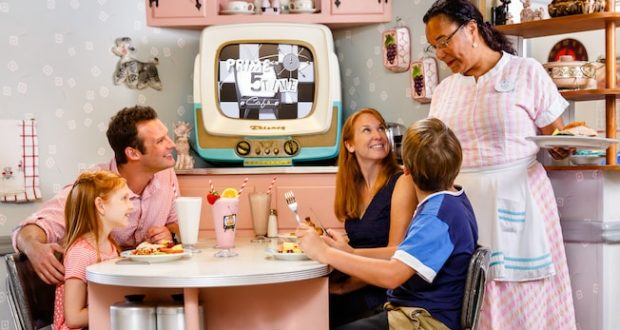 Anyone who is familiar with the dining scene throughout Walt Disney World Resort knows well that Disney has set an impeccable precedent for itself in just about every known category that qualifies for what is considered enjoyable eating. Aside from the high-quality taste delivered through an enticing array of phenomenal fare offerings, one of Disney’s greatest strengths (as far as dining goes) rests in the fact that every single venue is adamantly committed to creativity, as characterized through their themed settings.

This carries over in both the venues’ décor and motif, along with any active onsite portrayals of Disney characters. And while character meals have been the hailed hallmark to strive for in regards to Disney’s most treasured dining experiences, there are plenty of other entertaining options out there that are totally independent of the need to recruit costumed characters. From in-house restaurant effects to experiences that transport you to a specific time or story plot, these are the most entertaining restaurant experiences to have around Walt Disney World Resort.

12. Top of the World with a Side of Fireworks

California Grill, over at Disney’s Contemporary Resort, has been raising the roof on the dining scene at Walt Disney World for several years now. Located on the Resort’s 15th-floor zenith, dining here comes with stellar top-of-the-world panoramic views of the surrounding Seven Seas Lagoon, Cinderella Castle, and other nearby geographic wonders. And while the bustling onstage kitchen provides a most entertaining showcase of meals and morsels coming together to the delight of diners, it is the nightly fireworks spectacular (as experienced by fortunate Guests present for the occasion) that ranks supreme.

Just as the event begins, the lights within the restaurant dim, as the accompanying music fills the scene. But it is the closeness of the fireworks that creates the grandest spectacle of all. It’s also worth noting that Guests who are not able to dine precisely during the time of the fireworks spectacular are able to return to the restaurant and its outdoor viewing areas if they so choose, by providing proof of their dining reservation or receipt.

Several dining locations throughout Walt Disney World Resort have been known to require elaborate method acting from their Cast Members, since the Cast Members are playing along with a venue’s established motif. The 50’s Prime Time Café in Hollywood Studios is one of the most well-known restaurants for staying true to the plot at hand; its inside décor, vinyl seating, and accompanying retro televisions are just the beginning!

The classic comfort foods provide the added touches to pave the way to the ultimate trip down Memory Lane. But it is perhaps the actions and attitudes of the wait staff specifically that characterize the dining scene so uniquely. From having you mind your manners, to scolding you when they deem it necessary, it can be a truly fun time for those who enjoy rule-breaking just to be repaid with some good-humored banter. But do take note that it can also be extremely annoying for others.

Dining at Whispering Canyon Café, over at Disney’s Wilderness Lodge, is another themed mealtime with an acting component. But don’t feel that you must tip-toe around and be as silent as a mouse. Such actions definitely do not speak louder than the hollering vocals of the Disney Cast Members here, who are famous for sassing Guests with banter. Because this venue is inspired by the rowdiness of the Wild West, don’t expect to ever have a quiet meal here despite the venue’s deliberate misnomer name. Dining here truly is a heavily divided love or hate kind of deal. If you don’t mind being messed with then it could be a lot of fun, but if you’re not one who wants attention to be drawn to yourself by making even a simple request for ketchup, then you may want to forgo this experience entirely.

Ever since the Beauty and the Beast-themed Be Our Guest Restaurant first opened at Disney’s Magic Kingdom Park several years ago, it’s become one of the most sought-after dining venues for anyone looking for stellar “Guest” treatment. While the mouthwatering prix fixe presentation of scrumptious French-inspired selections speaks volumes about its uniqueness, the in-house “special effects” of sorts as well as the surrounding elaborate décor—taken straight out of the Beauty and the Beast story—stand in regal relevance to its charm. Diners find themselves seated in one of three one-of-a-kind themed dining rooms, all with something elaborately special to boast about.

First, there’s the Grand Ballroom, laden with dazzling chandeliers, Gothic-style arches, a domed ceiling, and the effectual presentation of snow falling outside. Then there’s the Castle Gallery, complete with a rose-decorated chandelier and hallmark seven-foot-tall rotating music box featuring Belle and the Beast. The third option brings you to the elusive West Wing—the Beast’s ultimate off-limits domain, which includes the highlighted marker of that one and only enchanted rose set against a backdrop of damaged remnants, reflective of the Beast’s former destruction.

Related: 9 Things You’ll Love About Disney’s Be Our Guest Restaurant

Since opening at the end of last year on location within EPCOT’s Future World, Disney’s Space 220 Restaurant has sky-rocketed to star-studded fame, vastly becoming the next big “out-of-this-world” experience. Everything from its elevator transport to the “space-grown” greens served up onsite here makes mealtime a most remarkable undertaking. And the stunning aerial views of outer space serve to accent the time Guests spend here even further.

While we’ve been striving to omit the inclusion of character dining establishments, the classic family-style venue we know well as The Garden Grill Restaurant, housed within EPCOT’s Land Pavilion, has many more unique in-house features to showcase independent of the character component. Two of its top highlighted specialties, aside from the obvious, include its cuisine novelties and its rotational loop/interaction with a popular EPCOT attraction. To elaborate on the first point of interest, the featured garden greens as presented in the meal offerings here come from in-house and are grown onsite in EPCOT greenhouses specifically. The second point of interest is that the restaurant slowly spins on a 360-degree rotational circle, allowing diners to take in changing panoramic views and scenery as seen at the topmost portions of the Living with the Land attraction that runs below.

Related: 7 Things We Love About the Garden Grill

6. The Road to Irish Enticements

There are plenty of live entertainment venues throughout Disney Springs. And while some are solely performing arts presentations, others combine palatable pleasantries with onsite engagements to enjoy as you eat. One of the best examples for the latter is none other than the famed Raglan Road Restaurant. Not only can you get lost in the lucky luxuries of conventional cuisine classics direct from the Emerald Isle, but you get to enjoy a host of toe-tapping music and dance performances at various times throughout the day as well.

5. Dinner and a Drive-In Movie

Those with fond recollections of old drive-in movies as well as younger generations unfamiliar with such offerings will love the atmosphere at Sci-Fi Dine-In Theater Restaurant. Another fun-themed dining experience at Hollywood Studios, you get to enjoy great American classics here while dining in an environment designed to mimic an evening night sky at a drive-in outdoor movie theater. Most table and chair setups are even modeled after actual cars with headlights and all. And the great big movie screen, replaying campy horror film trailers on a loop, adds largely to the effect of transporting Guests to the established motif that’s on replay.

4. Dinner and a Movie In-House

For a very different “dinner and a movie” undertaking, just head on over to AMC DINE-IN Disney Springs 24. While enjoying a movie in the traditional way with candy and corny concessions paired with a soft drink is all fine and dandy, their meal-pairing option elevates the eating experience to the grand scale of restaurant status.

Select theaters allow you to order off of their full menu, which includes hand-crafted appetizers, entrées, and even desserts to make the ending a happy one (no matter which film you are watching). Then, have your meal delivered straight to your seat, in coordination with your viewing pleasure. It just doesn’t get any better than that.

Trader Sam’s Grog Grotto, on location at Disney’s Polynesian Village Resort, features a ‘lite bite’ menu in addition to a host of elaborate drink concoctions. And while the décor and motif throughout provide plenty for the eyes to feast on, it’s the in-house special effects (which occur in conjunction with ordering from their collective array of specialty drinks) that really sets this establishment apart.

Order the Krakatoa Punch, for example, and you’ll set off a volcanic eruption! Requesting Mosquito Mojito apparently attracts mosquitos, as you will hear their noise and see the on-duty skipper take off around the establishment, fly-swatter in hand. Asking for the Zombie Head will cause the room to go dark, setting the surrounding shrunken heads aglow and causing the skippers to imitate ghosts with spirit rods. The effects are seemingly endless, making your time here a most exciting and interactive must-do.

2. An Untamed, Wild Side to Dining

While the popular restaurant chain exists elsewhere outside of Disney, Walt Disney World in particular boasts two awesome locations for Rainforest Café. One can be found right on the heels of Disney’s Animal Kingdom Park while the other joins the long line of other uniquely themed restaurant hits on the Disney Springs scene. From large animatronic animals to intervals of in-house storms, the interactive effects happening here combine perfectly to make dining here an engaging, all-age delight on so many different levels.

Related: This Rainforest Café Has A Ride & Now We Want One At Disney!

Another elaborate special effects-themed dining venue onsite at Disney Springs is T-REX Café. Quadrupling as a dining spot, interactive dig-site, gift shop, and great place to build your own dinosaur creation, this optimal option gets our ultimate seal of approval on countless levels. While many classic eats are featured on the menu, creative naming and a couple of novel dessert concoctions of epic proportions seal the status here on a strictly dining level. But combine that with the collaborative in-house dinosaur and large insect animatronics, not to mention the interval occurrences of meteor showers, and you have a truly unique presentation like no other. It’s just about the most lively location featuring a now-extinct compilation cast that you could find.

Disney’s dining scene includes several other elaborate themed happenings, including such events as Fireworks Dessert Parties, tasting events, seasonal limited-time engagements, and many others. In the past there have also been a host of unique dinner shows to take note of; however these all remain temporarily closed for the present time. Whichever ways you choose to dine while at Disney, know that each venue offers up its own versatile uniqueness in quality that fuses together tastes as well as engaging experiences tailored specifically to the delight of Guests.