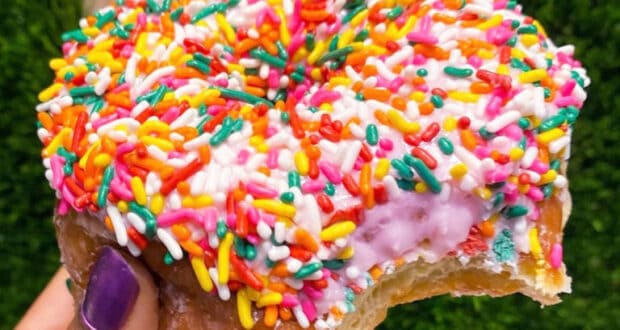 November 5th is one of two National Doughnut Days in the United States; the other one takes place on the first Friday in the month of June. This means that the celebration of these delectable doughy dessert favorites are doubly delightful to indulge in. And since Disney takes the cake (or in this case, doughnut) for being the “Happiest Place on Earth,” it only makes sense that you would be able to find such contested morsels at a place that’s known historically for making people of all ages smile. From specialty bakeries to house-exclusive dessert offerings at some of your favorite restaurants, we’re singling out eight exceptional places around Walt Disney World where you can seek out specialty doughnuts.

This particular kiosk, on location at Disney’s Blizzard Beach Water Park, is renowned for its highly favored donut flavors of all kinds. While small in stature, these mini mouthwatering medleys all pack a robust taste so overpowering that they easily make up for their size. But this isn’t the only Joffrey’s Coffee & Tea Company kiosk known for serving up a slew of these miniature morsels. Disney World Parks, along with the Disney Springs location, proudly dish up doughnuts in variety packs of four, ranging in flavors taken from the following:

While Disney’s BoardWalk Bakery has plenty to boast about in the way of baked goodies varying in all types, there is one decadent doughnut offering on the menu that continues to be a hit with fans time and time again. It’s none other than that renowned Brioche Boston Cream Doughnut you may have already heard about. If not, well then it’s pretty self-explanatory—it is a large, brioche bread cream-filled doughnut with that classic chocolate coating, so characteristic of traditional Boston Cream Pies.

Related: Celebrate the Holidays with Seasonal Eats at Disney’s BoardWalk

While not a permanent fixture over at EPCOT, Brew Wing is the current food booth being presented at the former Odyssey restaurant as part of this year’s International Food And Wine Festival. While guests can find a vast array of exciting eats available on the menu, it’s their EARidescent Croissant Donut offering that’s captured our attention. To honor the ongoing 50th Anniversary Celebrations taking place across Disney World, this shimmering presentation comes as a croissant-doughnut combo (commonly dubbed a “cronut”) iced over with beautiful blue frosting and glittering sprinkles.

This table service restaurant over at Disney’s Hollywood Studios packs plenty of menu items that are straight out of science fiction fantasy. That’s why it’s easy to think their Warm Glazed Doughnut dessert feature is just too good to be true. More of an ice cream novelty than a traditional, standard doughnut, this decadent dish delivers up a warm-glazed doughnut paired with apples, cinnamon, and a crowning adornment of vanilla bean ice cream with caramel sauce.

You may recognize STK Orlando as that chic signature steakhouse located right in the heart of Disney Springs. And while refined plated specialties of seafood classics, steak, and other land-based fare obviously hold places of honor on the restaurant’s menu, you may do a double take when you see one such offering in the dessert section. It’s listed simply as their Bag O’ Donuts. But these doughnuts aren’t simple, as they come to you rolled out in cinnamon sugar and accompanied by three varieties of dipping sauce—spiced chocolate, raspberry, and dulce de leche.

It may surprise you to learn that you’ll find a vast range of different doughnut ensembles being featured on the menu in the renowned haunt over at Disney Springs. While in their most basic form they are referred to as House-made Doughnuts, there’s nothing basic about their taste or the various ways in which they are served up. First things first, these are mini sugar doughnuts that pack a soulful, simplistic goodness. Enjoying them as is would be just fine, but some of the featured ways in which to gorge on them include ordering the Fried Chicken & Doughnuts platter for lunch or dinner, or as the brunch special in which they are served two ways—they can be spruced up with pecans, bacon, and caramel drizzle or dusted with sugar, spiced cane syrup, and accompanied by seasonal fruit.

Related: Chef Art Smith’s Homecomin’ Has Donuts & We Can’t Get Enough of Them

Want to know where to get some delectable doughnuts even if you’re following a specialty diet? Just head on over to Erin McKenna’s Bakery NYC over in Disney Springs where they specialize in baked goods and desserts that are gluten free, vegan, kosher, and extremely delicious! While flavors may vary on a daily basis, some of the scrumptious doughnuts you’ll find here include: Salted Caramel, Chocolate Dip, Vanilla Sprinkle, Samoa, Powdered Blueberry, and plenty of others. Keep an eye out for seasonal flavors and specialties as well.

At last! Here is your ultimate go-to for doughnut fixings of a most varied assortment. But with “donuts” in its name, that’s obviously what you expect to find here, right? And boy does Everglazed deliver on doughnuts galore! They offer so many variations, in fact, that we would be hard-pressed to name even the vast extent of what they have listed here. All the same, we’re presenting some of their most unique specialties worth noting:

Are you craving some delectable doughnuts right about now? “Doughnut” let us stop you, especially if you happen to currently be at Disney right now, where you can get some of these enticing featured favorites immediately. Doughnuts and Disney pair so perfectly together, making each one’s singular experience even more magical when combined.