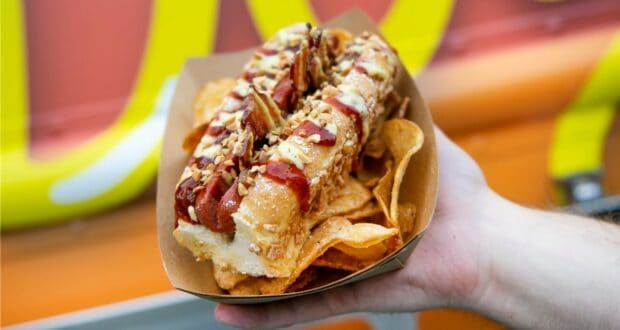 Have you ever tasted something at Disney World that was altogether gross? Or perhaps it wasn’t the taste that was so bad but rather the “gross price” for what you paid for it. Either way, we’ve all learned one way or another that not all Disney tastes live up to the epitome of greatness Walt Disney World Resort is supposed to be known for. From overrated treats that are nothing special to controversial choices that leave a vast majority of guests with a bad taste in their mouths, here are some of the worst snack foods we’ve come across at Walt Disney World.

Yes, you’re at Walt Disney World Resort, and some snacks are indeed a rite of passage. Consider those iconic Mickey Mouse ice cream bars, for instance. Okay, so they are definitely worth the extra cost. But what about all the other redundant, underwhelming snacks that fall short of any impressive flavor or taste? We’re talking about those of largely mundane and mediocre quality with fan appeal exclusively hinged on the fact that they take to a Disney character theme and nothing more. Prepackaged cookies, pretzels, rice cereal treats, and other snack items may make great souvenirs to remember your trip by or to bring home and share with some “poor unfortunate soul” who couldn’t make the trip to Disney World, but are they really worth the extra cost as an in-the-park snack? We’ll let you decide. Even several onsite bakery goods, like themed cupcakes, fall short of being anything exceptional (though still delicious by all accounts). We’re not here to bash personal tastes or discourage you from buying themed confections altogether. We just want you to keep in mind that many Disney-themed goods are nothing exceptional in regards to taste.

These Star Wars-themed concoctions are at the center of a reception that you will either love or hate, with a slightly larger majority of tasters arriving at the latter conclusion. From each one’s unique flavor to those attention-grabbing colors, these drinks are unusual in everyway, but that’s part of their primary appeal for why guests continue to seek them out. Neither one is actually milk, if that’s what you’re expecting. Rather they are plant-based, non-dairy blends of rice and coconut milk that incorporate each color’s signature mix of flavors. For instance, Blue Milk is a mix of sweeter fruits like dragon fruit, watermelon, lime, and pineapple while Green Milk is a more citrusy craft of mandarin orange, orange blossom, grapefruit, and passion fruit. These are definitely not for everyone. And at $7.99 for a regular serving or a more spirited specialty feature priced at $14.00, it’s up to you to decide if they are even worth it.

For many, the infamous Walt Disney World Turkey Leg is an absolute must-try item, and fortunately for them, there are plenty of locations within the various parks and at nearby Disney Springs where you can get them. But you must ask yourself if the appeal outweighs the risks that come with indulging in this overly gluttonous and overpriced option. To start, just one turkey leg alone exceeds half the average daily calorie allowance. And with 5,000 mg of sodium a serving, we hope you plan to wash it all down with plenty of water and nothing else. But let’s get real, you’re at Disney, and you most likely want to try other yummy treats along the way as well. Perhaps you even have plans to take in a hearty and delicious meal later on in the day. So do you really want that $12.00 turkey leg in addition to all that? If you’re going to splurge on an unhealthy binge at least opt for something far more worth it, like a shareable Kitchen Sink Sundae!

It’s true that counter service pizza options are convenient and comparably more reasonable in pricing, as far as quick bites go at Disney. But do take note that not all Disney World pizzas are created equal. In fact, an overwhelming majority of guests have concluded that almost all counter service locations that feature pizza by the slice come up short in delivering on both quality and taste. This includes quick service counter options at the various resorts, parks, and even in Disney Springs. Of course, there are some places that specialize in and present fabulous pizza options—Via Napoli in EPCOT’s Italy Pavilion being one such example. But on a whole, most standard pizza options are unimpressive and not up to par with the traditional, excelling Disney standards you would have expected.

Most people don’t think of cheeseburgers and spring rolls as being one and the same, but that’s the combo you’ll find at the Magic Kingdom’s Spring Roll Cart in Adventureland. While the cart’s other equally unconventional Pepperoni Pizza Spring Rolls have garnered a large fan base, the Cheeseburger Spring Rolls have admittedly more mixed reviews. For some the taste of a burger and the texture of an egg roll just aren’t compatible. Others are turned off by the concoction of mixtures and fillings, including pickle mayo—a deal breaker for someone who is neither a fan of mayo nor pickles. Others may not object to the taste, per se, but should consider whether or not a serving consisting of two spring rolls that are of no significant size is filling enough to be worth the recently risen price of $9.50.

Perhaps you like donuts. Perhaps you like grilled cheese. But that doesn’t necessarily mean you like them served up together, or do you? All the same, that’s what’s being done at Everglazed Donuts & Cold Brew over in Disney Springs. Known for their wildly creative spin on donuts, the crafty concoctions here span a broad range flavors, tastes, and mixes, including cereal-studded toppings, cookie and candy bit infusions, and so much more. And as is the case with most other donut shops, there are a few alternative eats you’ll find on the menu here as well, such as sandwiches. But wait! What if sandwiches and donuts didn’t have to be altogether separate eating entities? That’s why Everglazed allows guests the option to substitute the sweet bun all sandwiches come served up in with a griddle-glazed donut at the cost of just $1 extra! And many fans take them up on the offer; it’s just too unique an opportunity to miss. But how does that render with sandwiches like their signature Grilled Cheeeeeese and others you don’t typically associate with being served between two slices of a donut? Well for some it’s a pleasantly appealing option they never would have expected. For others, it’s just a horrendous epicurean experience gone wrong. It’s one of those controversial, mixed-review menu items that you either hate or love. To be in the latter category must mean you’re pretty cheesy.

Any fans of the former Club Cool beverage outpost in EPCOT know exactly what we’re talking about when we say the word “Beverly.” And for those who have never tried it take note—Club Cool will be returning to the park soon, so you will have your chance to try it out for yourself. But would you even want to? Since Club Cool allowed guests the option to sample unlimited complimentary sips of Coca-Cola affiliated soft drinks from around the world, taking the risk on this medicinal-flavored soda from Italy was one of those infamous must-try experiences. And for those who don’t want to wait for Club Cool’s return, do take note that Beverly can still be found at the Coca-Cola Store in Disney Springs. And with its Rooftop Beverage Bar, you can even sit and share in a drink—including Beverly. In doing justice to this seemingly mutually agreed-upon disgusting drink, there’s even a nice cocktail offering known as Beverly’s Revenge, which includes Beverly, blended along with Hendrick’s brand gin, blackberry liqueur, cherry syrup, orange slices and a sprig of mint. While the combination might mollify Beverly’s intensity, at the cost of $13 and the foreknowledge of what Beverly tastes like in its original context, do you really want to cough up the cash on this one?

Don’t let the name of horrendous hot dog fool you. The only kingly claim to fame it has to boast about is being king of what is quite possibly the worst combination of ingredients ever assembled onto one hot dog. How did they even come up with it? Furthermore, why would anyone even want to order this off the menu? Well they can’t, technically, because it’s not actually on the menu. It’s an elusive secret selection served up at the Hot Diggity Dogs Food Truck over at Disney Springs.  To order it, you must make your request known by reciting the not-so-secret catch phrase: “Hot dog, hot dog, hot diggity dog.” Then brace yourself (and warn your taste buds too) about what’s to come; a messy all-beef hot dog ensemble loaded up with banana-honey mustard, a spicy peanut butter spread, chipotle-berry preserves, and bacon, all packed into a French toast-battered cereal-crusted hot dog bun! Now that you know what it’s all about, you may (or may not) want to reconsider a request for this doggone digestive disaster.

We hope you’ve found this list helpful. As you can see some snacks at Disney are rather appealing while others are downright appalling. But not all indicators rest in flavor or price alone, and we recognize that everyone has their own personal tastes to consider or reasoning for why they may be drawn to or repelled by a particular item. Keep this in mind as you venture through Walt Disney World and always remember to do what’s right for you personally.