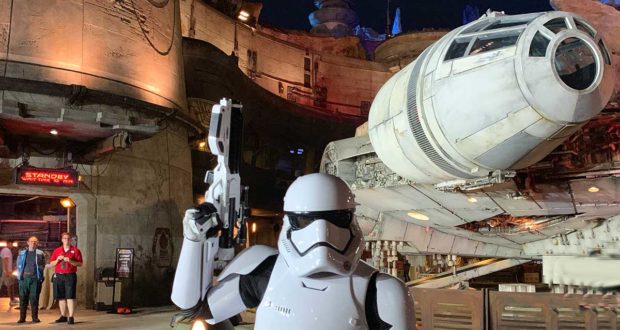 Have you been struggling to find your latest ‘Star Wars’ fix and can’t wait until season 2 of ‘The Mandalorian’ this October, or the recently announced ‘Star Wars: The Bad Batch’ scheduled for 2021? If you have been, then you’ve probably already binged the entire ‘Star Wars’ library on Disney Plus by now too. Well, there’s no need to worry – Walt Disney World Resort is now open, and there’s no better time to talk about some of the secrets of the out-of-this-world themed land Star Wars: Galaxy’s Edge. So here are 6 things you may not have known about the world of Batuu at Disney’s Hollywood Studios. Trust us, this is the way…

Star Wars: Galaxy’s Edge is set on the remote trading outpost planet of Batuu, found on the outer rim of the faraway galaxy in ‘wild space’ (though it’s fair to say that entire galaxy is pretty wild). What you might not know is that Batuu is considered official canon as part of the ever-flowing ‘Star Wars’ universe. However, it has so far only appeared in the likes of the ‘Clone Wars’ TV series. If it does appear on the big screen one day, though, don’t expect to spot yourself in the background drinking some blue milk from Oga’s Cantina. Nevertheless, there’s nothing more thrilling than stepping foot onto a ‘Star Wars’ planet before even seeing it on the silver screen.

5. There Are Plenty Of ‘Cameos’

There’s a reason we titled this as ‘character sightings’ and not ‘character greetings’. Technically speaking, there are no Character Greetings at Star Wars: Galaxy’s Edge. But don’t worry, you can still meet the likes of Darth Vader, BB-8 and Chewbacca in Disney’s Hollywood Studios’ Animation Courtyard (though they currently remain unavailable). In Batuu, however, characters tend to be roaming around, which can actually help make your galactic experience a little bit more authentic. If you’re Force-sensitive, you probably won’t miss Kylo Ren and his First Order Troopers, Rey and many more. With that said, you might not necessarily want Kylo Ren to see you, though…

4. The Soundtrack Is Scored By John Williams

While you’re exploring Batuu, the surrounding music might sound familiar. Sure, anyone on the planet would recognize the many ‘Star Wars’ themes or any related score that contains strands of those epic, adventurous beats. But then not everyone composer in the world can do it justice. The themed land’s theme music – the masterfully carved “Star Wars: Galaxy’s Edge Symphonic Suite” – was composed by none other by the legend himself, John Williams. He even won a Grammy Award for Best Instrumental Composition! Hardly a shocker, though, considering he can wield a conductor’s baton like a lightsaber.

3. There Are Countless Hidden Mickeys

As Star Wars: Galaxy’s Edge is a remote trading outpost where you’ll find smugglers by the dozen, it might come as no surprise to learn that it’s not only a hive for all the scum and villainy in the galaxy, but a wealth of Hidden Mickeys too (or perhaps they’re actually just shapes of Tattooine along with its two suns…). However, revealing their existence is one thing, but exposing their locations is another. Besides, the truth is we don’t know where to find them all, and we wouldn’t exactly want to spoil the fun if we did. What we can tell you is that there are plenty to find – you just need to use the Force to find them (and obviously your eyes too).

If you’re looking for Batuu’s darkest secrets, why not pay a visit to Black Spire Outpost. This is where you can undertake secret missions via the Play Disney Parks Mobile app, which transforms into the  highly interactive Star Wars: Datapad and drops you right in the middle of the battle between the Resistance and the First Order. With the Datapad you’ll be able to take on missions, speak with real droids (no, you don’t need to be a multi-linguist like C-3PO) and more. Remember – being a part of the Resistance means you’ll have to do some serious infiltrating. So may the Force be with you…

Secrets of the faraway galaxy won’t always be limited to Star Wars: Galaxy’s Edge – soon to be docking near Disney’s Hollywood Studios is an extension-of-sorts in the form of Star Wars: Galactic Starcruiser. While not directly a part of Star Wars: Galaxy’s Edge, it will still occupy the same universe as Batuu. This 2-night experience will see you immersed into the Halcyon, where you’ll enjoy mind-blowing views of space, interact with passengers and familiar characters, and much more! When this first-of-its-kind, interactive adventure finally makes a landing, it’s fair to say that the circle will be complete.

There are many more secrets to Star Wars: Galaxy’s Edge – but finding them yourself is half the fun! Before you visit, be sure to check out the official Disney World website to keep up to date with safety measures and instructions on how to best plan your visit. We have spoken.

2020-07-21
Daniel
Previous: Tips For Keeping Safe From Germs On Rides at Walt Disney World
Next: DIY Recipe Box Inspired by Tiana from “The Princess and the Frog”