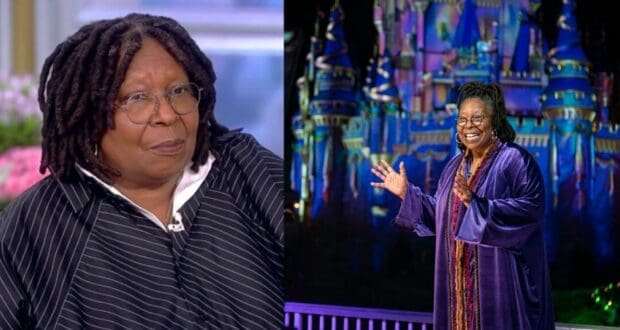 Whoopi Goldberg, host of ABC’s “The View” and well-known Disney Legend is hitting the news this morning as she has been suspended from ABC for a holocaust comment she made on January 31.

According to CNN, ABC News has suspended Whoopi Goldberg, the host of ABC’s “The View”, for two weeks beginning Tuesday night, February 1 for a Holocaust remark. The ABC News President, Kim Godwin, issued a statement reading, “Effective immediately, I am suspending Whoopi Goldberg for two weeks for her wrong and hurtful comments.” Godwin adds, “While Whoopi has apologized, I’ve asked her to take time to reflect and learn about the impact of her comments.”

Goldberg drew significant criticism for falsely declaring that the Holocaust was “not about race.” She issued an apology via Twitter on January 31, 2022 saying,

“On today’s show, I said the Holocaust “is not about race, but about man’s inhumanity to man.” I should have said it is about both. As Jonathan Greenblatt from the Anti-Defamation League shared, “The Holocaust was about the Nazi’s systemic annihilation of the Jewish people – who they deemed to be an inferior race.” I stand corrected. The Jewish people around the world have always had my support and that will never waiver. I’m sorry for the hurt I have caused. Written with my sincerest apologies, Whoopi Goldberg.”

As one would suspect, there are several controversial comments to Goldberg’s apology. She also apologized during the opening of “The View” on February 1, 2022.

ABC News President, Kim Godwin, adds to ABC’s statement about Goldberg’s suspension with, “The entire ABC News organization stands in solidarity with our Jewish colleagues, friends, family and communities.” Goldberg has been hosting ABC’s “The View” since 2007.

Whoopi Goldberg (Caryn Elaine Johnson) is well known across the Disney fandom for her deep involvement with many Disney projects over the years which has landed her as a Disney Legend in 2017. Her voice stood out as Shenzi, the leader of a clan of hyenas, in the 1994 “The Lion King”. She’s had other voice roles such as Miss Mittens in “Snow Buddies” and Stretch in “Toy Story 3”. The list goes on with cameos in “The Muppets”, and the voice of Ursula in “Descendants 2“.

Recently, in celebration of Walt Disney World’s 50th Anniversary, Whoopi Goldberg hosted, “The Most Magical Story on Earth” ABC Special. She has also hosted other specials for Disney such as “Decorating Disney: Holiday Magic”. Goldberg is well known as Deloris Van Cartier (AKA Sister Mary Clarence) in the “Sister Act” films and is currently involved in the upcoming “Sister Act 3” film coming to Disney+.