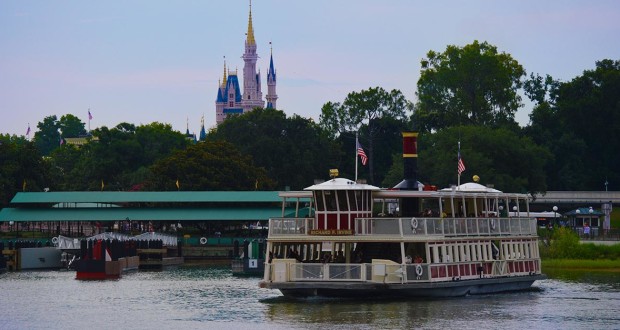 Disney fanatics who park their vehicles in Magic Kingdom’s main parking lot have a couple of options when it comes to getting across the Seven Seas Lagoon to the park. Many guests enjoy traveling via the iconic monorail system at Disney World, and the number of items for sale in stores across the resort that feature the train are testament to this fondness. Indeed, it’s a great mode of transportation – for land lubbers! For those guests with a little bit of pirate in their blood, however, there’s only one way to travel and that’s by water! Disney World’s ferry boats provide a relaxing and fun way to get to and from the Magic Kingdom, and many guests prefer to travel by boat whenever they visit the resort. Here are a few amazing facts about Disney ferry boats:

Even some of the most hardcore Disney fanatics are unaware that Disney World has offered transportation over the water since opening day on October 1, 1971. The original ferry boats were the Ports-O-Call and the Southern Seas, two Osceola-class sidewheelers powered by steam engines. Each could carry up to 250 passengers.

The sidewheeler steamships were a unique way to travel, but they were slow-moving and temperamental and Disney quickly realized they needed something a little more reliable and speedy. Thus, the Magic Kingdom I and Magic Kingdom II, diesel-powered ferry boats, were commissioned and then built at a Tampa Bay, Florida shipyard. Constructed primarily of steel beam and plate, each ferry weighed in at 380,000 pounds. They were put into service at Disney World Resort on July 2, 1972.

The diesel ferry boats did a much better job of keeping up with the demand for guest transportation, but by 1976 Disney saw the need for a third ferryboat. This time, however, the construction of the ferry was handled right on Disney World property. It was built in the shops located in the drydock area off Bay Lake. Named Kingdom Queen, this new ferryboat utilized aluminum as well as steel, which lowered its overall weight to a trim 360,000 pounds! It was put into service on June 30, 1976.

When the Kingdom Queen was built, it featured a few options that the Magic Kingdom I & II did not have. It was outfitted with a dance floor on the upper deck, men’s and women’s restrooms, and two bars in order to be able to perform charter excursions. In 2001, the bars were removed and benches were replaced to make the ferry more efficient for carrying passengers. The bathrooms still exist but have long since had the plumbing disconnected, so they are unusable.

All three of the diesel-powered ferry boats are modeled after the 1932 Staten Island Ferry design, and are sized to approximately 3/4 scale of that ferry.

In 1997, the ferry boats were re-commissioned with new names honoring three men who were vital to the design and the construction of not only Disney World, but Disneyland as well. Magic Kingdom I became the Admiral Joe Fowler, Magic Kingdom II became the Richard F. Irvine, and Kingdom Queen became the General Joe Potter. Curiously, at the time of the re-naming there was already a Richard F. Irvine boat in existence as that was the name of the riverboat in Liberty Square. It was at that time that the riverboat was renamed the Liberty Belle.

The ferries are 120 feet long and nearly 35 feet wide. Their draft is 5’ 6”, which is shallow enough to let them cross the waterbridge connecting Bay Lake to Seven Seas Lagoon. Each has two Caterpillar engines that generate up to 400 horsepower apiece. They all have a capacity of 600 guests. The Admiral Joe Fowler can be identified by the green color of the panels down its sides and around its pilothouses. The Richard F. Irvine has red panels, and the General Joe Potter has blue panels.

Unlike the rides inside the parks, the ferry boats do not rely on rails for guidance. They are all free floating and piloted by trained captains in Disney’s Watercraft Department. The training focuses heavily on being able to maintain control over the large boats so that guests can be safely transported back and forth between the Transportation and Ticket Center and the Magic Kingdom.

While every Cast Member in the Watercraft department goes through comprehensive training, any combination of large, powerful boats, nature, and human error can result in accidents and even tragedy. Guests can be injured during the ferry boat’s approach or departure from the dock if the wind or pilot error causes the ferry to glance sharply off a piling or mooring dolphin. And despite specific instructions to keep clear, some guests in rental boats have been in accidents with ferry boats when they’ve gotten too close.

Due to the larger capacity of the ferry boats vs. the monorails – 600 vs 360 – at peak times it can actually be faster to take the ferry across Seven Seas Lagoon. All three ferries are typically in service at these busy times, which means they depart the dock approximately every five minutes. So if you want to get to Magic Kingdom quicker in the morning or back to your car quicker in the evening, you might want to bypass that monorail line in favor of the ferry boat dock!

Have you ridden across the Seven Seas Lagoon on the ferry boat? How did the experience compare to your rides on the monorail?