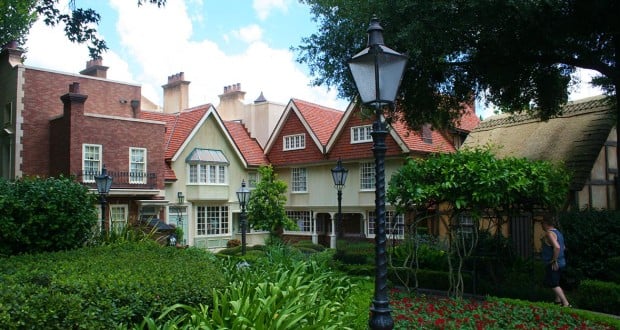 You know that moment when you stumble upon a hidden and empty Disney World alcove and you look around you, realizing with certainty that you are the first and only one to have ever stepped foot onto those grounds? You sit down, close your eyes in giddy delight, and vow to never, ever tell another soul about your secret Disney hiding place. Okay, so that will never actually happen, but for a slight second, standing in the scenic serenity of quiet space, you may actually trick yourself into believing it. The truth is, with the tens of millions of park goers that frequent Walt Disney World each year, there is simply no such thing as untraversed territory. There are, however, some spectacularly breathtaking spots that are quite secluded, making it seem like your own private little corner of the “World.”

What makes for an amazingly beautiful “secret” spot at Walt Disney World? For one, this location has to provide you an appealing view, whether of a sun-glinting lake, a fireworks show, lush landscape, or the like. It doesn’t necessarily have to be pin-drop quiet, as you will be hard-pressed to find such a location outside of your own personal hotel room (and even that’s no guarantee), but it does need to give you some form of respite and sanctuary. These hideaways are “secret” because they reside outside of the bustling pathways, removed from the sometimes overwhelming throngs of people and are just waiting to be discovered by the unknowing wanderer. I’ve found that even during a busy time of year you’ll likely be able to enjoy these locations without too many other intrud—ahem—Disney guests, and might even find yourself enjoying this space solo. Without further ado, let’s journey together as we countdown our 10 amazingly beautiful secret spots around Disney World.

There’s a lot going on at this 4th floor Contemporary Resort hotspot from food to shopping to a fun arcade. With the addition of Bay Lake Tower in 2009, a bridge was built to connect the two resorts along with an outdoor patio/balcony on the north end of the Grand Concourse. Though the view from this outdoor patio doesn’t quite compare to the view you’d receive if paying high dollar for a spectacular dinner at the 15th floor California Grill, it certainly is a fabulous location to catch the Magic Kingdom fireworks display at night. The connecting Sky Way Bridge is also a perfect spot to stop and look out towards Magic Kingdom, Bay Lake, the Seven Seas Lagoon, and the surrounding Disney Resorts. Here, you can catch the fireworks as well as the enchanting Electrical Water Pageant that moves along the water. Because of the monorails whizzing by directly above you, I wouldn’t consider the observation deck particularly “quiet,” but this location—as well as the bridge—never seems to get too crowded, especially if you experience it outside of the nightly fireworks show times.

Tom Sawyer Island is a rustic hideaway that can oftentimes feel uninhabited. Getting “lost” amongst the dark caves, exploring the forts, and navigating the playgrounds remains a wonderfully vivid childhood memory for me. Despite the passing of time, much of Tom Sawyer Island remains untouched and unchanged, allowing for the nostalgia to come flooding back the minute I step foot off the raft and onto the woodsy terrain. Childhood adventures or not, this spot is a great place to sit and reminisce, reflect, and relax. While there are many places on this island that will provide you this luxurious opportunity, Aunt Polly’s open-air covered porch will practically guarantee peace and quiet. At one time a bustling quick-service food spot, what remains of Aunt Polly’s is now a non-operating building with an attached gazebo, providing shade and places to rest. Overlooking much of Frontierland and Liberty Square, as well as the Haunted Mansion attraction and queue, you’ll even be granted the perfect view of the Liberty Belle Riverboat while it’s at the landing.

This is one of those locations that you would swear nobody knows about. I’ve never had to share this space with other people (other than my husband and/or friends) and have many a time enjoyed a drink or two while looking over the Boardwalk’s beautiful and meticulously landscaped courtyard. This often overlooked lounge which is tucked away down the hall from Boardwalk’s Main Lobby rarely sees a crowd. It’s a quiet and charming retreat and a perfect place to sneak away should you need some solace. They are open for a continental breakfast from 6:30am to 11:00am and the lounge (with full bar) operates from 5pm to 12am. Grab a refreshing drink to wet your whistle and kick back on the outdoor patio for some true R&R with a great view.

The forest awaits you at Fort Wilderness Resort and Campground, beckoning you to put on your walking shoes and explore. The truly neat thing about this resort is that it seems so far removed from the often chaotic pace of the Disney Parks, when in actuality it’s a short boat ride away from Magic Kingdom. Among these tree-lined trails and paths is a cozy remoteness, tricking your mind into believing that you aren’t actually in the midst of one of the most visited tourist locations in the world. During the afternoon, the white sandy beach near the boat launch is typically incredibly quiet and void of people. The peaceful lapping of the beautiful Bay Lake is all you’ll need to slip into a deep state of relaxation (and lucky for you, there are plenty of lounge chairs available to do so). If being on your feet and exploring is more your “nature,” then head towards the trail that connects Fort Wilderness to Wilderness Lodge Resort. This paved path is woodsy and wonderfully secluded, except for the frolicking wildlife that naturally resides in the surrounding forest.

It’s often all too easy to follow right along with the crowds of park goers, taking the most obvious, wide open routes set before you to get from point A to point B. Heeding the poetic words of Robert Frost we’d learn, however, that taking the road less traveled sometimes makes all the difference. If you do a bit of exploring at the Magic Kingdom—or examine the detailed park map—you’d find a paved path that snakes behind the Tomorrowland Speedway track, connecting Storybook Circus to the Space Mountain building that houses the arcade. This path is quiet and typically sees few park goers as it is somewhat hidden from plain sight. There are plenty of things to observe along this route, from the Steam Train to the Contemporary Resort to the beautiful landscaping that follows this walkway. You can enter from New Fantasyland between Goofy’s Barnstormer and the Railroad Station or enter from the side of Space Mountain.

There is a lovely English garden with beautiful flora and a hedge maze located behind the buildings and shops at the United Kingdom Pavilion in Epcot. During select hours of the day, a cover band can be found playing chart-topping British retro hits of the ‘60s on a small stage off to the garden’s edge. When the band isn’t performing, however, this secluded location is quiet and serene, a perfect place to get away from the crowds and rest your feet.

One of my favorite dining locations on Disney property is Narcoossee’s, located on the water at Disney’s Grand Floridian Resort and Spa. Exclusive to patrons of this signature dining establishment, a waterfront wrap-around verandah borders the waters of the Seven Seas Lagoon, giving you a perfectly perfect view of Cinderella Castle. Because this space is designated to dining guests, you will find yourself in a very intimate, uncrowded spot if you want to enjoy the quiet lake waters, the Electrical Water Pageant, or the nightly Magic Kingdom fireworks show. One of my favorite Disney “secrets” is going to Narcoossee’s simply for a fabulous dessert at the bar (no reservations needed!) and then taking advantage of the beautiful verandah afterwards to watch the fireworks.

I stumbled upon this “hidden” location on an early morning jog during a stay at Disney’s Old Key West Resort. The trail borders the canal that the resort transportation ferries use to travel to and from Downtown Disney. The paved path eventually merges with a Saratoga Springs Resort walkway and can even lead you to Downtown Disney (as well as the Treehouse Villas via a small bridge). Open from dawn to dusk (there is no lighting) this nature path has you winding around the beautiful Disney Resort grounds. You’ll see the golfers from Saratoga Springs on one side of you, the canal on the other, and even the Characters in Flight balloon soaring in the sky above Downtown Disney in the distance. This off-the-beaten-track trail is peaceful, secluded and wonderfully tranquil. There are no benches along this route, so only go when you have the energy for a long walk/run/bike ride.

There is a promenade found behind the Congress Park section of Disney’s Saratoga Springs Resort that takes you along the sun-glinting Village Lake which separates this resort from the lively Downtown Disney. Walking along this peacefully remote footpath and/or taking a seat on one of the many garden benches will afford you a spectacular full panoramic view of Downtown Disney. Capturing a glimpse of Downtown Disney from this side of the water is simply electrifying with the magnificently eye-catching shops, restaurants and attractions they offer. Here you can indulge in all the sights of Downtown Disney, without all the hustle and bustle.

What’s your favorite “secret” spot around Disney World? Let us know in the comments below! Don’t worry, we won’t tell anyone. *wink, wink*