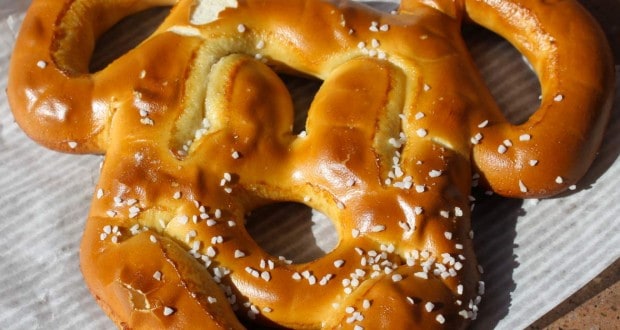 It never fails. After an incredible vacation at Walt Disney World, the post-vacation letdown sets in. We miss the rides and attractions at the parks, we miss seeing our favorite characters, and we miss the incredible feeling that comes with being at the Most Magical Place on Earth. And then of course, there’s the food. Sure, we ate our fair share of theme park staples like burgers and chicken strips. But what we really miss – what our taste buds truly crave – are those iconic foods that are so closely associated with Disney World Theme Parks. Here are the foods we miss the most when we’re not in the parks:

Nothing satisfies the gnawing hunger that comes from a long day of walking from attraction to attraction like a smoky, meaty turkey leg. Gripping one of these with our fist as we roam around Tomorrowland can turn even the most well-mannered of us into cavemen. Aside from Thanksgiving though, most of us don’t get the chance to exercise our inner Neanderthal nearly enough.

Perhaps a surprise entry on the list, some visitors to Disney’s Hollywood Studios may take one look at this item on the menu board and not make it past the first word. But Disney veterans know that it’s the second two words that make the difference! With a rapidly growing fan base, the carrot cake cookie is becoming one of the worst kept foodie secrets in all of the Disney Resort.

A sinfully delicious, fresh-baked brownie topped with buttercream and then topped with fudge? Now what could top that? While some treats at Disney’s Animal Kingdom appear to be undergoing fundamental changes that are drastically affecting their taste, the Brownie Paw is as yet the same delicious treat it’s always been. Let’s hope it stays that way!

While they can now be found across the United States in any number of places, for many people, their introduction to churros came at a food cart in a Disney park. This warm, cinnamon-and-sugar pastry is still a strong seller in the parks, possibly because no state fair version can hold a candle to the ones served up with a little Disney magic!

What is it about fried dough that can be so appealing? Considered by some guests to be the best reason for visiting Liberty Square, this tasty treat can also be found in Epcot and Disney’s Hollywood Studios. Some enjoy the cinnamon apple topping, but for the purists there can only be powdered sugar.

A trip to Epcot simply isn’t complete without picking up the shaved-ice confection called Kaki-Gori. On particularly hot Florida afternoons, this sweet and fruity treat really hits the spot. And it certainly doesn’t hurt that you’ll find these delights strategically located near the halfway point of your walk around the World Showcase at the Kabuki Cafe in the Japan pavilion. Right when you need a little cooling down. Well played, Disney.

Scientists haven’t been able to prove it just yet, but Disney guests will swear to the fact that making a snack in the shape of Mickey Mouse’s head greatly improves the flavor. Though it is made primarily out of flour and water, such is the case with the simple pretzel. And there are a number of ways to enjoy this doughy snack. For some, the sweet cream cheese pretzel can’t be beat. Those looking for more of a kick swear by the jalapeno stuffed pretzel. Still others prefer the classic pretzel with salt – with or without cheese for dipping.

What’s not to like about a cinnamon roll that’s roughly the size of a barge? Don’t you know, can’t you guess? They must have left a lyric out of Gaston’s song in Beauty and the Beast, because apparently no one has a sweet tooth like Gaston either! This gooey, decadent delight available at Gaston’s Tavern may not have five dozen eggs in it, but everyone will be awed and inspired by you if you can eat it in one sitting. Or you could always share it with your bumbling sidekick.

This simple yet delicious treat seems to be an even mixture of vanilla ice cream, rich chocolate coating, and childhood innocence. Whether you start on the left ear or the right ear, nothing conjures up memories of our childhood trips to Disney World quite like the Mickey Premium Ice Cream Bar. Probably because this was most likely the first Disney treat that many of us received on our very first trip to Disney World.

This classic Disney treat dates back nearly 40 years, when Dole replaced United Airlines as the sponsor for Disneyland’s Enchanted Tiki Room attraction. What’s truly amazing about the Dole Whip is the number of people who are still unaware of its existence. Nonetheless, the number of people who are devoted to this iconic treat ensures that the line to get one is always long. The Dole Whip is technically just the frozen soft serve in a cup, but the Pineapple Float or “Dole Whip Float” as it’s commonly known, is said to be the better selling item. For many visitors to the Magic Kingdom or Disneyland, no trip is complete without stopping to get a Dole Whip.

Is your favorite Disney World food item on this list? Or has a serious injustice been done with the omission of the Disney treat you love to eat? Let us know which food you crave the most when you’re not at Disney World!