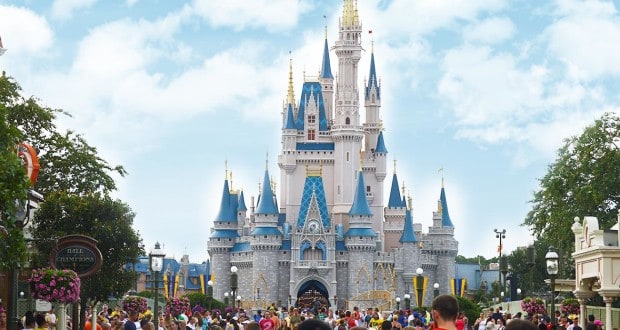 The Magic Kingdom at Walt Disney World in Florida is one of the most popular theme parks in the world, and is visited by millions of travelers every year. There are so many wonderful rides and attractions that there are literally dozens of books out there that describe every detail, or do they? There are some very little known facts that are not always mentioned in these books or brochures. I am bringing to your attention just a few for you to think about and investigate for yourselves. At Walt Disney World, each visit is a new experience; there is always something new to discover. With that said, here is my list of little known facts about the Magic Kingdom at Walt Disney World.

1. Park Design–Walt Disney purposely designed the parks so when you pass from land to land, you don’t see the others. For instance, if you’re in Liberty Square, you can’t see Fantasyland because of trees, buildings, and distractions like the water wheel on the Liberty Belle steamship as is sits in the dock waiting to load or unload. The music and sounds change from land to land, so that while you are in Liberty Square you are surrounded by buildings and sounds associated with the days of early Colonial America. The pavement changes to match the theme of the new land.

2. Utilidors–By now, most visitors to Walt Disney World are aware of the underground tunnels and utilidors that house waste removal, electrical operations, deliveries and storage warehouses, food service, costuming, and cast member services (cafeteria, lockers, even a hair salon). But what some people don’t know is that the original reason for the utilidors is the fact that once Walt Disney was bothered when he saw a cast member dressed as a cowboy walking through Disneyland’s Tomorrowland en route to his position in Frontierland. He felt it detracted from the guest experience. Therefore, when Walt Disney World was being planned, the engineers designed utilidors to keep park operations out of guests’ sight.

3. Gum?–One fact I found very interesting is that you cannot buy gum anywhere at any Disney Park. You will also not see a lot of gum stuck on pavements, tables, chairs, or ride vehicles. Of course, you can bring your own gum and will not get in trouble for chewing it, but because it is not sold in any theme park, the gum remnants are much fewer and makes for a cleaner park. This is another pet peeve of Walt Disney himself. He always put the importance of the guest experience first, and no one wants to sit or step on someone’s sticky gum residue.

4. Partner’s Statue–On the Partners Statue in front of Cinderella’s Castle, look very closely at Walt’s right finger at his ring—it is an Irish Claddagh ring (traditional Irish ring which represents love, loyalty, and friendship) which Walt and his wife, Lillian, bought for each other while on a trip to Ireland, and they wore them every day. Also, take a close look at Walt’s tie, and you will see the logo, STR, which refers to the Smoke Tree Ranch vacation area where Walt had a home.

5. Red Pavement–The Main Street pavement in the Magic Kingdom is painted red because Walt wanted to roll out the red carpet for all his guests. The red pavement also alerts any cast member to stay in character until the pavement changes color, even behind the gates out of view, just in case they do not close properly. As long as they are on the red pavement, they remain in character. It’s these details that make the Disney Parks so magical!

6. Trash Cans–Check this small fact out: Need to throw something away. Trash cans throughout the Park are no more than 30 steps away from you. It’s a challenge, but you can do it. Just count 30 steps and look around for a trash can.

7. Coins in the Fountains–Have you ever wondered where the coins tossed in all the fountains, wishing wells, and water-based rides in the Magic Kingdom end up? The coins from all the fountains are collected and for more than thirty years Walt Disney World has donated the money collected to Central Florida Children’s Charities, such as The Foundation for Foster Children, Community Based Care of Central Florida, and several others. The next time you pass by one of the lovely fountains in the Magic Kingdom, toss in several coins; it’s for a great cause!

8. Liberty Square—Here in Liberty Square, there is a pair of unique props installed by Disney Imagineers which illustrate Disney’s attention to detail. As you are walking along the West side of the Hall of Presidents’ attraction in Liberty Square, look up at one of the windows on the second floor. You will see two lamps that are illuminated, representing the signal (one if by land, two if by sea), which prompted the midnight ride of Paul Revere, who quickly mounted his horse and galloped throughout the Colonies shouting, “ the British are coming, the British are coming! ” It’s better to look for them after the sun goes down, because they are easier to spot.

9. Tom Sawyer’s Island—While visiting Frontierland, board a motorized raft over to Tom Sawyer’s Island and enjoy a trip back in time to the days of Tom Sawyer and Huckleberry Finn. On this whimsical fun-filled island is a giant playground for children and adults alike. There are caves to explore, winding walkways to travel, an old Western Fort to explore, barrel and suspension bridges to cross, and plenty of other activities to experience. As you make you way around the island, you will come across a small landing, overlooking the Rivers of America. There are two old-fashioned wooden rocking chairs where you can sit back and enjoy the view of the Big Thunder Mountain Railroad attraction, and wave to the passengers of the Liberty Belle as it passes by. This is an excellent place to relax and enjoy a few moment of peace and quiet.

10. A Kiss Goodnight—The Magic Kingdom has a special way of saying goodbye to its guests at the end of every night. It is called the Kiss Goodnight. About one hour after the Magic Kingdom closes, Cinderella’s Castle begins to sparkle, and a beautiful rendition of “ When You Wish Upon A Star ” plays while a narrator thanks everyone for coming and wishes them a special goodnight and goodbye. It really casts a magical spell on anyone who sticks around to watch this fantastic ending to a very memorable stay at the Magic Kingdom.

There are so many hidden Mickey’s, magical secrets, and mysteries to be discovered at Walt Disney World. The ones I have listed are just a few of the Magic Kingdom little known facts. While you are visiting the Magic Kingdom, see what you can find for yourself. You never know, someday maybe you’ll write a book about what you find at the most magical place on earth.