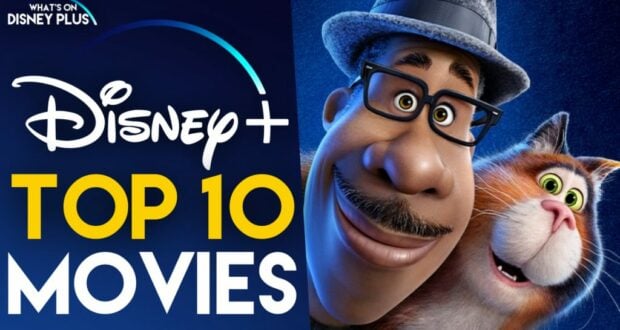 How many of these top 10 movies did you catch on Disney+ this past month? Take a look and then add those you missed to your “must watch list” today!

Pixar’s “Soul” introduces Joe Gardner, who is a middle-school band teacher who gets the chance of a lifetime to play at the best jazz club in town. But one small misstep takes him from the streets of New York City to The Great Before – a fantastical place where new souls get their personalities, quirks and interests before they go to Earth. Determined to return to his life, Joe teams up with a precocious soul, 22, who has never understood the appeal of the human experience. As Joe desperately tries to show 22 what’s great about living, he may just discover the answers to some of life’s most important questions. This is a really enjoyable Pixar movie that has one level for kids and a much deeper level for adults to think about their lives.

Easily one of my favourite modern animated movies and sees Moana answer the call of the ocean, taking to the seas to save her people from a terrible curse. The movie features Dwayne “The Rock” Johnson as the Demigod Maui and his character really adds some great comedy moments. Moana delivers an awesome soundtrack including “Your Welcome” and “How Far I’ll Go”.

Elsa the Snow Queen has an extraordinary gift — the power to create ice and snow. But no matter how happy she is to be surrounded by the people of Arendelle, Elsa finds herself strangely unsettled. After hearing a mysterious voice call out to her, Elsa travels to the enchanted forests and dark seas beyond her kingdom — an adventure that soon turns into a journey of self-discovery.

This movie was a juggernaut for Disney in the past decade, from the box office, merchandise, music and even on Broadway. When their kingdom becomes trapped in perpetual winter, fearless Anna (Kristen Bell) joins forces with mountaineer Kristoff (Jonathan Groff) and his reindeer sidekick to find Anna’s sister, Snow Queen Elsa (Idina Menzel), and break her icy spell. Although their epic journey leads them to encounters with mystical trolls, a comedic snowman (Josh Gad), harsh conditions, and magic at every turn, Anna and Kristoff bravely push onward in a race to save their kingdom from winter’s cold grip.

The biggest blockbuster ever is set after the devastating events of Avengers: Infinity War, the universe is in ruins due to the efforts of the Mad Titan, Thanos. With the help of remaining allies, the Avengers must assemble once more in order to undo Thanos’ actions and restore order to the universe once and for all, no matter what consequences may be in store.

Toy Story 4 sees Woody attempt to make Forky, a toy, suffering from an existential crisis, realise his importance in the life of Bonnie, their owner. However, things become difficult when Gabby Gabby enters their lives.

To save her ailing father from serving in the Imperial Army, a fearless young woman disguises herself as a man to battle northern invaders in China.  This live-action version is very different to the original animated one, so its best to not to try to compare the two.

This is another fantastic modern Disney animated classic, it tells the story of Officer Judy Hopps, who is the first bunny on Zootopia’s police force, who jumps at the chance to crack her first case – even if it means partnering with scam-artist fox Nick Wilde to solve the mystery. The underlying story of how racism is represented by different animals and the relationship between predators and prey is really interesting.

Pixar’s latest animated smash, Onward, is set in a suburban fantasy world, two teenage elf brothers embark on an extraordinary quest to spend one day with their late father. This is a lovely story and will no doubt leave you wiping away the tears.

During one of Bonnie’s post-Christmas playdates, the Toy Story crew find themselves in uncharted territory when the coolest set of action figures ever turn out to be dangerously delusional. It’s all up to Trixie, the triceratops, if the gang hopes to ever return to Bonnie’s room. Toy Story That Time Forgot is an unforgettable tale packed with family fun!

Have you watched these top 10 trending movies from January or do you need to add them to your list?