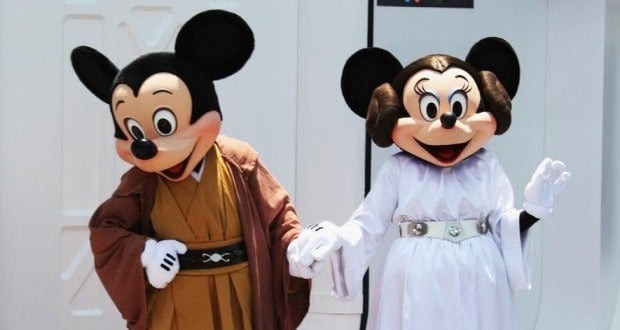 10 Star Wars Experiences Worth Having At Disney’s Hollywood Studios

The force is strong this summer at Hollywood Studios! While the back of the park has previously closed due to construction of the new Star Wars land, there is still much to offer with all things Star Wars. Here are ten Star Wars experiences you should check out on your next visit to the happiest place on earth.

Star Tours has been present at Hollywood Studios since it’s inaugural year in 1989 and has been a fan favorite for years. Guests can hop aboard a simulator Starspeeder 1000 while you blast off into the galaxy and visit several planets from the classic films such as Naboo, Coruscant, Kashyyyk, and a brand new location from the most current film, The Force Awakens. The great thing about this ride is that you can enjoy it over and over again because each flight is completely different. There are multiple story combinations so you will most likely never have the same flight twice. Along the way, you will encounter multiple characters like Darth Vader, Chewbacca, Boba Fett, and C3PO. After the ride, be sure to check out the gift shop, Tatooine Traders, for all things Star Wars.

9. Star Wars: Path of the Jedi

Star Wars fanatics will definitely enjoy watching The Path of a Jedi. This ten-minute retelling of the entire Star Wars saga goes back in time and compiles some of the best moments from past films. In addition, it hints at what is next for the Jedi Order in the future films. If you love the entire series, be sure to check this out! There are multiple shows throughout the day, and since it is played inside an air-conditioned auditorium, it’s also a great way to take a break from the hot Florida sunshine!

December 2015 was the month that officially opened the Launch Bay at Hollywood Studios. This huge building is the host to the Launch Bay Theater, character meet and greets with Chewbacca, Kylo Ren, and the Jawas, exclusive movie props, gaming with popular Star Wars games and game systems, special exhibits, and more. There are also several galleries that will give you an up-close look at replica models, props, models, costumes, concept artwork, and artifacts from the films. There is also a gift shop that sells some really unique items, and within the gift shop, you can personalize your phone case or MagicBand at D-Tech.

Since The Force Awakens was such a high grossing film, it’s only natural to want to know what comes next. The theater at the Launch Bay plays a ten-minute behind the scenes film showing how the newest filmmakers are crafting the future of the Star Wars saga. There are various interviews with the writers, producers and directors of the future films. This short video plays continuously throughout the day and the line tends to move pretty quickly. This is definitely a must see if you are a huge Star Wars junkie.

Who doesn’t love meeting characters? That is one of the main reasons guests love visiting the Disney Parks! At Hollywood Studios, you will have the opportunity to meet some of the most iconic characters form the films including Kylo Ren, Chewbacca, Jawas, and the Storm Troopers. Captain Phasma is also around at the new stage show. These opportunities don’t have fastpasses, so there can be a long wait at times.

5. Jedi Training: Trials of the Temple

If your little one is Star Wars obsessed, you won’t want to miss the Jedi Training: Trials of the Temple. Children (ages 4-12) are recruited by Jedis themselves to be trained, and ultimately test their strength against the Dark Side in this 20-minute show. They will use their lightsabers to defeat Darth Vader, Darth Maul, or the Seventh Sister Inquisitor (from Star Wars Rebels). This is a highly sought after show and it gets filled up very quickly. You can register your child(ren) for this show at the Indiana Jones Adventure Outpost. Registrations for the various shows throughout the day can be done as soon as the park opens and is on a first-come, first-served basis. I recommend heading straight to the outpost to register before you start your day if this is something your little one is really looking forward to.

The Backlot Express is one of the best quick service restaurants in the entire park. Recently, the menu has changed to add some unique Corellian fries, galactic chicken salad, 1/3 lb. angus cheeseburger (with a black bun), and my personal favorite, the Dark Side chicken and waffles (imprinted with Darth Vader of course). The dessert served here is one that true Star Wars fans will love, the blue milk panna cotta. There are a lot of choices to choose from, and they’re all dark side approved!

Star Wars: A Galaxy Far, Far Away is a brand new live show that is put on several times a day where some of your favorite Star Wars characters join each other on stage to bring iconic Star Wars moments to life. Kylo Ren, Darth Vader, Chewbacca, BB-8, Darth Maul, Captain Phasma, and more are ready to light up the stage and bring the force to you! Be sure to check the times guide for showtimes.

2. Symphony in the Stars: A Galactic Spectacular

Walt Disney World is the second largest buyer of explosives. It’s not surprising though, because they put on the best firework displays each and every night in multiple parks. Out of all of the shows I have seen, I have to say that the Symphony in the Stars has to be my all time favorite. The classic Star Wars scores (by the legendary John Williams) from all seven films plays while you watch the sky tell stories with amazing displays of light and dark side fireworks. The dazzling array of colors and types of fireworks will surely leave your jaw hanging on the floor. This show is put on every evening, and is an absolute must see. Be sure to check the times so that you don’t miss it!

This summer, the Symphony in the Stars show will completely transform to Star Wars: A Galactic Spectacular. The fireworks will continue to be totally epic, and the show will not only incorporate the scores from the film, they will include state of the art projection effects, incredible lighting, and lasers to bring the best moments from the saga to life right in front of the Chinese Theater. The show is set to open in June of this year and will replace the Symphony in the Stars each night.