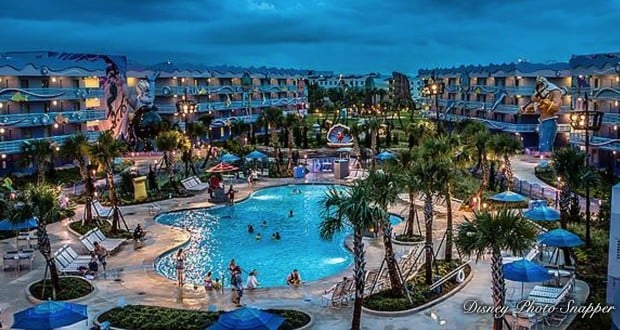 There is nothing like feeling the magic of Disney throughout your entire stay. This is one of the reasons why guests often book their resorts on the Walt Disney World Property. Not only will you enjoy Disney at the parks, but it will also be easily infused at any of the themed resorts Disney has to offer. With more than twenty-five resorts to choose from, you can’t go wrong with staying on Disney property! Here are ten stunning facts about Walt Disney World Resorts that you may not have known!

There are over 30,000 rooms amongst more than twenty-five resorts on the Walt Disney World Resort Property. If you stayed in every single room each day, it would take you sixty-eight years to stay in all of the rooms on property! Sounds like a lot right? If we add the hotel rooms that are located in the independently owned properties (like Sheraton, Four Seasons and Hilton) there would be an additional 10,000 rooms. Looks like we’ll be staying longer than 68 years now, which is definitely not a bad thing!

With all of the Walt Disney Resorts combined, approximately 160,000 guests can occupy the resorts. That’s a whole lotta’ Mickey fans! While that may seem like a high number, there are also over 10 resorts that are on the Walt Disney World property that are owned by other large resort chains (as mentioned above). These resorts hold an additional 50,000 guests!

Disney isn’t just for fun and games, it’s also for business conventions! The Walt Disney World Resorts offers seven dedicated convention resorts that will accommodate any size, theme, or objective any company may have. Choose from beautiful and spacious rooms at the Boardwalk Inn, Contemporary Resort, Coronado Springs Resort, Grand Floridian Resort and Spa, Yacht and Beach Club, and the Swan and Dolphin Resort. How cool would It be to attend a convention at the happiest place on earth?

Marrying the love of your life is quite exciting and most likely, the happiest day of your life. Walt Disney World is known for hosting some of the most beautiful weddings in their theme parks, but did you know that many of the resorts have breath-taking venues? Whether you’re looking for elegance, a modern flare, or a classic background, there is a hotel venue on property that is perfect for you! Choose from venues at the Grand Floridian Resort, Boardwalk Inn, Yacht and Beach Club, Contemporary Resort, and the Swan and Dolphin. Even though these wedding aren’t in the parks, you would be pleasantly surprised as to how beautiful and full of magic these venues are!

6. Art of Animation and Pop Century

When the imagineers got together to build Disney’s Pop Century resort, they wanted to make a building for each decade from the 1900’s, for a total of ten buildings. The original plan was to have two sections separated by a bridge, so that the 1900-1940 buildings (which were going to be labeled ‘The Legendary Years’) were on one side of the property, and 1950-1990 buildings (which were going to be labeled as ‘TheClassic Years’) was on the other.

After constructing all of the buildings planned in ‘The Classic Years’ section, and just one in ‘The Legendary Years’, the unfortunate events of September 11th occurred, causing a delay in constructing the remaining four buildings in ‘The Legendary Years’ section due to a decline in tourism. Production stopped, and after several years, the idea for Art of Animation came to life. They decided to use the property that was meant for ‘The Legendary Years’ for this new resort. Three larger than life buildings were constructed with family suites, and the fourth building, which was originally constructed for the Pop Century, was utilized as standard rooms. This is why the Little Mermaid section of the Art of Animation is not like any of the other sections of the resort. Pretty interesting, huh?

While participating in the Keys to the Kingdom Tour last year, my tour guide informed me that there is still enough land for Disney to construct 20 more resorts. Can you imagine being able to choose from almost 50 resorts for your future vacation? Sounds pretty magical if you ask me!

Towards the back of Disney’s Fort Wilderness campgrounds lies one of the most beloved water parks of old school Disney guests. River Country was a great place to splash-a-frolic and enjoy the beautiful Florida sun. After Typhoon Lagoon and Blizzard Beach were made, River Country was closed for good, and many Disney fans were upset. Since the closure, the park was never touched! The slides, chairs, pools, and everything in between was left completely untouched to just wither away. In the past recent years, many hardcore River Country fans have gone back to check out this abandoned area (and have even posted pictures and videos of how it looks now on YouTube and social media). This is not something you want to even attempt, because it is completely off limits and could result in an arrest for trespassing and ultimately, being kicked off of Disney World property for good. This area can also be seen (by far) if you are boating in Bay Lake, which is connected to the Magic Kingdom Resort areas. There is however exciting news, as Disney has announced this space will become a new Disney Resort called Reflections – A Disney Lakeside Lodge with a possible open timeline 2022.

UPDATE! Plans for the new resort at this location were in full swing before COVID-19 hit. Now, Disney has put the construction on hold. Sadly, it looks like this project is one that will be sitting on the back burner for now!

3. Movies Under The Stars

A great way to relax while staying on property and the happiest place on earth is lounging by the pool or beach and watching a classic Disney flick. Every single Disney Resort on property offers Movies Under the Stars each and every night by the resort pool or beach. Guests can relax and watch a different Disney movie each night. Schedules for the various movies being played are available at the front desk of each resort. This has slowly grown to be more popular at the resorts, so Disney expanded them to ensure that guests at all of the properties can enjoy this evening treat!

There is only one resort that offers a live band amongst entering the grand lobby. The Grand Floridian Resort and Spa is known for its elegant Victorian décor, so a live band playing classic tunes is perfect for its large and gorgeous lobby. In addition to the classic band, there is also only one harpist on the Walt Disney World Resort, and she is located at the award-winning restaurant, Victoria and Albert’s, inside the Grand Floridian Resort and Spa as well.

Hidden Mickeys have become quite the trend at the parks. Guests have played various scavenger hunts looking for several hidden Mickey’s in virtually every space and area, but did you know that there are hundreds of hidden Mickeys at the resorts on property? Take a close look at the detail in the shower curtains, bed sheets, carpets, wallpaper, and everything in-between. Chances are you will see just how intricate the incorporation of our favorite mouse blends within the theming of the resort.