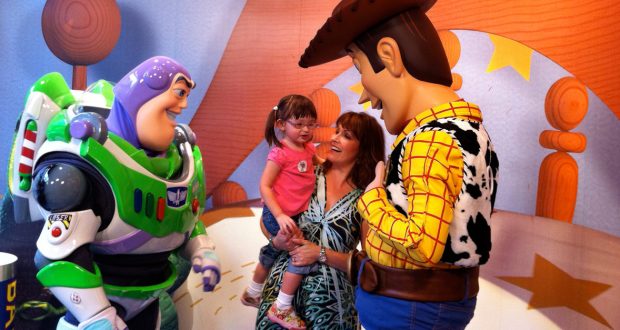 Hollywood Studios is currently under construction and promises to be even more amazing than it already is. The additions of Toy Story Land and Star Wars Land are sure to draw kids of all ages. But as it stands, Hollywood Studios often gets overlooked by parents of small children. Granted, there are very few rides that little ones can do at this park and now even the playground is off-limits. However, if older family members insist on going to Hollywood Studios, there are still plenty of things open that will appeal to pint-sized patrons. Check out these ten appealing little-kid attractions:

10. Disney Jr. Live on Stage – Preschoolers are very familiar with the likes of Jake, Doc, Sophia, and, of course, Mickey and his pals. This interactive show has kids sit story-time style on the ground but gets them dancing and singing as well. Look up for special surprises!

9. Character Greetings – In Animation Courtyard little kids can meet the Disney Jr. stars themselves, usually with very little wait time. Or if they’re not too scared, they can greet Star Wars characters in the Launch Bay. Woody and Buzz are always available too, and Green Army Men are known to roam freely around Pixar Place. Mickey and Minnie have their own spot called Red Carpet Dreams and the other classic pals are scattered around the park. Olaf is currently right around the corner at Celebrity Spotlight.

8. Beauty and the Beast Live – The tale as old as time is told live on stage for every Belle and Beast fan. In true Disney style, this show is full of talented performers, beautiful costumes, and even special effects. My kids like it even better than the movie.

7. Muppet Vision 3D – The wacky Muppets create plenty of chaos in this 3D show. Now that the Muppets are making appearances on Disney Jr., little ones are sure to laugh along with these familiar friends.

6. Frozen Sing Along – For the first time in forever, your little one can sing all their favorite Arendelle tunes along with Elsa, Anna, and Kristoff. It’s a retelling of the Frozen movie with a little bit of a twist. And it’s a great way to cool off!

5. Star Wars Launch Bay – Some preschoolers are unfamiliar with (or too frightened of) Star Wars characters. But the Launch Bay’s movie memorabilia section could still be pretty cool for them. Who doesn’t like seeing space speeders?

3. Hollywood and Vine – Catering to the smallest members is easy at Hollywood and Vine. At breakfast and lunch, they serve a kid-friendly, parent-approved buffet where your child can rub elbows with Disney Jr. favorites. In the evenings, Hollywood and Vine usually hosts special seasonal dinner parties with Minnie and all her friends.

1. Toy Story Mania – Finally, the pinnacle of fun for preschoolers is most definitely the Toy Story Midway Mania ride. Here guests can play a series of carnival-type games with the help of Buzz, Woody, and the gang. Get a Fast Pass EARLY! Since this is really the only little kid ride in Hollywood Studios, Fast Passes go quickly, and the line is always super long.

Have fun with your little ones!