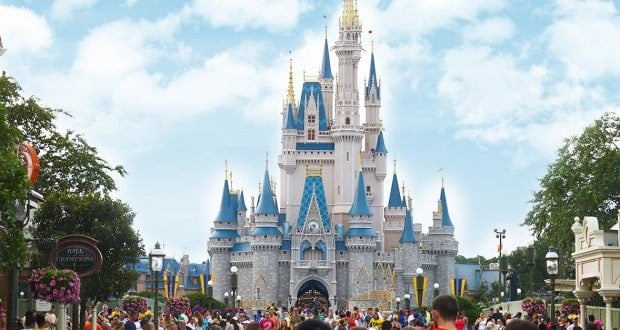 These Will Certainly Get You Thrown Out Of Disney Parks

The happiest place on earth is Walt Disney World’s nickname for a reason. Everything is supposed to be magical and an escape from your everyday life routine. It’s unfortunate though, that there are some circumstances that guests attempt to pull off and end up getting in trouble for it instead. If you ever have an idea that may go wrong, think twice about what may get you revoked from Disney World. Here are ten things that will get you thrown out of the parks.

Disney World is home to millions of animals. Many of these animals are housed in Animal Kingdom. Visitors can come close to wild animals that they wouldn’t usually see in everyday life. Guests are told not to feed any of these animals due to their dietary restrictions. Any guests caught trying to feed animals with regular ‘human’ food will be asked to leave. We don’t want to harm any of these precious creatures, and by feeding them food that they aren’t accustomed to, they can become very ill. (Per Disney regulations, feeding animals also refers to birds and squirrels in the parks)

This seems like an obvious reason, but there are still times where guests try to sneak in weapons whether it’s for their protection or other matters. All guests must pass through metal detectors but that doesn’t stop some guests from trying to beat the system. No matter your personal beliefs in carrying a weapon (even a pocket knife) these items are strictly prohibited at Disney Parks. (Per Disney regulations “weapons” also includes toy guns, blasters, or squirt guns)

8. Portraying Yourself As A Character

There are very strict guidelines with dress codes for “cosplays” at Disney World. Guests may wear themed shirts, makeup, jewelry, or accessories to represent their favorite characters, but absolutely may not dress up exactly like them. Additionally signing autographs or taking pictures with guests while pretending to be an official Disney character is strictly prohibited. These actions are taken very seriously. It could result in being asked to leave before even entering the park, depending on wardrobe. There are now strict guidelines as to what every day clothing guests may wear to the parks as well. For example, wearing a robe is now prohibited! Make sure to check the guidelines before choosing that perfect outfit!

The one thing you can almost always count on when visiting Disney World is having to wait in long lines. No one likes it, but hey, its part of the price you pay for checking out the happiest place on earth. No matter how hard you try, it’s almost inevitable that you will wait in at least one large line for a ride or attraction. Nothing makes guests angrier than people trying to skip the lines. Depending on the severity and escalation of the problem, guests can be kicked out immediately for this behavior.

There are designated smoking areas in all Disney World resorts and theme parks for many reasons. These areas allow smokers to fulfill their cravings while respecting others adverse reactions to smoking.  For some guests, being around smoking could be a life or death scenario. Smoking in other areas could result in a guest being asked to leave the park. Designated smoking spots may be scattered and require a few extra steps. Those extra steps to abiding by the rules are worth it to not have the “walk of shame” leaving the park. (Per Disney regulations “smoking” refers to ANY product that produces a vapor, including but not limited to cigarettes, cigars, and e-cigarettes)

No one wants to see exposure of certain body parts. I know it is hot (most of the time) and you may want to wear shorter shorts or tops, but the truth of the matter is that Walt Disney World is meant to be a family-friendly place for adults and children to enjoy a vacation. It is not acceptable to show too much skin or private parts. Yes, private parts. About two years ago I exited Splash Mountain and dashed to see the ride photo. To my surprise, the young ladies two rows behind me flashed the camera for their candid moment, which meant that I couldn’t’ purchase my photo (for obvious reasons). Needless to say, they were immediately escorted out of the park. This sort of behavior will not be tolerated, and guarantees being kicked out of the park.

There are many reasons as to why some areas are unauthorized and not meant for guests to explore. It can be a huge liability for a guest to injure themselves in a restricted area due to construction or other equipment being present. One known situations on Disney World property was the trespassing in the area formerly known as River Country (by the Fort Wilderness Cabins). A young man decided to sneak past the fences and videotape his findings. He continued to do this in various closed off areas until being located and kicked out. Sneaking in areas like this is a huge no-no and can not only lead to you being removed from the parks and resorts, but it can be a major safety concern if you fall or injure yourself.

Pools are meant for swimming, but did you know that every now and then there are guests who want to take a dip in unconventional places? Fountains, moats, and even the giant lake in the World Showcase at Epcot have all been areas where people have felt the urge to cool off and take a dip. These waters haven’t been properly cleaned for human interaction and may contain unexpected threats. Disney takes toying with this liability very seriously. Anyone found trying to swim around in these areas will be removed from the parks immediately.

This scenario is another one of those unfortunate scenes. Fighting (physically or verbally) can put others in a very uncomfortable position (especially those with small children). It can become quite frightening, especially at Disney World. Physical aggression is not tolerated at the parks. Since it puts others in danger, a provoking guest will definitely be asked to leave. Excessive use of foul language is also a way to get kicked out of the parks.

Many guests have been caught spreading the ashes of loved ones not only around the parks, but on rides, too! Grieving guests may believe spreading the ashes of a family member of friend that was a Disney fanatic at Disney World is the best place for them to ‘lay to rest’. However, there is a lot of sweeping that goes on when the parks close. There is a high probability that the ashes will end up in the trash. Not to mention the discomfort that spreading remains could be to other guests! Anyone caught spreading ashes will be asked to leave immediately.

You may also like: 7 Walt Disney world Experiences We Really Miss