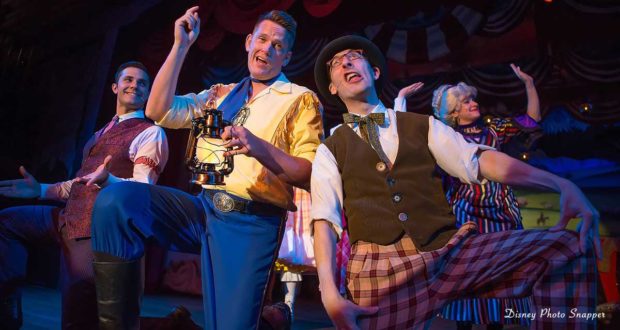 Your Walt Disney World vacation already comes with an innumerable amount of magical experiences included. However, some like to sweeten things even further by taking to certain activities and adventures that come at an additional cost. Here’s a list of 10 such Disney experiences that are all definitely worth the extra money.

Everyone loves watching nighttime fireworks at Disney Parks. It makes the perfect ending to any day, just as dessert makes the perfect ending to any delicious dinner. So why not combine the two experiences and take in one of Disney’s fireworks dessert viewing events? For these extras you will be treated to lavish buffet spreads featuring decadent dessert pickings themed for that park’s particular event. VIP seating for the grand spectacular is also included, of course. You’ll find such offerings available at three of Disney World’s four parks.

At Magic Kingdom there’s the Fireworks Dessert Party at Tomorrowland Terrace with seating available there or at the Plaza Garden. Epcot presents the Frozen Ever After Dessert Party, which takes place at the World Showcase and also offers attendees a private ride on Frozen Ever After in addition to the fireworks, dessert, and VIP seating. Then at Hollywood Studios you can take in the Fantasmic! Dessert & VIP Viewing Experience or Star Wars: A Galactic Spectacular Dessert Party. Also at Magic Kingdom you will find Ferrytale Fireworks: A Sparkling Dessert Cruise. This is a special evening cruising experience along the Seven Seas Lagoon that lets you indulge in scrumptious selections of desserts while enjoying the Nighttime Spectacular. There’s also the special themed Pirates & Pals Fireworks Voyage, which while isn’t a “dessert” pairing per se, does offer a treasure trove of refreshments (at Disney’s Contemporary Resort) prior to your high seas excursion to watch the Nighttime Spectacular.

Throughout the year Disney World plays host to a number of special ticketed events and occasions. And depending on your own personal interests, attending one such happening may very well be worth the extra cost. Mickey’s special holiday happenings, for example, are always fun for kids and adults alike. Between the months of August and October there’s Mickey’s Not-So-Scary Halloween Party. Offered on select nights as a separate ticketed event at Magic Kingdom Park, here you’ll get to experience the lesser-seen gruesome workings of Disney magic. At Mickey’s Very Merry Christmas Party you can indulge in delicious complimentary treats as you enjoy exclusive access to your favorite attractions along with a host of other good tidings, the Once Upon a Christmastime Parade, Mickey’s Most Merriest Celebration, and so many others. It’s a sure way to make the merriest of memories in the most magical place during the most magical time of year.

All around Disney World you’ll discover plenty of behind-the-scenes opportunities to seek out. They come in the form of private tour adventures that allow a select number of people exclusive access into certain areas of a particular park that are not commonly seen. And in most cases, such esoteric adventures are very much worth the added cost. Some examples in the Magic Kingdom include the Disney’s Family Magic Tour, the Magic Behind Our Steam Trains, Walt Disney: Marceline to Magic Kingdom Tour, and the ever popular Keys to the Kingdom Tour.

In Epcot you’ll find such experiences as Behind the Seeds, Epcot Seas Aqua Tour, DiveQuest, Dolphins in Depth, the UnDISCOVERed Future World Tour, and World Showcase: DestiNations Discovered. At Hollywood Studios you and your fellow Jedi companions can take the Star Wars Guided Tour.

Then at Animal Kingdom there’s the famed Wild Africa Trek as well as other excursions, like Caring for Giants. Other popular tours at Disney World are the extensive multi-park experience—Backstage Magic and the Wilderness Back Trail Adventure offered at the Fort Wilderness Area.

Disney World is laden with a seemingly endless array of distinct dining possibilities. Many restaurants around the parks and at various surrounding resorts feature character dining experiences where classic Disney characters come to visit you at your table for meet and greets, autographs, and photos.

There are also a number of special entertainment mealtime events, including ticketed favorites like the Polynesian Village Resort’s Spirit of Aloha Dinner Show and the Hoop-Dee-Doo Musical Revue. You can also take in refined upscale dining around Epcot’s World Showcase, at several onsite resorts and at nearby Disney Springs.

There are also those unique one-on-one experiences like the Dine With An Imagineer offering at the Brown Derby in Hollywood Studios regularly and periodically within other Disney World venues. In truth, the cost of a meal at Disney World can run pretty high, but such experiences are always worth it. Think about the days you will be at the different parks, the members of your party, which dining experiences you plan to pursue, and those must-have snack cravings that may spring up unexpectedly.

There are several places around Walt Disney World where you can be transformed (inside and out) into a whole new you. From the most pampering spa services sure to make you feel like a prince or princess to haircuts and custom styles (including glitter gel and sparkling sprays) at the Harmony Barbershop on Main Street U.S.A., with Disney such experiences far exceed the ordinary.

Even children can delight in the once in a lifetime opportunity to be transformed into something new via a magical makeover. Options vary and may cover hair, makeup, and even attire. There are plenty of options to choose from. While Bibbidi Bobbidi Boutique is perhaps the most well known venue to offer princess transformations to girls aged 3 to 12, there are several other resort salons that also offer what’s known as the Perfectly Prepared Princess Package.

There’s also the Pirates League, which is offered at Adventureland in Disney’s Magic Kingdom for those 3 years of age or older (including adults). Here you can get a full-fledged makeover from a wide range of available packages to become the ultimate scalawag pirate of your own choosing. Other transformations to consider include mermaid makeovers or opportunities to become an empress. Whichever persona you choose, there’s no denying that being all decked out in full Disney style is most definitely worth it.

Different vacationers have different plans. While some may choose to stay for lengthier durations that can easily allow for balancing out one park per day, others may find that they have a limited number of days, but an unlimited enthusiasm for tackling all the parks during their vacation. That’s when purchasing Park Hopper is entirely worth it. With Park Hopper you can spend the morning at Hollywood Studios, take a quick boat ride over to Epcot for lunch or dinner, and then hop aboard the monorail (switching off at the Transportation and Ticket Center) and continue on to the Magic Kingdom for the Nighttime Spectacular—all in a single day!

Even if you don’t think you will be venturing to more than one park in a day, you never know when a last-minute schedule change will reveal a significant must-do happening in another park. So even if it costs a little extra that minor increase should not be significant enough to deter you. Therefore, you can’t go wrong by adding it on when booking your trip.

4. Recreation beyond the Parks

There are plenty of other extras worth pursuing while on vacation at Walt Disney World, some of which take you on a recreational detour away from the Parks. Depending on your group’s interests, it may very much be worth your while to rent out a private boat for a leisurely outing, or perhaps putting away at golf is more your thing.

One of the most popular experience extras for many visitors is purchasing admission to Disney’s two Water Parks—Typhoon Lagoon and Blizzard Beach. In fact, Typhoon Lagoon even holds private surfing lessons onsite with professional instructors. You can sign up for such events in advance. Other unique extras that, depending on your own interests, may be worth spending a little more on are the different activities and happenings around Disney Springs and at Disney’s ESPN Wide World of Sports Complex.

While overpaying on the simple and mundane things, like themed pencils or erasers may be counted as a total waste, there are in fact plenty of novel souvenirs throughout the Disney Resort Area that are so unique, so exclusive that making such purchases would be completely worth spending a little extra on. Many venues within the different parks, hotels, and at Disney Springs boast offerings that are either one-of-a-kind exclusives or rare, harder to find goods.

A great example would be the authentic imported goods sold within the different pavilions of Epcot’s World Showcase. Other unique buys at Disney World include Disney-themed LEGO sets, board games, Monorail mini models, pins, and plenty more, including build-your-own light sabers and droids at Hollywood Studios. You can also purchase personalized or custom-made items like bulbs, glassworks, jewelry, and so many other intricate items. And let’s not forget those classic Mickey Mouse Ears, which come in a variety of different styles and custom choices.

Your vacation memories are priceless, and for that reason adding Memory Maker is worth the price. In fact, it may actually be more economical in the long run to do so, because you will benefit from an unlimited amount of photos taken throughout your vacation at various locations from around the parks, at certain attractions, and even at select dining venues. Rather than purchasing photos taken individually, the Memory Maker option makes things that much easier. It’s also very convenient to access online via a personal account on MyDisneyPhotoPass.com or by accessing the My Disney Experience mobile app.

1. Staying at a Disney Resort

Perhaps the first and foremost Disney experience that’s worth the extra money is staying onsite at a Walt Disney World Resort. While many less-informed vacationers shy away from this notion in an attempt to keep to a budget, the reality is that staying onsite may very well actually end up saving you money. For starters, you don’t have to pay extra on travel, because all Disney World hotels offer complimentary shuttle services to the various parks (with some offering alternate means for travel as well).

Travels between the airport and your resort are also covered by way of Magical Express. Furthermore, Disney World Resorts come in all different distinctions and price ranges to suit any budget. Yet they all offer stellar perks, including onsite amenities, delicious dining options, and extended magical offerings that don’t end even after you leave the parks to head back to your hotel. Guests staying at a Disney World Resort also get to enjoy exclusive benefits like Extra Magic Hours, pickup and delivery services, in-room celebrations, and so much more.

If you find that there is an extra endeavor you wish to pursue while vacationing at Walt Disney World, be sure to make such arrangements early on while booking your trip. Everyone has their own ideas on which extras are worth the added cost based on personal interests and tentative game plans. Just remember any Disney World vacation is magical.

2020-07-04
Laura
Previous: Fantastic Favorite Experiences at Disney Springs
Next: Star Wars: Rise of The Resistance – Boy Are You Going To Love This Ride!