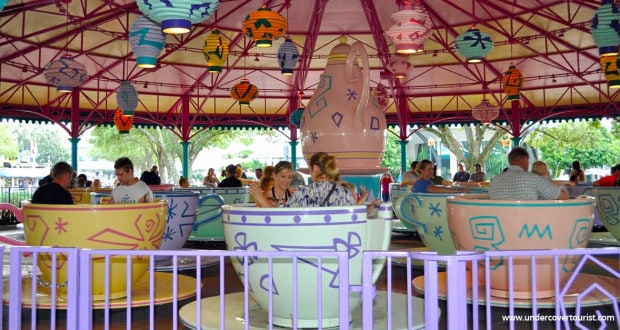 As one of the original rides in both Disneyland and the Magic Kingdom in Disney World, the Mad Tea Party Ride is a sentimental favorite of Disney fanatics both old and young. Children in particular tend to enjoy this ride which features the ability to spin the teacups at whatever speed they like. Most people know that the ride is based on the Mad Hatter’s un-birthday tea party scene from the 1951 Disney animated feature Alice in Wonderland. Here are 10 more wonderful facts about this ride that you might not have known:

1. It Wasn’t Built By Disney

A company based in Mountain View, California called Arrow Development actually did the engineering work, as well as the building and installing, for the Mad Tea Party Ride. In fact, they did the same for five other original rides at Disneyland as well: Casey Jr. Circus Train, Dumbo Flying Elephants, King Arthur Carousel, Mr. Toad’s Wild Ride, and Snow White’s Adventures. Disney’s Imagineering department can’t lay total claim to this iconic ride!

Much as he does in the 1951 animated classic Alice in Wonderland, the Dormouse makes a brief appearance in the Magic Kingdom and Tokyo Disneyland versions of the teacup ride. In those two locations, a large teapot is featured in the center of the ride’s main turntable. The Dormouse periodically pops up out of the top of the teapot. The versions of the ride at the other three parks do not have this teapot.

The version of the Mad Tea Party ride in Disneyland was relocated from behind the castle to its current location in 1983. It originally sat where King Arthur Carrousel sits today, and the carrousel was squeezed into a space between it and the Sleeping Beauty Castle.

The original Mad Tea Party at Disneyland is the only one of the five Disney teacup rides around the globe that currently has no roof and is therefore open to the elements. Excessive amounts of rain cause the ride to be shut down. A roof was added to the Mad Tea Party ride at the Magic Kingdom in 1974 to protect from the extreme weather conditions – both the brutal sun and frequent afternoon rainstorms. The teapot in the center was also added at this time.

In the early history of the original ride at Disneyland, half of the teacups featured no decoration on the outside, which probably did not go over too well with many of the children who preferred a colorful one. Additionally, the teacups did not feature doors as they do today but instead used a rope to close off the entrance to the cup. The rate at which a guest could spin the teacups was slowed after a rider was injured in 2004 when he slipped from a rapidly spinning teacup.

Alice, the White Rabbit, Tweedledee and Tweedledum, and the Mad Hatter can frequently be found in the area around the Mad Tea Party for photos, but are also known to occasionally hop into a teacup with a guest for a ride!

In honor of Disneyland’s 50th anniversary celebration, a gold teacup was added to the Mad Tea Party ride. Perhaps all the other colors on the teacups are in honor of the park’s Un-Anniversary the rest of the time?

Just outside the Mad Tea Party ride is a leaf-shaped plaque imprinted with a quote from Randy Pausch, the Carnegie Mellon University professor who gave a talk entitled “The Last Lecture: Really Achieving Your Childhood Dreams” after learning that he had pancreatic cancer. What is his connection to Disney? Pausch was an Imagineer, consulting for and also working directly with Disney during sabbaticals. He developed a software curriculum called the Alice Project. And the Disney-owned publishing house Hyperion published the book based on Pausch’s speech. The message on the leaf, which was installed in 2009, reads: ““Be good at something, it makes you valuable…Have something to bring to the table, because that will make you more welcome.”

For many guests, the Mad Tea Party ride lives forever on their Must-Do lists whenever they travel to Disneyland or to the Magic Kingdom at Disney World. Others fail to see the nostalgic charm of this ride. Where do you stand?

For more awesome facts about Disney, consider planning and booking your next Disney trip with an Authorized Disney Vacation Planner you can trust like Mickey Travels. They’ll help you get the best price for your vacation, share expert advice and their services are totally FREE! It’s genius!