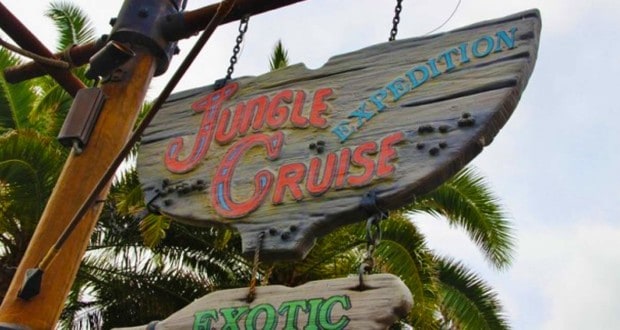 Originally envisioned to capitalize on the success of early Walt Disney nature documentaries like The African Lion, Disneyland’s Adventureland was initially going to feature live animals. When zoologists convinced Walt that live animals would present too many problems to overcome, the land evolved into something a little bit different. Now a fixture of every Disneyland-styled theme park at every Disney Resort around the world, each park’s Adventureland nonetheless has a different interpretation of the original. In the Magic Kingdom at Disney World, there are two “sub-lands” called the Arabian Village and Caribbean Plaza. And while the attractions don’t always hold too steadfastly to those themes, their popularity is a testament to their variety and nostalgic appeal. Here are some of the experiences that you can’t miss in Magic Kingdom’s Adventureland:

Who better to host a meet in greet in the Arabian Village of Adventureland than Aladdin and Princess Jasmine? The stars of the 1992 Disney animated film remain a popular draw, though their friends Genie and Abu are more likely to be spotted during special events like Mickey’s Not So Scary Halloween Party or Mickey’s Very Merry Christmas Party.

Magic Carpets of Aladdin is a Dumbo-style ride in which flying carpets replace flying elephants. Seating is available in two rows per each magic carpet, which allows for more riders per party than Dumbo allows. Riders in the front seat are able to control the height at which their magic carpet flies by using a joystick. Young fans of the Aladdin films will certainly like this ride, and they will in particular enjoy the surprise of having water squirted at them by a large camel. “Watch out, they spit!”

This attraction is admittedly not for everyone. It involves being able to climb over 100 steps to tour a recreation of the treehouse built by the Robinson family in the classic 1960 Disney live-action film Swiss Family Robinson. You can view their living quarters, the crow’s nest, and the jungle lookout that they built in the tree by salvaging parts of their stranded ship. However, when the children in your party are buzzing on a sugar high from their Dole Whips, there’s no better way to have them burn off a little energy than by sending them on a tour of the Swiss Family Treehouse!

9. A Pirate’s Adventure ~ Treasures of the Seven Seas

Similar to the Sorcerers of the Magic Kingdom interactive game, Disney introduced A Pirate’s Adventure ~ Treasures of the Seven Seas in Adventureland in 2013. Using a map and a magic talisman, the members of your party embark on a quest for treasures while eluding Captain Barbossa! Touching your talisman to the appropriate symbol at each location activates narration to guide you on your way, as well as 30 seconds of live-action activity. This is a fun activity to do at any time, but particularly when you’re waiting for a FastPass time or when lines have gotten a bit long on all the rides.

Almost as good as stumbling into Barbossa’s plundered loot on the Isla de Muerta, Pirate’s Bazaar in Adventureland has just about any pirate souvenir you could need – from costumes and eyepatches to pistols and swords. Keep your eyes open for a couple of special items in the shop, including a medallion made from one of the cursed pieces of Aztec gold and the Key to the Dead Man’s Chest.

While it is only open seasonally, and only serves lunch even when it is open, Tortuga Tavern is a favorite of guests who enjoy having this Mexican food option available. Much like Pecos Bill’s Tall Tale Inn and Café – with which it shares seating – the chicken and beef burritos and rice bowl entrees are served plain and guests are invited to visit the toppings bar to finish off their lunch creations. While not quite as extensive as the Pecos Bill toppings bar, this feature allows guests to create the exact entrée that they desire. Tortuga Tavern has a reputation for being somewhat less crowded than Pecos Bill for lunch and for delivering a decent value.

Our favorite pirate of the Caribbean, Captain Jack Sparrow, is recruiting young guests to begin training to become pirates themselves. Learn to fight (or flee) like a pirate, take the oath, and join the crew! A testament to the wonderful face characters that portray Captain Jack, this entertaining, audience-interactive show always draws a fun and festive crowd and occurs several times a day.

If your young scalawag wants to take his or her desire to be a pirate to the next level, this separately-ticketed experience is sure to please! For that matter, The Pirates League is available to guests of all ages. Be transformed into a pirate or mermaid (including makeup), learn to speak like a proper sea dog, and seek the hidden treasure with Captain Jack and his crew. Not only does this experience get rave reviews, you’ll attract attention with your pirate makeover for the rest of the day. But be sure to book early!

The Enchanted Tiki Room attraction retains the Polynesian vibe that was once featured throughout Adventureland. The attraction has changed over the years from its opening in 1971, but was retooled to the original story and soundtrack and re-opened as Walt Disney’s Enchanted Tiki Room in 2011. Said to be one of Walt’s favorite attractions, the original version at Disneyland was the first to use Audio-Animatronic figures. Seek out this attraction to really feel Walt’s presence in the park.

Aloha Isle is home to the delicious, classic Disney treat, the Dole Whip. ‘Nuff said.
(However, those unfamiliar with the Dole Whip must put this item at the top of their next Magic Kingdom to-do list!)

The attraction that was supposed to feature the live animals that Walt had desired in his original Adventureland instead relies on Audio-Animatronics to bring the jungle to life. And where once the soundtrack was semi-serious, it is now delivered in a campy, fun narration by a Cast member. If sight gags and puns make you groan, this ride might not be your cup of tea. But if you’re in the mood to laugh and roll your eyes, Jungle Cruise can’t be beat!

1. Pirates of the Caribbean

A ride that inspired a movie which in turn inspired updates to the ride, Pirates of the Caribbean remains a perennial favorite in all of the Disney parks. That being said, it’s hard to believe that Magic Kingdom initially opened without this attraction and with no intention of including it. Frequent guest comments of “where are the pirates?” made them reconsider and in 1973 Pirates joined the park’s lineup. Updates based on the successful Pirates of the Caribbean film series starring Johnny Depp have served only to increase the ride’s popularity in recent years. So step aboard to enjoy the pillaging and plundering, and remember that dead men tell no tales!

From water rides to musical revues, children’s rides to delicious treats, Adventureland delivers something for everyone and remains a favorite land of many Disney fanatics. Which Adventureland attraction would be your number one?