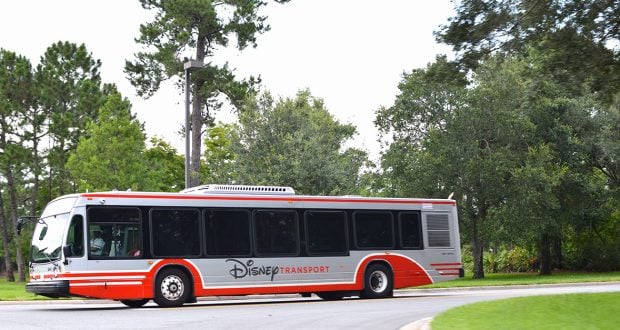 The Walt Disney World Transportation Network is one of the best ways to get around the resort and is taken for granted by most guests – here are 12 fun facts to make your travels around the resort more interesting!

Most people know that one of the reasons Walt wanted to build a second theme park in Orlando was so he could have the space to expand and spread out in a way that would never be possible at Disneyland. As such, even though Magic Kingdom is the east coast version of Disneyland it’s much bigger, with a much larger capacity. This is reflected in the amount of parking available – the entirety of Disneyland could fit into the car park of the Magic Kingdom and still leave room for another 500 cars!

Walt Disney World’s buses are the backbone of the transportation system, providing buses between all parks and to the resort hotels, with a fleet of over 350 buses – making it the third largest bus fleet in Florida, behind that of Miami and Jacksonville.

Opened in 1971 and now with three tracks and twelve trains, since opening the total miles logged by the trains would be enough to make over 30 round trips to the moon!

Walt Disney World has a small fleet of boats for transporting guests to and from a select number of resort hotels and parks, including three ferries that travel between the Transportation and Ticket Centre and the Magic Kingdom – which are named after past Disney executives. When added to the other boats operated by Disney, their fleet comes to an impressive total of 750, reportedly making it the world’s fifth largest navy.

Crucial to getting around Walt Disney World are the vast network of roads which serve the parks, resorts and other amenities, as well as many smaller backstage roads. What many visitors will miss are the variety of names given to these roads – some have obvious origin, such as ‘Dopey Drive’ or ‘World Drive’ but others are not so instantly recognisable; amongst these are ‘Sherberth Road’ and the ‘Irlo Bronson Memorial Highway’, which pay tribute to the landowners who sold their land (or part of) to Disney for his ‘Florida Project’, and without whom we might not have the parks as we know them today!

The WDW transport system carries masses of people each day, with 150,000 people using the monorails alone – making it one of the busiest monorail systems in the world.

Many people fly into one of Orlando’s airports to begin their trip to the Happiest Place on Earth, so much so that Disney provide a bus to take guests from the airports to their resort hotels – Disney’s Magical Express. However, unlike the buses to the parks, this is provided by a private company working for Disney on account that Disney buses are not allowed to carry passengers outside of Disney property.

Have you ever noticed that all the areas of the parking lots have names relevant to the park you’re visiting? Hidden amongst these is a clue to the Animal Kingdom land that never was, with the ‘Unicorn’ parking area being a remnant of the original plans to include a ‘Beastly Kingdom’ full of mythical creatures in the park (also hence the dragon on the logo!). The place in the park that this land was to have occupied is now in the process of becoming Pandora (or Avatar-land).

Water bridges are pretty uncommon things, allowing a body of water to continue over a road. Walt Disney World is home to three of them! The most visible one can be seen by catching a ferry between Magic Kingdom and Fort Wilderness. The other two are in the Epcot area and only easily visible from backstage areas.

The symbol of Epcot, the giant golf ball which houses Spaceship: Earth is made up of 11,324 triangles. No big deal? Epcot’s parking lot also contains 11,324 parking spaces! Coincidence or a clever Imagineer – you decide!

Rumor has it that the route the monorail takes through Epcot was decided not by the Imagineers, but by the swampy ground upon which the parks are built, with their originally planned route being made impossible due to the swampland – hence the monorails go through the park before finally reaching the station. There are also rumours that World Showcase and Futureland were going to have a monorail station each, allowing them to be run as separate parts – another plan foiled by the swamps of Florida!

Did you know that once upon a time you could fly straight to Disney? A small regional airport exists and is still visible from the monorail and when driving to the Transportation and Ticket Centre. Grooves on the runway were used to surprise passengers, playing ‘When You Wish Upon A Star’ when driven over at around 45mph. The airport was closed by the 1980s and will likely never be reopened due to the expansion of the monorail track in the 1980s and a no-fly zone which has been in place since 2003.