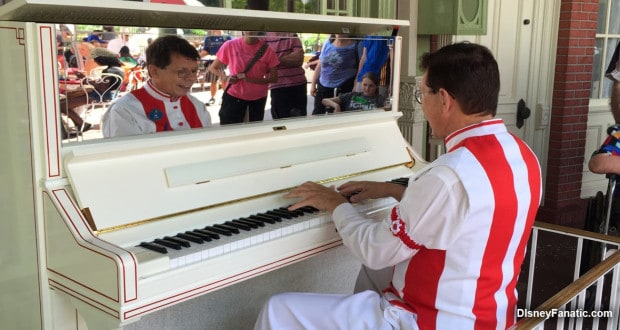 With a limited amount of time available and a significant amount of money invested in their vacations, it’s perhaps easy to understand why so many Disney World guests rush from ride to ride during their visits to the park. The most unfortunate thing about this mad dash around the theme parks to get “their money’s worth” however, is that the guests end up missing out on so much. They overlook the incredible environments and amazing ambiance that Disney has created. And they wouldn’t dream of wasting time by simply sitting in one place and enjoying one of my favorite activities – people-watching. But perhaps most tragic of all is that they miss out on one of the best “attractions” that Disney has to offer – the incredible performers that can be found all over the parks. Here are a baker’s dozen of our favorites:

Cinderella’s royal advisors can be found in Fantasyland at the Magic Kingdom. These performers in medieval garb, with pipe and drum musical accompaniment, lead guests in games, dancing, and “lessons in aristocracy”. A favorite of young children, they often perform just across from Princess Fairytale Hall. Leave Dad in line to hold your place for Anna and Elsa and head over for some quick fun with the Royal Majesty Makers.

The constant whistle blowing by one of the members of this duo found in the French Pavilion of Epcot’s World Showcase is nearly enough to drop them off of this list. But then they start to assemble their tower. Starting with a chair perched on top of four wine bottles, the acrobatic member of this duo builds a tower by alternately inverting and placing chairs atop each other while simultaneously climbing it. It is an impressive display of balance and agility, combined with an amusing show.

Based in the Magic Kingdom’s Frontierland, this trio of cowboys leads the crowd with a performance of Disney songs and other music using two banjos and a sousaphone, a kind of tuba. That’s right, banjos. And a tuba. You’re welcome.

There might not be a more colorful and lively group of musicians on this list than the Viva Gaia Street Band, found at Disney’s Animal Kingdom in Discovery Island. Wearing colorful outfits and constantly encouraging audience interaction, they play a variety of dance music to get you up on your feet, swaying to the beat!

Located in the Africa section of Disney’s Animal Kingdom, the musical group Burudika delivers “Afro-pop” versions of classic hits like “You Can Call Me Al” and “Iko Iko”, African rhythms, and the occasional Lion King song. Their lively performances are sure to please anyone waiting for their safari fast pass time.

If you’ve got a taste for exotic-sounding music, be sure to catch Chakranadi in the Asia section of Disney’s Animal Kingdom. They are a sitar and tabla duo that performs classic Indian music with colorful flair. Their music really brings the village of Anandapur to life for guests.

This crew of musicians in Future World East at Epcot initially appear to be part of the custodial or maintenance departments at the park. But then the real show begins. Using a combination of trash cans and buckets, or power tools and tool boxes, the JAMMitors perform a fun and frenzied percussion routine that is always a crowd-pleaser. Other items pulled into service as musical instruments can include power tools, saws, and crowbars!

Another group that displays great prowess in percussion are the Tam Tam Drummers of Harambe. Using traditional African drums and other percussive instruments such as rakatak, agogô, and ahoko, the Tam Tam Drummers lead the crowd in a lively performance that encourages interaction and even a little embarrassment! You’ll find them in the Africa section of Disney’s Animal Kingdom.

Wrapping up the trio of drum performers on this list is Epcot’s Matsuriza, a group of percussionists that use large traditional Japanese taiko drums. Performing at the base of the pagoda in the Japan pavilion, Matsuriza puts on an impressive display of drumming that is steeped in traditional pomp and flair.

While you’re in the America pavilion at Epcot, be sure to catch the a cappella group Voices of Liberty in the rotunda of The American Adventure. They deliver an amazing performance of patriotic American music in a remarkable acoustic setting. Although they do lose points on my list for giving in to Frozen mania and adding “Let It Go” to their repertoire, their patriotic music can raise goosebumps on your arms.

In just under 20 minutes, the Jeweled Dragon Acrobats in the China pavilion at Epcot deliver what feels like an evenings’ worth of entertainment. From the festive Chinese dragon and flag wavers that kick off the performance to the strength and balance displayed by the acrobats, this varied and exceptional performance sometimes seems to mesmerize the crowd into silence, though the applause follows soon enough.

Just go to the end of Main Street U.S.A. and take a left to catch a tradition that started decades ago in the Magic Kingdom. A must-see for many Disney World return visitors, the Casey’s Corner Pianist performs everything from songs dating back to the turn of the 19th century to Disney favorites. Additionally, he has been known to let audience members sit down to show off their own talent on the piano. So if you’ve been known to tickle the ivories, brush up on your skill before your next visit to the Magic Kingdom!

Another Magic Kingdom treat that started decades ago, The Dapper Dans are synonymous with the Main Street U.S.A. area where they perform. This barbershop quartet weaves humor, tap dancing, and organ chime playing into their singing performances, and seem to have the ability to stop people in their tracks to watch. They also receive bonus points for their performances during the Halloween season as the “Cadaver Dans.”

Disney performers are vital to the parks for a number of reasons, including adding authenticity to certain areas, creating fun, and providing entertainment between attractions. Which performer in the Disney parks are you unable to pass without stopping to watch?