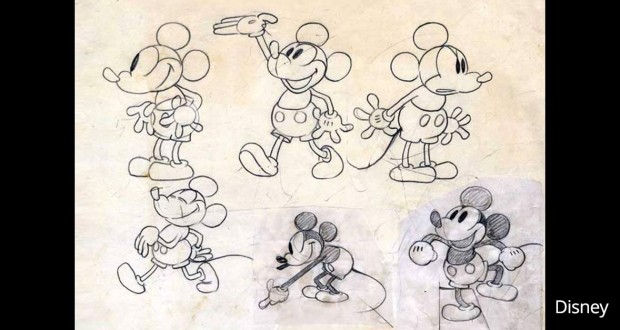 Some of us grew up with Mickey Mouse in the days of black and white TV, and then watched in color and advanced animation. He is still just as endearing as he was in his infancy. Fame doesn’t seem to have turned his head, even though he has become a billionaire entrepreneur and famous celebrity! He has stayed true to his one and only love, Minnie, his best friend Goofy, and his pet dog Pluto. He has kept his audience both young and old throughout more than eight decades and continues to make us smile into the twenty first century.

“I only hope that we never lose sight of one thing – that it was all started by a mouse.”

1. In 1925, Hugh Harman drew sketches of mice around a photo of Walt Disney on Disney’s desk at the Laugh-O-Gram Studio in Kansas City, MO.

2. Ub Iwerks, Walt’s friend and co-animator, was inspired by the photo to create a new character for Disney. Walt and Ub created the would be famous mouse by 1928 at the Walt Disney Studios.

3. Irwerks first drew Mickey’s body out of circles to make the character simple to animate.

4. “ Mortimer” was the character’s name until Lillian Disney, Walt’s wife, thinking it to be too pompous, renamed him “Mickey Mouse”.

5. Mickey’s body into more of a pear shape. Liking this new design, Walt told Moore, “that’s the way I want Mickey to be drawn from now on”.

6. Indisputably, Mickey” ears are his most recognizable feature. Known the world over, Mickey’s ears appear circular no matter which way he faces. These are probably the most famous set of ears ever, and are a trademark of the Walt Disney Company.

7. Then there are Mickey’s hands, each with, not five, but three fingers and the thumb. Walt said three fingers was both an artistic and a financial decision. Five fingers would “look like a bunch of bananas”. Financially, one less finger saved millions by not having to draw it in each of the 45,000 drawings that go into making just six and one half minutes of a cartoon!

8. By 1929 , Mickey sported white gloved hands that needed to be contrasted with his black body.

9. For seven years, Mickey was only seen in black and white, but he was always drawn wearing the red shorts with two large buttons. His yellow shoes complete the original outfit. When dressed in different outfits, Mickey most often wears red clothing.

11. Mickey officially debuted in the short film Steamboat Willie (1928), one of the first sound cartoons.

13. Ten of Mickey’s cartoons were nominated for the Academy Award for Best Animated Short Film. Lend a Paw, won the award in 1942.

14. In 1978, Mickey became the first cartoon character to have a star on the Hollywood Walk of Fame.

We Love You Mickey!