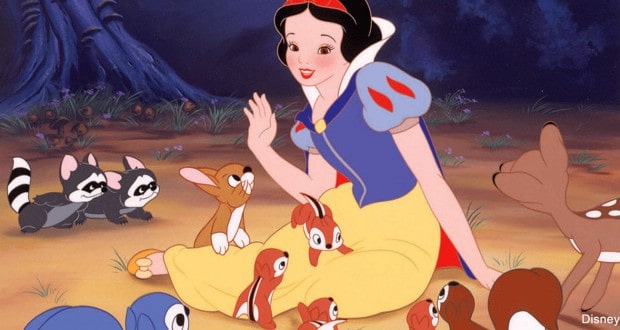 When something is great there could be a certain amount of luck involved. However, when it comes to a Disney production, one man’s vision and a staff with artistic skills on the genius level made the now billion dollar dream come true! Such is the case of Snow White and the Seven Dwarfs. Below are facts that will treat you to the amazing turning point for the world of animation and the incredible power launch of the Walt Disney empire.

Disney chose this particular story to be his first full length feature as he envisioned the combination of an enduring story plot, the lovable characters of seven dwarfs, and all the possible forest animation. Now, Snow White and the Seven Dwarfs is over 75 years old and takes its place as a classic in film history. This first full length animated film by Walt Disney Pictures and Walt Disney Productions premiered at Hollywood’s Carthay Circle Theater on December 21, 1937. (It was attended by Hollywood stars from Marlene Dietrich to Donald Duck). RKO Radio Pictures released the film in theaters the following February. This groundbreaking film depicts Walt Disney’s vision and the genius of his artistic staff. With Snow White, a new American art form was created.

In addition to being the world’s first full length feature film in animation, it was the first one in English, first in Technicolor, and the first one produced in the United States. The multi-plane camera, which gives animation an illusion of depth, saw its first major use in this film. (It had been used previously in “The Old Mill”).

Along with countless production staff, the dedicated artists included: 32 animators with 1032 assistants, 107 inbetweeners, 10 layout artists, 25 background artists, 65 special effects animators, and 158 inkers and painters. This is how many people it takes to create a masterpiece.

The film grossed $8.5 million during its initial release, making it the biggest moneymaker in Hollywood history until “Gone With the Wind” beat the record in 1939. Snow White and the Seven Dwarfs was so successful that Disney used these profits as his opportunity to build a studio on 57 acres in Burbank, California, specifically designed for animation. The studio remains there to this day.

This film drew worldwide acclaim, winning several prestigious awards. Among them was the Grand Biennale Art Trophy from the Venice Film Festival and special awards from the New York Critics Circle and The Academy of Motion Pictures Arts and Sciences.

There was also an honorary custom-made Oscar with the standard Oscar statuette and seven small statuettes that represented the seven dwarfs. Young Shirley temple was the presenter of the Oscar.

Continuing to receive accolades, Snow White and the Seven Dwarfs was one of the first 25 films chosen to be preserved in the Library of Congress’ National Film Registry in 1989. The American Film Institute in 2008 named it the Greatest Animated Film of All Time!

Walt Disney Pictures has re-released “Snow White” in theaters at least nine times. It has earned some $185 million in theaters. Some say that when adjusted for inflation, that makes it the tenth highest-grossing movie of all time. That would make you “whistle while you work”!

Decades ago Walt Disney Studios established the foundation on which all other animated films would build. Disney always sets the bar high, and with vision, vivid storytelling, imagination, and skilled artistry, the world has continued to be amazed at the innovation with which Walt Disney Studios continues to produce films that become family favorites.