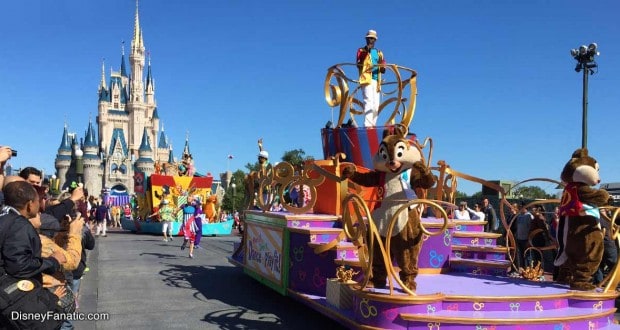 Parades are a great way to take a break from all of the hustle and bustle of visiting the Walt Disney World Park. You can have a seat, eat a tasty snack, and enjoy the music and “dancing” floats as they stroll by with your beloved characters. While there are many parades at the happiest place on earth, these three at Disney’s Magic Kingdom are a must see on your next trip!

There is no doubt about it that Disney is unique. Their holiday and special event parades are no exception! There are two specific holiday parades that stand out amongst the others, and since they are both amazing, I couldn’t pick just one! In late September the Magic Kingdom transforms into a beautiful fall fairyland for the prevalent hard ticket event, Mickey’s Not-So-Scary Halloween Party. During this event, you can watch the most exclusive Halloween parade on property! Watching the Boo-To-You parade is by far my favorite out of every parade I have ever seen at Walt Disney World. This pageant starts off with the headless horseman and includes some fearsome floats, Disney characters dressed in their Halloween costumes, and my favorite of all, the gravediggers from the haunted mansion. This pageant is appropriate for all ages since it is truly delightful! After Halloween, Christmas decorations are put up and the Magic Kingdom transforms into a holiday wonderland for the very popular hard ticket event, Mickey’s Very Merry Christmas Party. During this magnificent holiday spectacular, you will witness one of the most festive processions, Mickey’s Once Upon a Christmastime Parade! Here, Disney friends are dressed in their holiday best and celebrate with gingerbread men, elves, Christmas dancers and are infused with breathtaking floats, lights, and of course, classic holiday music. This parade is also very unique because it includes characters that aren’t seen on regular visits like Jiminy Cricket, Scrooge McDuck, and of course, Santa himself!

In order to watch any of these two parades, you will need to purchase tickets to the hard ticket events. There are also two showings (and no fastpasses) for these parades, so I recommend you attend the second one, since the first one tends to be more crowded.

The most classic parade on Walt Disney World property is the Main Street Electrical Parade. This parade debuted in 1977 and while it was removed for the SpectroMagic parade, it was brought back to Disney World to replace it and delight guests again. This parade takes place twice in the evenings at Magic Kingdom with half a million glowing lights from each float as it makes it’s way through Main Street U.S.A. A unique (and memorable) soundtrack of instrumental music that portrays classic Disney films is portrayed with each glowing float! I really love this soundtrack because it is so recognizable when heard anywhere! What really amazed me when I first viewed this parade was that not only were the floats completely covered in lights, but the characters are as well! I was amazed to see the costuming and hair include twinkling lights to add to the theme of the parade! There are some unique characters in this parade that aren’t seen frequently, like Elliott the dragon and Pinocchio, and some classic ones as well, like Cinderella and Snow White. Fastpass+ is available for this parade. I also recommend seeing the second parade (if a second one is on the schedule) since the first parade typically attracts guests first. The second showing is usually less crowded.

The Festival of Fantasy Parade is the newest parade at Walt Disney World and it is a must-do on your next Disney trip. This parade takes place in the middle of the afternoon and pays tribute to the characters and storylines in Fantasyland. The difference between this parade and all of the others is its modern twist on the characters and floats. The vibrant colors and performers offer a very playful concept and art unlike any other show or parade. There are state of the art floats and costumes with performers on stilts and swings. The original music from classic Disney films will also have you dancing to the beat! My personal favorite is the Maleficent steampunk dragon float. This float actually shoots out real fire as it towers over the guests! A few of the characters in the parade include Peter Pan and his friends, Ariel, Rapunzel, Merida, Cinderella, Tiana, Belle & Beast, Anna and Elsa and of course, Mickey and Minnie! This parade is appropriate for all ages and offers a Fastpass+ option, which is a great way to guarantee a spot for the show since it gets filled quickly. There is only one parade daily, so be sure to add it to your plans!