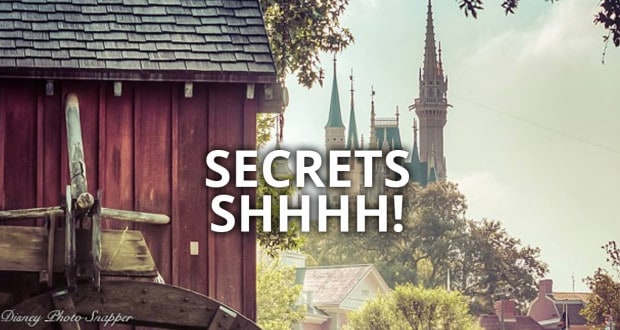 Walt Disney World was developed with full attention to detail. There is a plethora of magic no matter what park you visit or what resort you stay in. There are also several ‘secrets’ or fun facts that true Disney fanatics know about. While some fans know bits and pieces of information, there are some secrets/fun facts that will make guests jaw drop. Here are six secrets most people may not be familiar with in the Magic Kingdom.

The iconic entrance to the Magic Kingdom is built and decorated in true American fashion. What some may not know is that since Walt loved his hometown of Marceline, Missouri so much, he wanted to make sure that Main Street U.S.A. resembled the town that was near and dear to his heart. Along this iconic entrance, you will see several U.S. flags lined up on the tops of the facades. These flags actually aren’t real! They are all missing a star or a stripe. This is because the flags are actually meant to be lightning rods and since the U.S. Flag Code only permits flags to be flown outdoors from sunrise to sunset, these flags wouldn’t abide by the code. The facades down Main Street were also built high up so that they cover other areas (like Tomorrowland and Adventureland) to make guests feel like they are truly in one place.

Adventureland is one of the most popular lands at the Magic Kingdom. The tropical landscape and exotic attractions and cuisine will take you to another world. While there are many more areas and attractions to enjoy, Pirates of the Caribbean is one of the most popular rides in the park. Johnny Depp, the award-winning actor that plays Jack Sparrow in the Pirates of the Caribbean films, plays a huge roll in the refurbishment of this ride. When Depp got wind that Disney was adding an audio-animatronic of Jack Sparrow to the Pirate of the Caribbean ride, he immediately contacted the company and took over the refurbishment. Depp even had a mold made of his face and recorded the lines that Jack Sparrow says in the ride! He wanted the robot to be absolutely identical to his favorite role.

Welcome to the great outdoors! Frontierland will bring you right into the wilderness and will make you feel like you’re in another world. The buildings in Frontierland all resemble historical architecture. You can tell the time frame each building represents because the year is located right above the doors. You will also notice raised wooden sidewalks on many of the buildings front porches. These were very common in the wild west to keep skirts clean and away from the common dirt roads.

Another historical land is Liberty Square. This area pays tribute to colonial America (1700s & 1800s) and has many small details that are very interesting. There is a massive tree known as the Origins of Liberty Tree. This 135-year-old tree was actually transported to Liberty Square from another area on Disney property to create their very own liberty tree, just like the one that was used by the Sons of Liberty to hang lanterns that showed their solidarity. This 35-ton tree flourished beautifully and now has thirteen lanterns, one for each colony, hanging proudly on its branches. Beneath this beautiful tree, is a replica of the Liberty Bell. This replica was actually made in France and was casted with the same mold as the original bell. The walkways of Liberty Square are unique as well. You will find baths of brown-pebbled stone walkways sandwiched by red flooring all throughout this land. The red flooring is supposed to resemble mud (which was common back in these days) and the brown pebbled walkways represent the sewage thrown out onto the streets during this time period. This is why you will have to travel to another land in the park to use a restroom, because they didn’t have any toilets back then!

This beloved land is amongst the most popular for the little ones. There are several hidden ‘secrets’ in this one of a kind land. To begin with, The Many Adventures of Winnie The Pooh was added to Fantasyland about 15 years ago, replacing Mr. Toad’s Wild Ride. While the classic ride may be gone, Mr. Toad still has a presence in the park. While riding The Many Adventures of Winnie The Pooh, glance over at Owl’s house immediately upon entering. You will see a picture of Mr. Toad handing over the deed of the ride to Owl. The giant tree that is in front of the Many Adventures of Winnie the Pooh is also a tribute to 20,000 Leagues Under The Sea, another classic ride (which was replaced by Under The Sea: Journey of the Little Mermaid) in fantasyland. The arch of the tree has a carving of the nautilus from the film. There is another great historical tribute to 20,000 Leagues Under The Sea by Journey of The Little Mermaid. The Disney Vacation Club kiosk just outside the ride has an intricate sign with the name H. Goff Cartographer. What people don’t know is that this was one of animators on the film and eventually, he became an Imagineer and sketched out the ride for Disneyland. Speaking of Journey of the Little Mermaid, if you look at the rick formation by the exit ramp, there is a hidden mickey in the actual rock formation. Look closely, because it isn’t your typical hidden Mickey. This hidden Mickey is an image of Steamboat Willie.

The futuristic land in the Magic Kingdom is Tomorrowland. Here, guests can enjoy some out-of-this-world attractions that mostly incorporate space themes. One of the most popular rides is Buzz Lightyear’s Space Ranger Spin. When looking inside the gift shop (at the exit of the ride), you will see a giant mural above that includes a rocket ship, which actually belongs to Stitch! Speaking of Stitch, when visiting Stitch’s Great Escape, be sure to look out for a sign that reads X-S. This is a reference to the attraction that Stitch replaces, exraTERRORestrial. In this attraction, guests used to watch a demonstration from a company named X-S. The letters were never removed.

Another cool secret in Tomorrowland is on the Tomorrowland Transit Authority Peoplemover. While enjoying this relaxing ride, you will hear the intercom paging ‘Mr. Tom Morrow’. This may sound like a coincidence, but Mr. Tom Morrow was actually the host of Innoventions in Epcot. While riding the Peoplemover you will also see a beautiful model of Progress City. This model was actually created by Walt Disney himself and was intended to be used for his Epcot project.