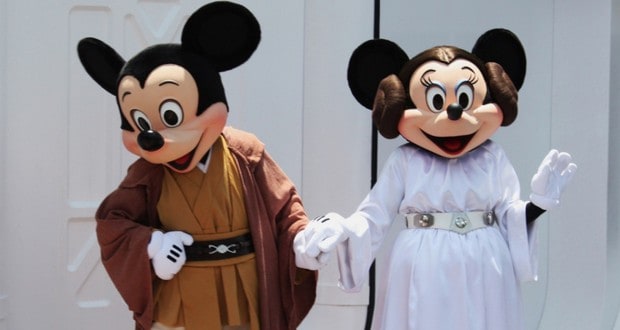 When Disney partnered with Lucas Films in 2012, you knew this attraction was going to get hit with a long overdue facelift. From the pre-ride queue until the epic conclusion, Star Wars fans will notice cameos from their favorite characters throughout the experience. Guests will soar to a galaxy far, far away in the Starspeeder 1000 while rocking a set of 3-D glasses avoiding droids and the ruthless Darth Vader. Imagineers did a stellar job of marrying the magic of Disney and nostalgia George Lucas created almost forty years ago. This is a must ride for any thrill seeker and Star Wars fanatic. No Disney attraction is complete without a few secret tidbits thrown in by the Imagineers.

1) 54 is more Than Just a Number – Much like the neighboring Tower of Terror, Star Tours alters the ride experience repeatedly. The Tower of Terror has around a dozen or so ride sequences. Star Tours has more than four and a half times that with FIFTY FOUR different experiences. This is just another way Imagineers enhance the guest experience making no two rides alike.

2) Ewok Party – If you listen closely in the queue area, you can hear the Ewoks having a little party with their campfires lit in the forest. This design was loosely based on the 1983 Star Wars Episode VI: Return of the Jedi. For those who are big Star Wars fans, think back to the Battle of Endor.

3) Pee Wee Appearance – I was as shocked as any to hear this one, but Paul Reubens (a.k.a. Pee Wee Herman) actually did the voice of Captain RX-24 (Rex) on a version of the Star Tours attraction. He played the pilot of the ship talks to the guests as R2-D2 is loaded into the spacecraft. Being the captain of a spaceship is a massive jump in responsibility over running the show at Pee Wee’s Playhouse.

4) Jedi Training – Though an authentic light saber may be tough to come by, little ones can enter a Jedi Training class a few times daily in front of Star Tours. Children have the opportunity to train with their own Obi-Wan-Kanobi and become a certified Jedi! Not only is this a good way to kill some time waiting for your next FastPass, but how often can your child actually become a true life Jedi!

5) George Lucas Tribute – The Imagineers decided to give a little tribute to director George Lucas and his majestic film series just before boarding the spaceship. If you listen closely, you will hear a reference to THX1138, which was in all of the Star Wars movies. Also, they page an imaginary person Egroeg Sacul. Can you figure out what or whom that is?

6) Other Disney World Guests – One thing Disney constantly does is recycle artifacts from other attractions. All through this ride you will notice different characters that may seem out of place for Star Wars. There is a Hidden Kermit (not a hidden Mickey) while waiting in line near the loading zone. Also, once leaving you’ll see the two buzzard type birds that strongly resemble the ones before the big drop on Splash Mountain.

Star Tours is a pretty intense motion simulated ride, so it isn’t for the faint of heart. You do rotate a decent amount and may be a bit much for folks who experience motion sickness. However, if you are a fan of the movie I recommend giving it a shot and sitting in the center of the spaceship (it has the least amount of rotation). Cast members can typically accommodate a request like that. With so many different scenarios from the pre-ride queue and experiences, guests can really take advantage of everything this attraction has to offer. There are minimal wait times, unless it is Star Wars weekend where the waits are typically much higher. May the Force Be With You as you journey to a galaxy far, far away.