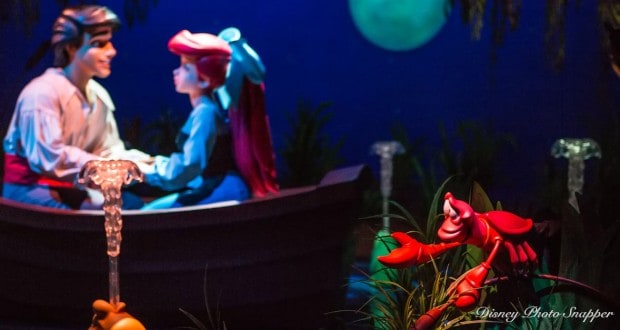 By now it’s safe to say that the Disney Imagineers know that Disney fanatics like us anticipate their newest projects and ventures with bated breath. We’ve learned that there is always so much more to an attraction than what you see on the surface. The Imagineers never leave a stone unturned; every ride and attraction is designed with careful precision and includes intricate details that always have me saying with deep fascination, “Yep! They’ve done it again!” As one of the newest attractions on Disney World property, Under the Sea-Journey of the Little Mermaid is more than a simple clam-shell ride through Ariel’s domain. Located in the New Fantasyland section of Magic Kingdom, this attraction has riders “descending” under the sea, their clamshell vehicle running along a continuously moving track as they experience vibrant scenes retelling the story of The Little Mermaid. With an intensely creative and immersive queue, fun “hidden” design details, and an entire cast of colorful audio-animatronics, this attraction really brings to life one of the most beloved classic Disney movies, guaranteeing you’ll feel part of Ariel’s world (and might even be singing her anthem the rest of the day, too)! Here are 7 fun facts about the Under the Sea-Journey of the Little Mermaid attraction in Magic Kingdom.

7. A Nod to a Former Disney Attraction

Did you know that this attraction rests atop the site once home to a previously beloved attraction with a very similar name? The former tenant, 20,000 Leagues Under the Sea, oohed and ahhed park goers for decades until its final submarine voyage in 1994. As huge fans of Disney history, the Imagineers wanted to pay homage to this classic ride by implementing details that true lovers of this long-gone attraction would recognize and appreciate. Look closely as you wind through the queue of rock formations before you go inside—an imprint of the Nautilus submarine can be seen on one of the massive rocks. Another fun tidbit relating back to the 20,000 Leagues attraction: Before the attraction was dismantled, Disney Imagineers bottled up some of the attraction water, carefully labeling and storing these sealed containers inside their Florida headquarters for the last 18 years. During an official event held at the Under the Sea ride’s opening, the bottles were opened and ceremoniously poured into Ariel’s waters, returning a piece of the past to New Fantasyland!

Let’s face it: waiting in long lines is a drag. I don’t know too many folks who look at an estimated Disney attraction wait time and happily exclaims, “Alright! A two-hour wait!” Because of the long-line dilemma at Disney, the Imagineers wanted to create a queue that kept the waiting riders happy and distracted—all but forgetting that they were standing in a line. The Under the Sea interactive queue has people buzzing almost as much as the ride itself. The winding path of the queue eventually takes guests into dark caverns, engaging them in a game of seek and find in Scuttle’s Scavenger Hunt. During this interactive portion of the queue, guests can help an animated blue crab sort out Ariel’s whosits and whatsits among piles of thingamabobs. As guests use their finger to point out the objects that don’t belong in Ariel’s stash, the crabs will listen and remove the selected item from the pile. Moving along the line, guests will eventually find themselves in front of an Audio-Animatronic version of Scuttle, who happily chats with them and shows them the objects the crabs have collected during the pointing game.

The attraction experience is approximately 5½ minutes from the time guests board the clamshell to the time they exit the clamshell. It doesn’t seem like a long span of time for a ride, but it’s actually twice as long as Peter Pan’s Flight (2 minutes 45 seconds). And trust us, there is a whole lot of whimsical fun packed into those 5½ minutes.

The Under the Sea attraction is, currently, one of the few rides that have an attached character meet and greet area. At Ariel’s Grotto, Ariel herself sits inside a beautiful and colorful cavern waiting to meet and take pics with her adoring fans. There is a new(ish) trend at Disney that has the Imagineers designing adjoining meet and greet sections for the attraction’s main characters. You can find Winnie the Pooh and Tigger in a Hundred Acre Wood themed picture spot right next to The Many Adventures of Winnie the Pooh ride (inside Magic Kingdom). Also, once completed, the new Frozen attraction which will be located inside Epcot’s Norway Pavilion will feature an attached meet and greet building housing Anna and Elsa.

Those who have visited Disney’s California Adventure might find themselves having a major case of déjà vu as they move through Ariel’s underwater world inside Magic Kingdom. That’s because this ride is practically an exact replica of The Little Mermaid: Ariel’s Undersea Adventure attraction at the California-based theme park, which opened in 2011 (a year before the Magic Kingdom’s version).

As your slow-moving clamshell takes you on your undersea journey, your eyes will have plenty to take in. Before you board your vehicle, you’ll be treated to an 86-foot long, hand painted mural in the loading area, depicting Ariel at dusk. As your clam takes you through the different scenes, I wouldn’t even attempt to count the characters all around you. There are 183 of them in this attraction, more than 70 percent (128 to be exact) of these characters featured in the Under the Sea musical scene alone. The grandiose and foreboding Ursula is larger than life at 7 ½ feet tall and 12 feet wide (with those endless tentacles of hers). There are also more than 20,000 live and artificial plants decorating the attraction, both inside and out.

For all of you who pride yourselves on discovering Hidden Mickey’s throughout Disney property, you’ll find quite a few in this attraction. Pay close attention to the spotted skin of the colorful frogs inside this ride. The famous Mouse Ears are also peppered amid the rocks that border the attraction queue. If you’re taking count, there are precisely seven different Hidden Mickey locations here. By far the most impressive Hidden Mickey (not included in the previous lines count) can only be witnessed on Mickey’s birthday, November18th. The Imagineers carved part of the rock formation in the Under the Sea attraction queue to allow the sun to shine through onto a dark rock wall. On Mickey’s birthday at noon, the sun’s rays are at the perfect angle to form Mickey’s three-circle head. This phenomenon can be seen for only 7 or so minutes, making it a much coveted photo opportunity for us Disney fanatics.

– 9 Amazing Facts About The Hidden Mickeys at Disney World

Fantasyland Journey of the Little Mermaid 2015-01-28
Kelly B