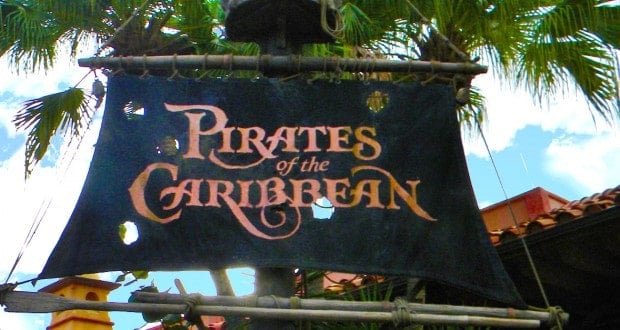 8 Facts About The Pirates of the Caribbean Ride That’ll Have You Saying, ‘Yo-GO!’

At almost every Disney Park you can unleash your inner buccaneer and take a swashbuckling voyage through murky waters and towns raided by treasure seeking pirates, catching a few glimpses of the dreadlocked and bumbling Jack Sparrow along the way. This beloved attraction which inspired the Pirates of the Caribbean movies—which, in turn, inspired the attraction—has been a guest favorite since the original Disneyland inception opened in 1967. We ALL know how awesome this attraction is, but thar might be some things that ye landlocked landlubbers did not know. For instance, did you know that it was the last attraction that Walt Disney oversaw, officially opening just three months after his death? Or did you know that the original vision for this boat ride was to be a walk-through wax museum? These are just a couple of the dozens upon dozens of interesting facts and tidbits surrounding this popular attraction. Let’s take a look at 8 more of them that’ll have you saying, “Yo-GO!”

The more I looked into Disney Parks history and the more I paid attention to the rides themselves, I realized that Disney had a penchant for re-using so many of the same people to lend their voices to some of the most popular theme park rides and attractions as well as animated Disney classics. For example, some of these great pirate voices and townsfolk are the unmistakably familiar talents of Paul Frees and Thurl Ravenscroft. If those names don’t ring a bell, then let me enlighten you on some of their credited work. Paul Frees, whose voice is heard as several of the audio-animatronic pirates, including the Auctioneer, also voices the eerily famous, “Dead Men Tell No Tales” line heard during the ride. You can also hear him as The Ghost Host in The Haunted Mansion attraction as well as the voice of Professor Ludwig Von Drake in many of the earlier animated cartoons. Thurl Ravenscroft is a Disney Legend and croons as several of the singing pirates on the ride. His voice can be heard all over the Disney Parks, including Walt Disney’s Enchanted Tiki Room (as Fritz, Tangaroa and some of the Tiki Masks), Country Bear Jamboree (as Buff), and as the lead singing bust in The Haunted Mansion (his face is also projected on this bust). Thurl was also a former narrator on the Disneyland Railroad and, though non-Disney, the famous voice of Tony the Tiger. And to toot his horn one final time he also sang the original, “You’re a Mean One, Mr. Grinch.” Check out these guys’ resume, you’ll be amazed at their extensive voiceover work!

7. The Chess-Game That Never Ends

As you wind your way around the queue paths at Magic Kingdom’s attraction to get to the loading dock, you’ll get the opportunity to see two skeletons sitting on opposite sides of a table with a chess game between them. Rumor has it that the game is a stalemate, arranged to look like a match that simply can’t be won. However, online photos of the moving pieces throughout the years suggest that this isn’t exactly the case. Sources say that the pieces were accidentally moved during a minor refurbishment and were not returned to their proper positions until someone found Marc Davis’s original sketches. Regardless of the Disney Imagineers’ ultimate intentions for this motionless match, these skeleton pirates won’t be ending this game anytime in the near future.

Have an extra ten grand burning a hole in your pocket? Yeah, me neither. But if you do and don’t mind a wait list several-years-long, you can become a member of this ultimate VIP Disney club. What does this have anything to do with The Pirates of the Caribbean ride? Well, Club 33 is located very close to Disneyland’s Pirates attraction. After you exit the ride, blink and you’ll miss the entrance. The door, upgraded just recently along with the rest of the fancy-shmancy restaurant, is slightly classier than the old entrance but still reflects the elusive greenish-grey paint which will purposefully not draw your attention. While on the Pirates of the Caribbean ride, as you pass by the Blue Bayou restaurant, there is a second story balcony that appears to be a façade. Whispering sources will say this balcony is part of Club 33.

Even prior to the renovation of the attraction at both parks which incorporated elements from the popular films, there were changes and modifications to the original ride/script. The original incarnation included scenes where the pillaging and plundering pirates, while on their quest to raid the towns, were lustfully seeking out and chasing giggling female villagers. There was also a scene where a slurring swashbuckler, termed the “Pooped Pirate,” was exhausted from his skirt-chasing and chatted with guests about the “fine wench” he was pursuing, even offering to share her if he found her. Public outcry ensued in the 90s, berating Disney for including scenes deemed sexist. Alterations to the attraction followed—the women now chased the pirates who were carrying stolen food, and the chatty and uncensored pirate went from pursuing a lady to pursuing a treasure map. Curiously, the auction scene still exists to this day despite these other deviations. The changes were not well-received by all, either. X Atencio, one of the attraction’s original script writers, called the so-called “improved” version, “The Boy Scouts of the Caribbean.”

The entrance really sets the stage to this attraction, both in Disneyland and Magic Kingdom. The Disneyland attraction is located in the New Orleans portion of the park, evoking an antebellum era of the city, and is partly inspired by the Cabildo building in Jackson Square. If you look above you as you enter the attraction, you’ll notice the ornate initials of Roy Disney and Walt Disney entwined in the wrought iron railing. At the Magic Kingdom attraction located in Adventureland, you will approach a golden Spanish fort called Castillo Del Morro which is guarded by the Caribbean watchtower Torre del Sol. This building is inspired by Castillo de San Felipe del Morro in the Old San Juan in Puerto Rico. Both versions of the ride are strikingly similar, despite their differentiating themed location. Worth mentioning: That squawking barker bird that used to greet you at the entrance of Magic Kingdom’s version of the attraction has been removed but can still be seen at Downtown Disney in the Pirates of the Caribbean section of The World of Disney store.

That space above the ride at the Disneyland Park? It was going to be Walt’s private apartment. Instead, the second-story opened up for retail business and as a museum space until 2007, when it underwent major refurbishment and became the Disneyland Dream Suite. Like the Cinderella’s Castle Suite (which was also originally intended as a suite for the Disney family and executives), these rooms are now meant for specially selected guests to enjoy. Don’t bother trying to get a hotel reservation at either location. It just won’t happen. If you sprinkle enough Pixie Dust on yourself prior to arriving at the Park, you might just get the once-in-a-lifetime opportunity to stay there overnight (but probably not).

2. Pirates WISH They Had This Kind of Treasure

The total cost of New Orleans Square where the Disneyland version of the ride is located is upwards of $15 million ($8 million of which was spent on Pirates of the Caribbean). Now that’s a whole lot of loot, even for a Pirate, and especially back in the time the original was built. Crazy enough, this amount equals what the United States paid for the REAL New Orleans as part of the Louisiana Purchase of 1803.

There’s no bones about it, real human skeletal remains were once used in the Pirates of the Caribbean ride. When the ride first opened in 1967, the Imagineers—wanting a more convincing setting—were able to obtain real skeletal remains from the UCLA Medical Center. The skeletal remains have since been returned for various reasons but to this day people INSIST that there is one remaining human skull seen during Disneyland’s attraction. Cast members have “confirmed” this, but I’d be remiss to believe everything that comes out of a Cast Member’s mouth (see our article, 8 Terrible Disney Myths That Won’t Go Away). Still, it does look awfully convincing if it’s fake. Keep your eyes peeled for the skull that sits above the bed in the treasure room at the beginning of the ride and decide for yourself.

Start planning your next swashbuckling Disney trip with an Authorized Disney Vacation Planner. They’ll help you get the best price for your vacation, share their expert advice and their services are totally FREE!