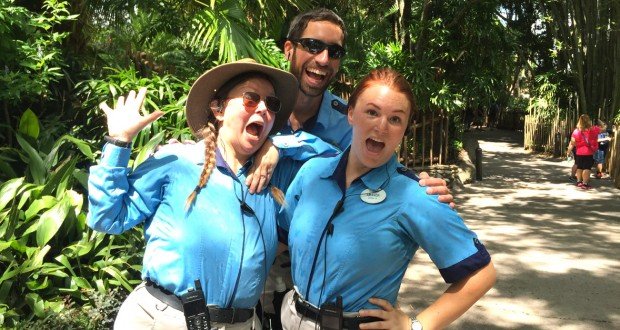 8 Inscrutable Requirements For Being A Cast Member in Disney Parks

Many Disney lovers know from their very first visit to the Disney World Resort that they will be returning for many more vacations over the course of their lives. The truly hardcore Disney fanatics however, know from their first moment in a Disney park that they never want to leave! It’s not enough for them to experience the magic – they have to be a part of it! While it can sometimes be just as magical an experience to work at the Disney Resort as it is to visit it, Disney does have some advice as well as requirements for their Cast Members to ensure that interaction with guests is up to Disney’s standards of courtesy and show. These rules include guidance on a Cast Members appearance, grooming, and behavior. Here are just a few things that potential Cast Members need to know about working at the Disney World Resort:

8. “You control your destiny.”

The Disney World Resort is the largest single-site employer in the United States, with around 65,000 Cast Members working at the resort at any given time in a large number of departments. When you walk into the Disney World Casting Center for the first time and you’re asked what position you’re applying for, you need to be ready with a couple of work areas that interest you. Disney is constantly advertising for help, so you can always apply for an area of need. The worst thing you can do is ask what’s available. With that many employees, there is turnover everywhere so there is usually availability in every department. They will tell you (without an eye roll, if you’re lucky) to narrow it down to a couple of areas that you’re interested in. So speak up! If you always wanted to work in the Haunted Mansion, let them know. You might not get that position right away, but they can put you in an attractions role and you can always look for availability at your preferred location after you’ve proven yourself.

7. “Of all the things I’ve done, the most vital is coordinating those who work with me.”

There are a number of different job types available at Disney World, including seasonal, internship, contract, and temporary work. Chances are, however, that you’ll either be looking for full-time or part-time work. In past years, full-time was designated as working at least five days per week and part-time was designated as working at least two days per week. Now however, Disney asks that part-timers be available a minimum of three days per week – and that includes nights and holidays. And full-timers are required to have full availability – any shift on any day of the week. And that includes nights, holidays, and weekends.

Many people know about the Disney Traditions class that new Cast Members are required to attend. It is also informally known as the “point with two fingers” class, due to this bit of advice being among those that Cast Members learn. (Pointing with one finger is offensive in some cultures, so Cast Members are trained to point with two fingers or the entire hand.) You also learn that you will always be on cleanup duty because picking up trash is a requirement for all Cast Members, not just those in custodial roles. That goes for those working in the parks all the way up to the executive team. And keeping the property clean requires that you learn the “Disney swoop” – a specific way to pick up trash. But Traditions class is also a lot of fun. There are teambuilding exercises that introduce you to your fellow Cast Members, quizzes to test your knowledge about Disney characters, history, and movies, and other fun challenges to immerse you in the Disney culture and welcome you into the Disney family.

No matter how big of a Disney fanatic you may be, no one comes into the role of a Cast Member knowing everything there is to know about the Disney resort. The story goes that a Cast Member should never say, “I don’t know.” The truth is that a Cast Member can say those words, so long as they are followed by the words, “but let me find out.” A Cast Member is required to find an answer for the guest or find someone else who can provide it. It’s all part of providing the best possible guest experience.

One of the things that sets Disney’s Cast Members apart from employees at any other company, apart from their courtesy, is the consistency of their look. Cast Members receive a Disney Look book upon being hired by the company to ensure that they comply with all of Disney’s rules regarding personal grooming before they even show up for Traditions on their first day. For men this includes neatly cut hair that doesn’t extend over the ears or past the collar, and if mustaches are preferred they must be neatly trimmed and not extend past the corners of the mouth. For women this includes hair that is neatly brushed and easy to manage, is naturally colored, and if highlights are preferred they must be no more than two shades different from the base color. While this may seem excessive, it ensures that Cast Members are consistent in their professional look.

3. “I’m sorry I bit you… and pulled your hair…and punched you in the face.”

In addition to grooming rules, Disney naturally has specific requirements for the behavior of their Cast Members. Some of these rules are simply common sense and identical to rules you might possibly find at any other company. These include prohibitions against smoking, using a phone, chewing gum, or eating in front of guests. (However, due to the Florida heat and the fact that many Disney Cast Members have job locations that are far from break areas, some Cast Members are allowed to drink from a water bottle while on duty.) Most companies usually don’t go so far as to dictate facial expressions and body positioning though. But Disney requires that Cast Members do not frown and that they do not slouch or otherwise display bad posture. This is all in the interest of meeting the Disney keys to a great guest experience, which starts by being approachable. A smile and good posture welcomes guest interaction while slouching and frowning discourages it.

Even the glasses and sunglasses that a Cast Member wears must conform to specific requirements. Both the style and the color of the frames must be conservative, with no visible logos or brand names. If sunglasses are allowed in a particular department, they must not have overly dark or mirrored lenses. The guest should be able to see the Cast Member’s eyes, as always to provide positive guest interaction. Above all, the glasses must not detract from the look or theme of the costuming.

It pretty much goes without saying that with all of the conservative requirements that Disney has for the look of its Cast Members, tattoos and piercings – apart from traditional ear piercings on women only – are strictly forbidden. Cast Members may have no visible tattoos or body piercings, earlobe expansions, or any other body modifications. “Visible tattoos” does leave the door open for fans of ink to work at the Disney World Resort, but it requires that their body art be covered at all times. Those Cast Members can usually be spotted most easily at the height of summer as the unfortunate ones wearing long sleeve shirts!

In calling their employees “Cast Members”, Disney reveals that they consider their employees to be “on stage” whenever they are in a public area. As such, they expect their Cast Members to have good stage presence in both their attitudes and performance. And while some of the rules may seem over the top, there’s no denying that it all contributes to Disney World being the most magical place on earth for its guests!