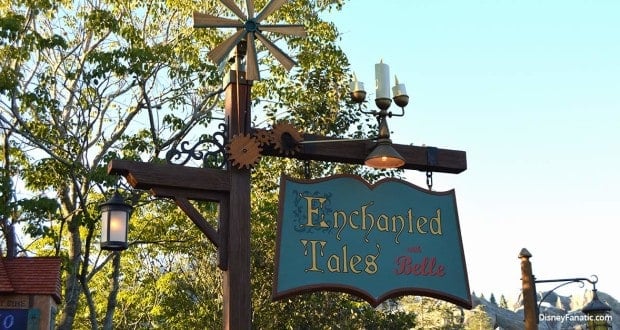 From the moment it opened in the New Fantasyland of Walt Disney World’s Magic Kingdom, Enchanted Tales with Belle has been one of the more popular attractions in the park. This is evident in the number of Fast Passes that are used by guests to see it. However, even the word “attraction” doesn’t truly cover what Enchanted Tales with Belle really is. It’s certainly not a ride, but it’s also much more than a character meet and greet as well. Perhaps the most accurate description would be “interactive story and character experience”. This experience takes guests from Maurice’s cottage to the library in Beast’s Castle for a special celebration of the day Belle and Beast fell in love.

Disney Imagineers really went above and beyond in creating this attraction. Most guests will find it a whimsical and delightful experience. Though some older guests without children may find it isn’t their cup of tea, even they will have to admit that the touches that were included in the attraction are quite impressive. Here are just a few of the things we love about Enchanted Tales with Belle:

While this attraction starts off in Maurice’s cottage and workshop, the wonderful detail begins in the queue area. Beast’s castle looms in the distance above the countryside, the fences around the line are assembled with a hodgepodge of items exactly as Maurice might be inclined to build it. Inside the cottage, there are many wonderful little details, from the marks on the wall that denote Belle’s height as she grew up (and which many guests measure themselves against) to the portrait of Belle as a child with her mother. Belle’s favorite book sits on a stand, and there are little decorative touches all around that you may recognize from the movies. In Maurice’s workshop, drawings and models are scattered all around while a music box in the background gently plays “Human Again” which true Beauty and the Beast fans will recognize from the special edition DVDs and stage show.

While in Maurice’s workshop, we are introduced to the one item that doesn’t truly fit in with the rest of the room. A mirror with a gilded frame – a gift from the Beast – hangs on the wall. We are told that it allows Maurice to visit Belle at the castle anytime he wishes. Then, to the amazement of guests, the mirror magically comes to life and smoothly expands to the size of a door before opening to allow everyone to make their way into the castle. It is a simple yet amazingly effective bit of Disney magic that really sets the stage for the rest of the attraction.

Carrying that feeling of magic from the mirror in Maurice’s workshop on into the castle are the animatronic characters of Madame Wardrobe and Lumière. It’s nearly impossible not to smile when listening to Madame Wardrobe greet the guests and begin to discuss the roles that she needs them to fill in the story, but the true animatronic marvel to behold is Lumière. The mechanical changes and improvements that Disney included in his design were worthy of a separate patent, for externally actuated figures. The end result is that Lumière’s interaction and gestures are so smoothly performed you could truly believe he’s alive.

Disney has long sought to include guests in the action, and Enchanted Tales with Belle is the epitome of this philosophy. Children and even adults are invited to do some role-playing in a reenactment of the day Belle and the Beast fell in love. Madame Wardrobe lists the actors that will be needed and a Cast Member makes the selections. Children will be given the bulk of the roles – as they should be – but frequently a couple of adults are chosen to play roles as well. The guests that are selected are given some simple props to hold or to wear during the re-enactment of the “enchanted tale”. While there aren’t enough roles to let every child be a part of the action, the Cast Member has the ability to stretch the cast a little bit by making some children play dishes – the ones who think the grey stuff is delicious. If none of the children from your party are selected for a role, it could obviously dampen the overall experience somewhat. But it seems like the Cast Members do try to spread the roles around to limit that possibility.

After being escorted into the library and greeted by Lumière, the actors take their places while the rest of the guests are seated on benches. Lumière calls for Belle, who makes her entrance. They tell a much abbreviated version of the story of Beauty and the Beast with the help of the cast of guests. They then parade around the library and turn in their props. It’s simple and silly, but children just love the whole experience.

Immediately after turning in their props, the Cast Members who were in the performance are lined up to get their picture taken with Belle in front of the fireplace and Lumière. Children who were not chosen to be in the cast might be able to have their picture taken with Belle after the cast is done. It may depend on the wait time that the attraction is experiencing, but I have seen several children be accommodated with a picture in one show, and I’ve seen Belle leave immediately after taking pictures with only the guests who were in the actual performance. Your best bet is to approach one of the Cast Members to request a picture while the cast is being photographed.

Every guest that is in the performance is also given an Enchanted Tales with Belle bookmark that is adorned with a picture of Belle, her signature, and the quote “You’ll Always Be Part of My Favorite Story”. If your child wasn’t in the performance, all you have to do is ask a Cast Member for one and they will be happy to provide it. The Enchanted Tales with Belle bookmark is frequently mentioned as one of the best free souvenirs to get at the parks.

While flash photography and video lighting is prohibited in the attraction, you are welcome to take all the pictures or video that you’d like. However, another great feature of Enchanted Tales with Belle is that a PhotoPass photographer is stationed in the library to get pictures of all the performers during the show. If you have purchased Memory Maker, all of the pictures from the performance will be loaded to your account. Yes, you’ll have a few pictures of people you don’t know, but it allows you to enjoy the show rather than be preoccupied with trying to get a good photo of your child performer in the low lighting.

Enchanted Tales with Belle was a wonderful addition to the New Fantasyland in the Magic Kingdom. Have you experienced this attraction? What was your favorite part?