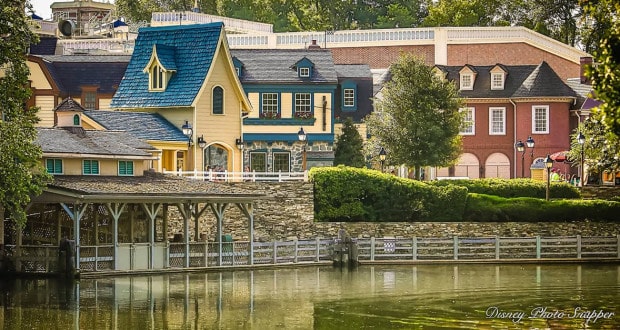 The old time Wild West greets you when you enter Magic Kingdom’s Frontierland, a place where the happy plucks of banjo strings and the smoky aroma of turkey legs follows you down clapboard building-lined streets resembling those of America’s pioneer homeland. Boasting some of the park’s most beloved attractions, you’ll find everything from one of Magic Kingdom’s original features—The Country Bear Jamboree –to the scream-inducing “thrill rides” Splash Mountain and Big Thunder Mountain Railroad. Tom Sawyer’s Island—an enchanting island spotted with caverns, forts and barrel bridges, and accessible only by river rafts—is a place where your kids’ imagination is sparked to life and where you can relax and daydream under an endless canopy of oak and pine trees. In Frontierland you’ll find some of the best food Magic Kingdom has to offer, and you’ll meet some of the friendliest cowboy boot sporting, plaid wearing, denim clad Cast Members around who will no doubt play a role in your magical memory making vacation. A quick and simple walk through this “antiquated” Magic Kingdom Land and you’ll undoubtedly miss out on all the wonderful delights the frontier-themed area has to offer. We’ll shine some light on some interesting little tidbits and experiences you might not have known about Frontierland so that you can truly appreciate and enjoy all the uniqueness found in this section of the park! Let’s take a journey westward and perhaps discover something new!

8. The Notorious Banjo Brothers and Bob

The name itself gives me a good chuckle but actually seeing/hearing these guys in action provides some serious knee-slapping, rootin’ tootin’ laughter. We love everything about them—their corny one-liners, their insanely talented old-timey instrument playing, and their harmoniously blended singing of some of our favorite Disney and western classics. Your cheeks will hurt from smiling so much when you take some time to watch their fun little performance on the streets of Frontierland. You can find them out for 20 minute durations in the afternoon and early evening hours daily. They are a Disney experience not to be missed!

This is a wonderful little hidden gem that Disney does not advertise on their daily itinerary. It’s a flash-mob style hoedown featuring Disney characters such as those lovably huggable Country Bears, Clarabelle Cow, Brer Rabbit, and Horace Horse Collar, as well as lively western clad dancers. There is line-dancing, square-dancing and just plain skipping around to some upbeat country favorites, all along the streets of Frontierland in front of The Country Bear Jamboree attraction. The times may change daily, but you can generally find them pouring into the streets around the early evening hours. Ask a Frontierland Cast Member for more specific times on when to expect them to appear on the day you arrive.

Tucked away in the back nook of the Splash Mountain attraction line you’ll find a character meet and greet featuring Woody and Jessie, as well as an adorable little play area for the little ones in your party. This playground is completely shaded and is a perfect spot to hide away and watch your kiddies run around and release some pent-up energy. It’s by no means a large playground but has a few little spaces for your little ones to duck inside and romp around, and features a small toddler slide. This is also a great spot to tag out with another adult in your party, taking turns watching the little ones not tall enough for the Splash Mountain attraction while you let one another enjoy the log-flume ride.

Regardless of whether or not your sharpshooting skills are up to par, you can have a great time at this fun Frontierland shooting gallery. This arcade is original to the Magic Kingdom Park’s opening, standing the test of time throughout the years of the park’s evolution. Even though this Disney experience has been around since Magic Kingdom first opened its gates in 1971, the attraction got a bit of a face-lift in 1982. Originally, the guns shot lead pellets (yes, you read that right!) instead of the now infrared laser lights. Due to the high cost of maintenance—they found themselves repainting the targets almost every night from the pellets constant friction— and no doubt for safety issues, they replaced all 97 targets with sensors that the infrared beam projected from your rifle will activate.

Unique to Frontierland are the various pathways one may choose to take where Liberty Square ends and Frontierland begins. The unique design element features two walkway options on either side of the main passageway—the raised wooden planks that line the stockade-type structures and western buildings on one side, and the boardwalk that lines the Rivers of America on the other. This not only creates a variety of unique sights for each park guest to experience while moving through Frontierland, but also generates a huge capacity to move people along without this section of the park becoming too congested and crammed with park goers.

Speaking of the wooden planks that line the buildings, these uneven, raised platforms are a historically accurate feature that would be consistent to the buildings of the old west. Though the Magic Kingdom features pristine, clutter-free walkways, the roads of the authentic west would have been quite dusty. The raised wooden sidewalks in that era were designed to keep boots and skirts clean from the dirt of the roads.

Disney Imagineers sure have a knack for sneaking in really fun details into their design elements, keeping us fanatics on our toes looking for these hidden gems around the Disney Parks. One such detail can be found on the signage of the Frontier Trading Post, a merchandise shop located in Frontierland. Beneath the name of the store, the sign reads, “Texas” John Slaughter—Trail Boss. So who is this John Slaughter, and why is his name splashed across the sign as the owner of this quaint souvenir store? Turns out, not only is “Texas John Slaughter” the name of a classic TV western series produced by Disney in the 50s and early 60s, but “Texas” John Slaughter is also an actual person born on October 2, 1841. He is a well-celebrated hero of the 1800s and early 1900s, and stands as a symbol of the American West boasting an impressive resume as a Civil War veteran, trail-driver, cattleman, Texas Ranger, famed Cochise County Sheriff, professional gambler, and an Arizona State Representative during his lifetime. The next time you duck into the Frontier Trading Post, give a little nod to the famous “Texas” John Slaughter and also to the Imagineers for that well-placed acknowledgment.

The Disney Imagineers always go to great lengths to make the transitions from one land to another as smooth and gradual as possible, blending together the ending of one unique section of the park and the beginning of another in a way that is not startling to park guests but rather subtle and seamless. In the movies, this gradual transition from one scene/image to another is an effect known as a cross-dissolve. Frontierland backs up to Adventureland and even shares some of the same buildings, though your average park guest would never notice. If looking at the buildings from an aerial view, the south side faces Adventureland, and the building facades reflect and enhance that theme. The north sides of the buildings face out toward Frontierland, the building facades—again—representing the western theme. There are even a couple of connecting areas in between these lands that have you moving from one realm into the other. The popular Pecos Bill’s Tall Tale Inn and Café located in Frontierland reflects architecture of the Spanish Mission style which was indeed popular to the Southwest desert region of that time period. In conjunction, those same Spanish design elements were also appropriate for Tortuga Tavern (formerly El Pirata Y el Perico) right across from the Pirates of the Caribbean, an Adventureland staple, which happens to border Frontierland. The merging of these two lands once again displays the Imagineers’ ingenuity and the in-depth attention to detail and design put into every facet of Magic Kingdom.