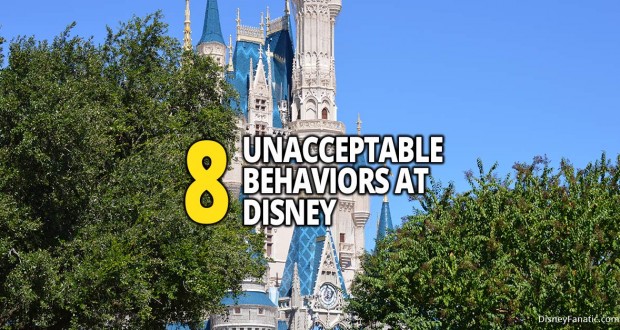 Walt Disney World is the most magical place on earth, a place where nothing bad ever happens and people are always on their best behavior, am I right? Okay, you can stop laughing now, for we all know how erroneously exaggerated and untrue that statement is. It is quite unfortunate that this land where people strive so very hard to project a fairytale-like innocence can become so easily tainted by individuals who don’t care to reign in their inappropriate and sometimes ugly behavior, subjecting us to the very thing we are trying to remove ourselves from while visiting the Parks. Listen, the human race isn’t flawless, and I’m not talking about the people who make innocent mistakes. I’m referring to the people who blatantly leave their manners at home and practically exude arrogance with their negligent, disrespectful and inconsiderate actions. Before you start getting a refund for your upcoming vacation, let me assure you, there are far more kind-hearted “Fezziwigs” than there are insensitive “Scrooges.” And unless you let them, the bad apples won’t spoil the magic, hard as they may try! Still, there are some behaviors that—especially now as a parent—I find downright reprehensible for a family-centered Park such as Disney World. Here is a list of 8 of them that I consider particularly unacceptable.

I can honestly say that things that didn’t bother me before I had kids can now make my blood simmer. While I can hold my breath around people who smoke, I know my kids aren’t going to, and the idea of them having to take in a lungful of second-hand smoke saddens me. Disney has designated smoking sections in several places at every theme park, yet there are people who choose to ignore these areas and light up whenever the urge so presses them. Listen, I have nothing against smokers in general. That is their choice. I don’t care for the habit myself, but have dear friends and family who smoke and love them just the same. That being said, if you are breaking the rules and smoking outside of these designated areas, you are implying you just don’t care about the people around you. Even though smoking outside of a designated area comes with a hefty $500 fine, it still doesn’t stop everyone from sneaking a smoke in unmarked places.

We’ve all been there on vacation—our patience is wearing thin, pushed to the brink of our sanity for one reason or another. The stress of a situation can be magnified while on vacation here, especially since you put so much effort, time and money into planning the trip out. Lack of sleep can be a factor, and the often grueling heat can also weigh heavily on you. Perhaps your children are at the “point of no return” and you’ve just about had enough. I’ve been there. Sometimes I have the urge to meltdown right along with my kids. While becoming exasperated and frustrated can be understood and almost expected, the way some people subsequently react can be mortifying. I have witnessed parents openly screaming at their children, no holds barred. I’ve seen family members and grown adults partake in loud shouting matches with one another—screaming and hollering and successfully creating their very own “attraction.” I do believe “expectations” factor in quite a bit during some of these tirades, but that is topic for a whole other article. The bottom line is there are plenty of ways to handle a situation without blowing-a-gasket and causing a scene.

I’ve known cast members and have been appalled by some of the stories they share of how some park guests treat them. For the vast majority of them, cast members are hard workers that often go out of their way to help people have magical vacations. We aren’t referring to the senior Disney execs here; we’re speaking of the people who are making standard pay, interacting with the park guests on a daily basis. It’s shocking that people use these workers as their proverbial “punching bag,” bickering at them when a ride unexpectedly shuts down or chiding them for the amount they have to pay for their bottle of water. It’s not the cast members’ fault. A little kindness goes a long way.

It’s a shame that people don’t feel the need to tame their tongue around impressionable children. Walt Disney World is a mecca for families and little ears are always listening. Offensive and foul language is something most people don’t want to hear themselves, much less their children.

I’ve never seen a theme park so incredibly diligent when it comes to keeping their parks clean. Disney has a superior system in place that allows the guests to enjoy a pristine and unpolluted property. Between the highly sophisticated underground waste-removal pipelines to the attentive clean-up crew who are constantly sweeping the walkways and swiftly picking up errant trash, these grounds are consistently free of debris. This should never be an excuse, however, to carelessly toss your trash wherever you see fit. Littering is a no-no, plain and simple, no matter WHERE you are, these Parks being no exception.

I don’t care to get into The Great Debate over alcohol inside the Parks. The mass opinion on this matter will never uniformly align and that’s just fact. Whether you are for it or against it, however, most people CAN agree that an overly imbibed, obnoxious/sloppy drunk is never cute, especially within the confines of a family-centered theme park. Know your limits and behave responsibly.

Sometimes they are sneaky about it, and other times they practically taunt you with their brazenness. The line cutters win the Most Egocentric Award, carrying a narcissistic mentality that they deserve to NOT have to wait in line just like everyone else. It’s rude. We can spot them a mile away too—we all know you aren’t “meeting up” with your Great Aunt at the head of the line. And let’s just pretend for a minute that you are. The practice of “holding” spots in line for a large group of people while they enjoy another ride is also not acceptable. There are exceptions to “line-holding,” of course. I personally do not care if, say, a spouse is saving their husband’s and child’s spot in line so they can use the restroom or grab a water, etc. I am also considerate of those with special needs and realize waiting in line can be difficult, to say the least. (As a special note: If you have someone in your party that due to a special need cannot wait in long lines please visit Guest Services for information on Disability Access Service Cards). Outside of legitimate line-holding reasons, skipping ahead is not tolerated by Disney and can earn the violators a one-way “Fastpass” straight out of the Parks.

Once upon a time, long ago, I had secured a prime parade spot, shady and close enough to high-five the characters when they came down the street. I was standing with my family and as the parade began, I bent down to hand something to my daughter. When I stood back up—I kid you not—I practically took in a mouthful of the person’s hair in front of me that had taken the opportunity to squeeze into the 2-inches I left open when I turned my head for a few seconds. They were standing THISCLOSE to me and I swear came out of nowhere, materializing like one of The Haunted Mansion’s ghosts. To blatantly wedge in and block the view of other people who were there first is incredibly rude and undeniably obnoxious. These self-centered, inconsiderate and “entitled” mentalities boil my blood, and there is no excuse for this kind of rudeness.