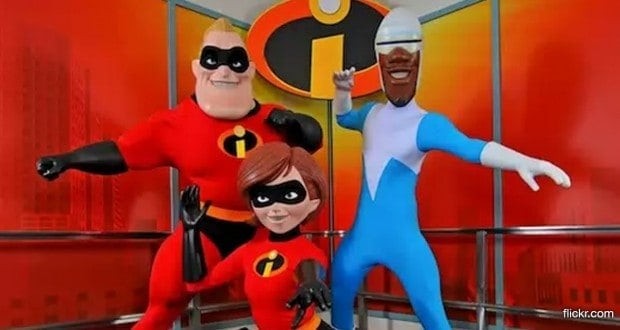 Each day guests enjoy attractions at Walt Disney World inspired by the most popular Disney films. However, there are a number of fan favorites that are considered “underrated Disney movies” that don’t have a strong presence in the parks, or any presence at all. Some films like Tarzan had a short-lived presence in the parks, but others didn’t get much placement. So let’s take a look at some underrated Disney films we’d like to see at Disney World and how they could possibly be incorporated into the resort.

This Pixar film would make for an excellent dark ride attraction. Just imagine being able to slide along as Edna Mode shows off her line of super suits or moving through the jungle as the Incredibles dodge the villains. Then move your way right in the middle of the final battle with the action happening all around you. With a sequel in the works (release date to be determined) Disney fans have shown their love for the film and it deserves to have its own attraction.

Hercules would make for a great on-stage show at Disney’s Hollywood Studios. With its incredible soundtrack and not so sneaky pop culture references, it would work well with audiences. Currently, the film’s villains get some presence in the parks during Halloween and select Disney Side events, but where’s Hercules himself? And can we give the Muses some love? If not a show, then perhaps use Hercules as a way of promoting physical fitness and have kids “train” alongside the hero.

The only park presence this film has is kitten Marie’s appearance for autographs at the France pavilion in Epcot. Why not bring some of the jazz elements from the film into the park and create a Skat Cat band that plays at the pavilion? There isn’t much going on at this pavilion and it could use some energy. This would pay tribute to the film while exposing kids to a different style of music that they probably aren’t exposed to and give the country some night time entertainment.

Besides a meet and greet in Hollywood Studios and a brief appearance in the Celebrate the Magic projection show in Magic Kingdom, this film doesn’t get seen much in the parks. There’s a lot you can do with this film. It can be a dark ride, an addition to the Animation area of Hollywood Studios to show guests how video games influenced the animation style, or it could be a quick service snack area that has a Sugar Rush décor to it. Either way, fan want to see more Wreck-It Ralph.

A Disney film that pokes fun at itself, Enchanted combined fairytale animation and real world live action. It would be great to have something in the New York section of Hollywood Studios Seeing Giselle and Prince Edward interacting with guests in their personas from early on in the film would be wonderful. Or, create a gift shop that resembles Giselle’s clothing line from the end of the film with tributes to the fictional Andalasia inside.

Full of terrific one-liners, Emperor’s New Groove flies under the radar, but is one of the funnier Disney films to come out. While difficult to incorporate into the parks, you could add it to the Coronado Springs Resort. Does anyone want to see Kuzcotopia? The waterslide and thematic elements from the movie would go great in the pool area. The film inspired a sequel and a TV series, so there is interest in seeing these characters, especially the lovable sidekick Kronk.

2. The Princess and the Frog

With so much focus of the film being placed on Tiana trying to get her restaurant, you’d think Disney would be sure to include it in their parks. Seeing Tiana’s Palace as a real table service restaurant with flavors inspired by New Orleans would help bring the film to life and increase the film’s presence besides a meet and greet in the Magic Kingdom. A band like the one shown in the film could play on stage and portraits of Tiana and Naveen’s family could serve as décor. Let’s give this Disney princess her dream and make this a reality.

Another underrated Disney film, Meet the Robinsons is visually stunning and sends a clear message to keep trying no matter how many times you fail. Even quoting Walt Disney’s, “keep moving forward,” motto, the film inspires viewers to pursue their dreams. Due to the creative nature of the film, the Imagination pavilion would be the best place for this film. Either as an attraction, a restaurant, or a play area, there’s a lot to work with in terms of architecture, costuming, and creativity.

Not every film Disney creates is going to make it into the parks, but these films have been fan favorites and should be incorporated more than they already have. There’s more to Disney than the princesses and classic characters. These films deserve some extra love from the parks. What films would you like to see in Disney World?