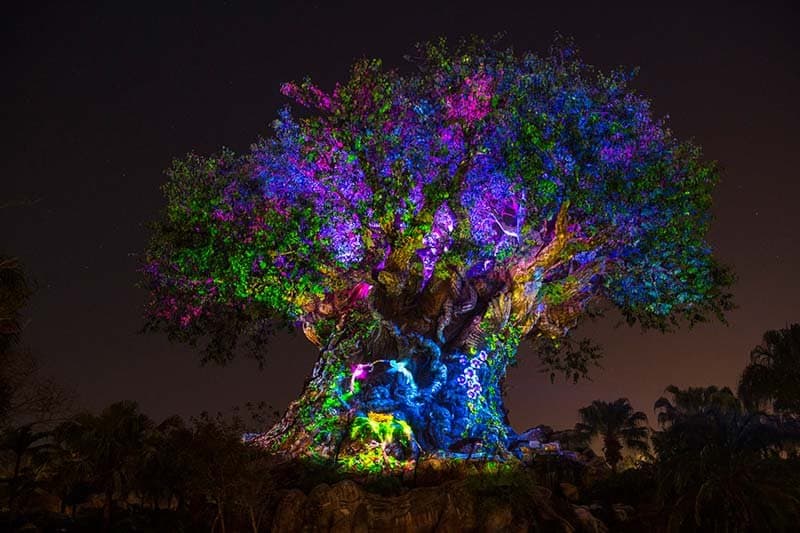 There is a lot to see in Animal Kingdom when the sun goes down!  In Pandora – The World of Avatar, the Valley of Mo’ara comes to life with bioluminescent exotic plants and walkways lighting up the night.  Use sound and touch to interact with the local flora, and watch how their glow changes!  You should also be sure to catch Discovery Island Carnivale, which features music, dancing, and stilt walkers in a celebration of the beauty of nature.  This dance party happens several times a night.  Finally, make sure you experience Tree of Life Awakenings, where the iconic centerpiece of Animal Kingdom flickers magically to life thanks to the spirits of the animals carved into its trunk.  This occurs about every 10 minutes once it gets dark and continues until closing time!

3. Embark on an Evening Safari

Whether you’ve ridden the Kilimanjaro Safaris more times than you can count, or you’ve never ridden it before at all, Animal Kingdom’s evening hours now provide you with the unique opportunity to check out the animals after dark!  It truly is a different experience at night, with some animals becoming much more active after the sun goes down and the temperatures are cooler.  Disney has placed lights in the attraction that supply a little illumination to the exhibits while not interfering with the animals’ nocturnal behaviors.  Some animals, like the bongos, are hard to see during the day, and virtually disappear during evening safaris.  Other animals, like the lions, have been known to become much more active and vocal in the evenings.  The evening hours that Pandora prompted have resulted in a truly amazing experience on the safari ride that you’ll love!

The move to longer hours for Disney’s Animal Kingdom impacted guest dining habits as well.  Visitors to the park previously had to eat their evening meal at Rainforest Café, conveniently located near the park’s entrance, or more often than not, outside the park.  Pandora not only gave park guests a reason to stay later and therefore dine at Animal Kingdom’s restaurants in the evenings, it provided another eatery as well with the opening of the Satu’li Canteen.  And the healthy, flavorful dishes that it serves have been garnering rave reviews ever since!

With the addition of evening hours and a later closing time, Disney’s Animal Kingdom was finally able to add a feature that has been a staple of the other three theme parks – a nighttime spectacular.  Rivers of Light is an end-of-the-day show that features water and light effects, pyrotechnics, performers on boats, and DisneyNature footage projected onto water screens.  This peaceful show truly caps off your visit to the park with its wonderful displays, stirring songs, and focus on nature. Whatever you do, don’t let the larger crowds and new challenges keep you away from the park.  While Pandora – The World of Avatar may have changed the way you do things when visiting Disney’s Animal Kingdom, good planning will alleviate a lot of the stress and reduce the number of problems you’re likely to encounter.  The updates have made Animal Kingdom into a much more entertaining park!

Left 1 of 1 right
Next: Fast Pass Flubs - 15 Attractions You Should Fast Pass to Avoid the Lines at Walt Disney World