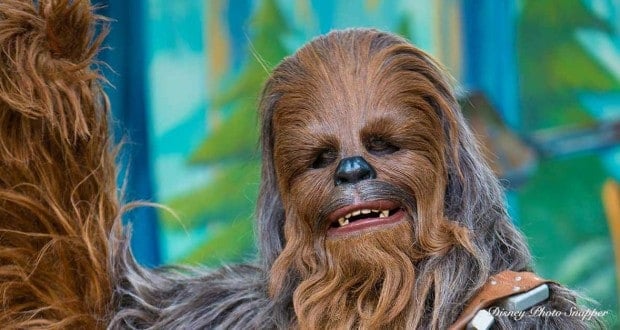 When it comes to Star Wars, there’s no denying that the Force is strong at Disney World – which is why we’ve put together the Star Wars Fan’s Ultimate Guide to Walt Disney World. So forget your navicomputer and your star-chart and read on…

It goes without saying that the remote trading outpost of Batuu is the place to be for any Star Wars fan at Disney World. As well as all food outlets and stores, there are the themed land’s two signature attractions, Millennium Falcon: Smugglers Run and Star Wars: Rise of the Resistance. There’s also Black Spire Outpost, a large settlement set amid a photo-worthy landscape. There are plenty of other photo opportunities throughout Batuu too, so be sure to capture as many memories as possible during your Star Wars adventure.

We can’t mention Black Spire Outpost without talking about Star Wars: Datapad. Download Play Disney Parks mobile app and transform it into Star Wars: Datapad, a device with which you’ll be able to interact with droids, scan objects to reveal hidden treasures and hack into and decode transmissions at Black Spire Outpost. The settlement is a place the Resistance desperately defends, but you can choose to be on either side of the war. You’ll also be able to link some of your secret missions with Batuu’s two main attractions.

If you’re looking for something more retro than the other Star Wars experiences, look no further than Echo Lake’s ever-evolving 3D simulator Star Tours – The Adventures Continue. After meeting C-3PO and R2-D2 in audio-animatronic-form, you’ll board a Starspeeder 1000 and launch into hyperspace. You’ll evade the Empire – or the First Order – and encounter many characters as you go. The changing characters, battles and settings make Star Tours one of Disney World’s most unique Star Wars adventures.

There are plenty of Star Wars character sightings at Disney’s Hollywood Studios inside Star Wars: Galaxy’s Edge. You may spot characters such as Chewbacca, Rey, and her nemesis Kylo Ren just to name a few! You may even spot the Storm Troopers patrolling.

Described as the most “immersive” hotel experience, the Halcyon will transport guests to a faraway galaxy, allowing them to enjoy views of space from their windows during the 2-night experience, while being free to explore their surroundings and interact with other passengers, crew and characters. Guests will also be able to travel from Star Wars: Galaxy’s Edge to the ship via Launch Pod, making for a seamless transition between the world of Batuu and orbit. Once on board, your very own unique Star Wars journey will unfold…

While we still wait for an official date for the highly anticipated Star Wars: Galactic Starcruiser, we do know that it will be docking with Disney’s Hollywood Studios this year. For more information on all things Star Wars, be sure to visit Disney World’s official website.